Welcome back to our latest Pro-Follow with professional contractor Steve Wartman. The same homeowners that had Steve build a shed and build a deck hired Steve to build an in-law addition to the side of their home. This is a major project, involving all the different trades and will probably take a couple of months to complete. Steve brought in Victor and his crew from Luciano Cristofaro Contractors to build the foundation, and so far they have dug the footers, laid rebar and passed inspection. If you missed anything, read through those links to get up to speed.

All of our Pro-Follows are the result of shadowing licensed contractors at actual job sites. If you enjoy learning from the pros, become an email or RSS subscriber and never miss an update. Check out all of our how-tos, including completed Pro-Follows, in the Project Guides section. 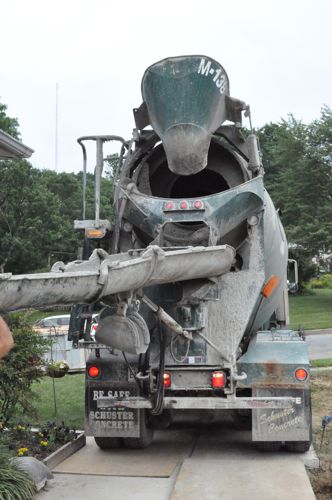 The concrete truck arrived, and since the weather is still relatively mild no admixtures were necessary. For this job they used 3500 psi concrete which is more than adequate for this application.

Pro-Talk: Admixtures are ingredients added to the concrete such as accelerant (used in cold temps), retardant (used in hot temps), and air entrainment. Admixtures are used to adjust setting time, improve frost resistance and more.

Pro-Tip: Refer to Chapter 18 of the International Building Code for concrete psi requirements.

Pro-Talk: Slump refers to the concrete slump test which measures the workability of fresh concrete. Imagine concrete compacted into the shape of an inverted cone. Slump measures how far the concrete sags due to gravity. The lower the slump value, the tougher the concrete is to work.

Once the shoot was assembled, Victor and his crew started pouring concrete, and altogether the footers needed about 12 yards of concrete. 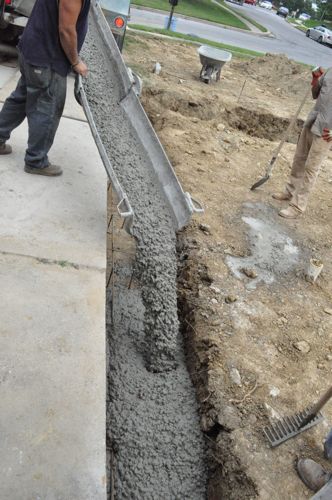 You can see they poured just enough concrete to completely cover the rebar. 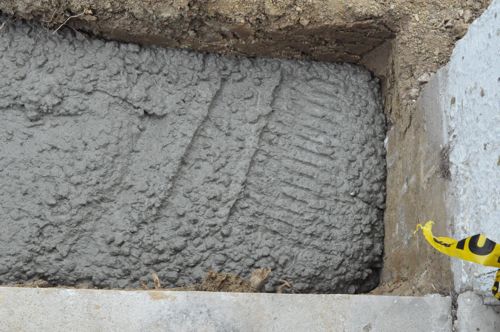 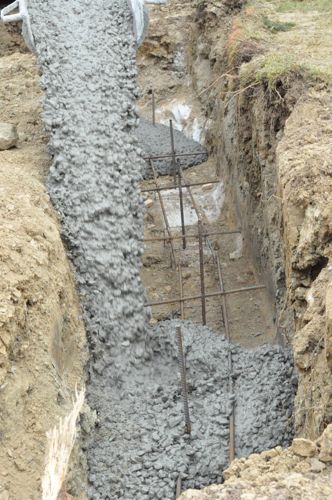 At times the chute wasn’t long enough, and the guys lined up wheelbarrows to move the concrete. 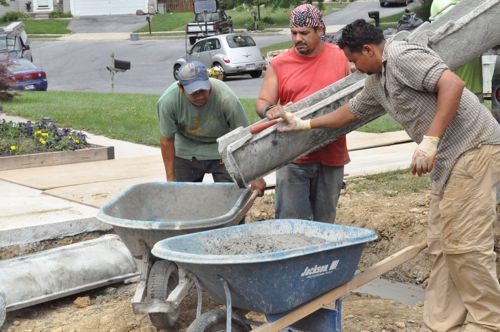 Using a shovel, the guys worked the concrete around to eliminate any air pockets and help the concrete to settle. 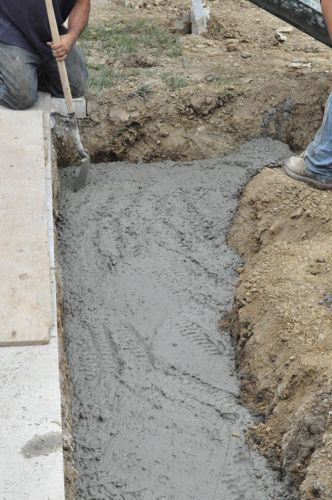 Next, Victor and his crew would use a rake to even out the concrete, sometimes raking and sometimes tamping. 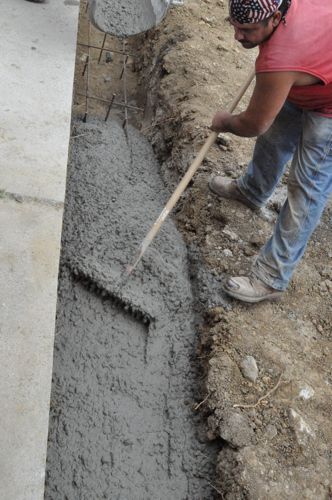 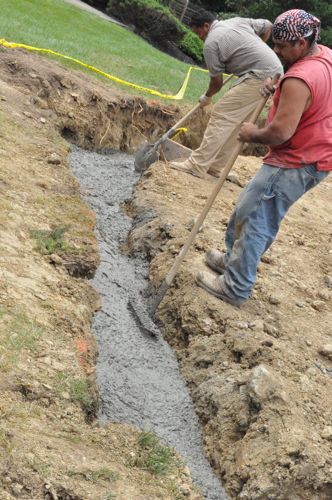 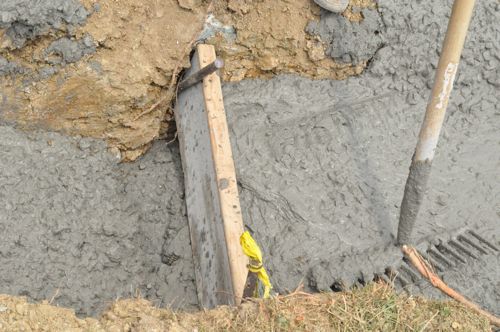 After the surface was evened out, the guys checked for level by placing a 4′ level onto the concrete. 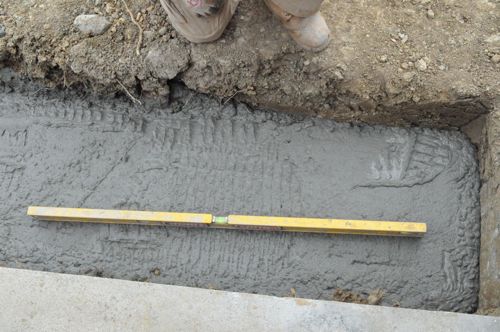 If the surface was off, they’d sprinkle some more concrete over the area until it was level.

Pro-Tip: While achieving a level pour is important, slight inaccuracies are not a problem because they can be eliminated with mortar when the guys begin laying block. 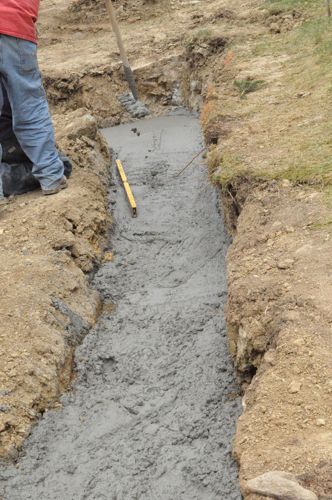 Using the same level, one of Victor’s crew would strike-off the surface of the concrete to give a smooth finish. 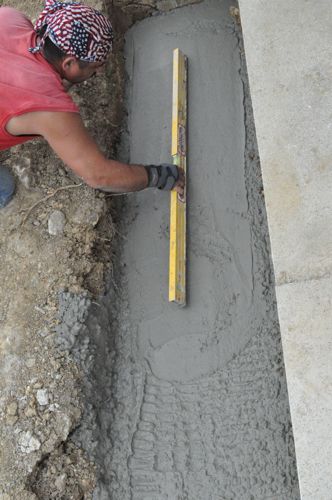 In the picture below, you can see how the concrete “steps” down at the form, saving a significant amount of concrete. 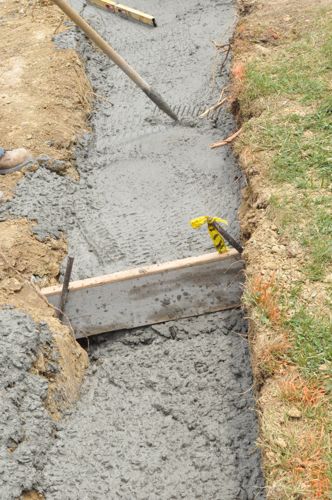 At this point, the guys needed to stop and let the concrete cure before any further progress. 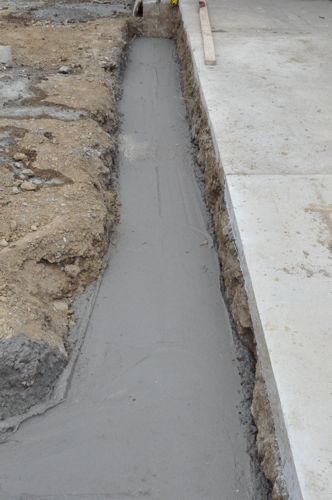 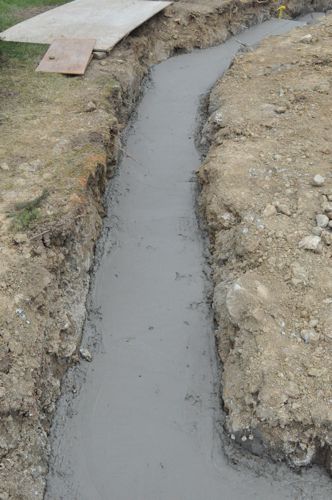 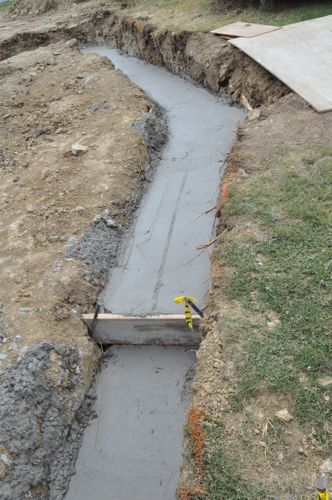 Up next, Victor and his crew will be laying block to build the foundation so stay tuned.