Deck Railing Posts: Inside vs. Outside of the Rim Joist

When we designed and contracted to have our deck built last year, I did’t think too much about the railings.  We knew we wanted traditional rails without any special features like a sunburst.  We ended up with traditional 2×2 pressure treated southern yellow pine balusters fixed between parallel 2x4s at the top and bottom.  It’s plain, but it’s just what we were looking for. 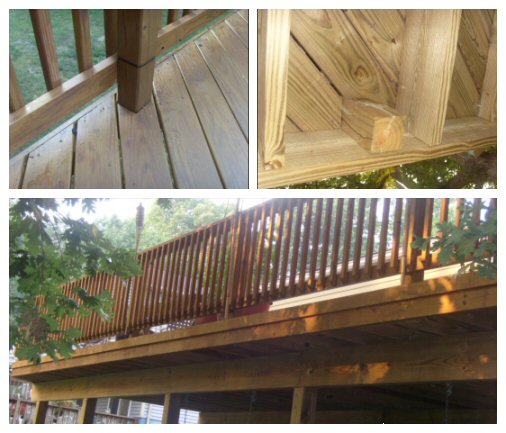 This simple design works well because the balusters are fixed close enough together that there’s no chance of the kids’ heads getting stuck between them.  And, the 3″ gap between the bottom 2×4 and the deck surface makes it much easier to sweep debris off the deck vs. if the balusters were attached directly to the rim joist. (Our previous deck was constructed that way). 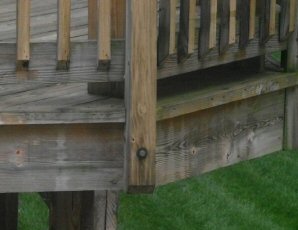 One thing we were pleasantly surprised with was how our contractor attached the deck railing posts to the rim joist (a.k.a header board, or fascia).  Instead of the posts being attached on the outside, as shown to the right, our contractor cut holes in the deck surface and installed the railings on the inside of the rim joist.  This creates a much cleaner look on the face of the deck.  It also means the bottom of the 4×4 doesn’t have to be cut to sit partially on top of the deck, making it stronger.

This style of installing deck rail posts was popularized by composite decking companies because it is impossible to sheath a 4×4 post with a vinyl slip when it is installed on the outside.  Even though initialily popularized by the CDCs, this works just as well with traditional pine, redwood, and cedar decks, and is pretty easy to do yourself if you’re building your own deck.   Here’s the steps:

What do you think? Do you have a preference for railing posts?  Did your deck have any railing innovations?