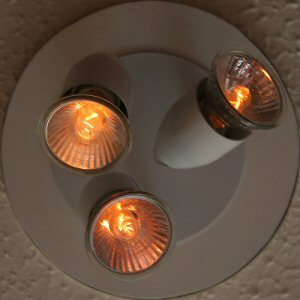 Dimmer switches are one of those great modern marvels that make life better… They can set the mood for a romantic evening, or keep you from squinting when you’re waking up in the morning. We’re installing four dimmer switches that will control the overhead lighting in our basement, and figured you might want to know a little bit more about how this life-improving gadget works.

Back in the olden days, dimmer switches varied the voltage that traveled to the lamp using a rheostat, basically an adjustable resistor that would sit in a serial electrical circuit with the lamp.  When the dimmer was set to full brightness, the rheostat applies little resistance, allowing the full voltage to travel to the lamp.  When the dimmer was set to low brightness, the rheostat applies a high resistance, converting some of the electrical energy into heat.  The result: the dimmer switch could get hot – not as bad as a small oven sitting inside a wall plate, but enough to pose a fire threat. These dimmers were extremely inefficient – they wasted about 50% of the energy at quarter-brightness – not such a great trade!

Travel forward to the present day.  Today’s dimmers work by very quickly turning electricity on and off 120 times per second using a device called a TRIAC. The result is that a lamp is on less often, thereby emitting less light.  Because the on/off action happens so quickly, our eyes can’t detect the flicker. The benefit: much more of the electricity heads straight to the lamp, and little is wasted to heat. Even with the improved efficiency, however, some power is still consumed in the on/off switching mechanism (between 1% and 3%).  This energy is converted to heat and must be dissipated through the wall plate into the room.

Dimmers dissipate this heat by heat sinking the electronics in the dimmer switch with the metal faceplate at the front of the dimmer.  Take a look at this picture of the four Leviton digital fade dimmers installed in a four-gang box in our basement: 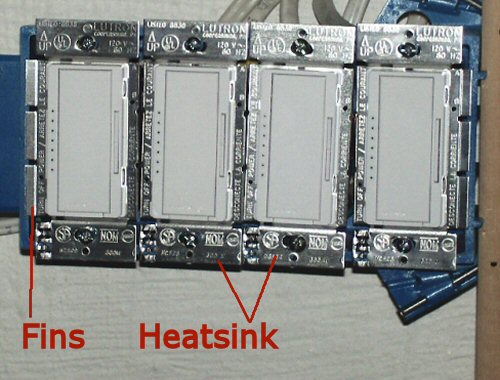 Each of the dimmers has a metal surface plate for heat sinking. See how the two outside Dimmers have fins on their exterior edge, while the inside dimmers have no fins? According to Leviton, a dimmer switch with both sets of fins intact is rated for 600 watts, with one set of fins intact, 500 watts, and with no fins intact, 400 watts.  The limitation is because a dimmer with fewer fins cannot dissipate as much heat. So, our overhead lighting in each zone will be limited.  For the two outside switches, the limit is 500 watts, and for the two inside switches, 400 watts.  We plan to use energy efficient dimmable CFLs, and expect each circuit to carry only 200 watts.

Maximum Watts on a Dimmer Switch

Dimmer switches are usually rated for 600 watts.  Always check the specific dimmer switch you plan to install for wattage limits.

Back in the day, a typical dimmer switch would be limited to controlling six 100 watt fixtures.  With today’s energy efficient lighting, 100 watts of traditional incandescent output can be achieved with a 23 watt compact florescent.  Theoretically, that same dimmer switch could control more than 25 of these lamps.  Just another reason to make the switch to CFLs…

What do you think? Do you use dimmers in your own home?  Ever give a thought to the electronics behind them?