The River Analogy for How Electricity Works 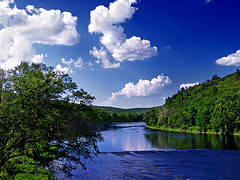 Updated 3/13/09 to include additional details.  This article originally ran on  12/11/08, and despite the lack of comments, it’s one of my favorites (and one I still read to remember how electricity works).

Electricity: We all use it.  Most of us take it for granted (at least until the utility bill comes).  But can we explain it?  I picture one of my sons coming up to me in a few years and asking how electricity works.  Sure, I could describe that a power plant makes electricity; it travels to our house on power lines and eventually through the house wiring to outlets and fixtures.  But that probably wouldn’t answer his question all that well.

So, in preparation for that inevitable day, I’ve been pondering a river analogy that I vaguley remember from high school.  This explanation is by no means perfect, but it gives a great mental picture that is useful for adults and kids alike.

Voltage: The Slope of the River

Resistance: The Width of the Riverbed

Current: The Amount of Water Flowing past a Point on the River over a Fixed Time

Current (I, measured in Amperes) is the water flowing on the riverbed at a fixed position on the river for some period of time.  Current must be constant throughout the river. If more water is dumped in the river at a higher point, that same water must be flowing at the bottom of the river.  In our electric model, this makes sense because if you turn on a light in your house that requires additonal current, that current must be pumped in by the power plant.

Energy: The Total Volume of Water that Passes a Fixed Point

Energy (E, measured in Kilowatt Hours (kWH) is the total volume of water that passes by a given point on the riverbed.  This analogy works particularly well because you can imagine the electric meter on the side of your house as measuring the volume of electricity that passes through the meter, just as a water meter measures the volume of water that flows in the main pipe to your house.

You can think of the riverbed itself as the conductors that run from the powerplant all the way to your home.  The cross section of a conductor correlates to the width of the river (see resistance above).

The power plant is the water source, or perhaps more accurately, the pump that moves the water from the bottom of the river back to the top. The plant produces electricty to meet all the demands of the consumers, just like a theoretical river pump would need to meet the water demands at the end of the river. Unlike the water pump in our river analogy, however, the power plant automatically adjusts to meet the demands of the consumer at the end of the wires. If the plant can’t keep up with the demands, we experience brown outs (a shortage of electric power), just like water users at the end of a river would run short on water if the pump were too slow.

This is a very imperfect analogy.  After all, a river’s water source does not adjust based on water demands at the end of the river like a powerplant does.   That said, the analogy goes a long way toward making a very complex topic understandable for the rest of us.

Elliot M. Rothkopf, College of Staten Island wrote an article that provides useful teaching analogies for electricity.  He doesn’t carry the river analogy through each example, but his article helped me remember the details of the lesson I learned in high school.  Also thanks to Fred K. who helped me refine this analogy.

What do you think? Did this analogy help you? How do you describe electricity?