Finally, the master bedroom is DONE! 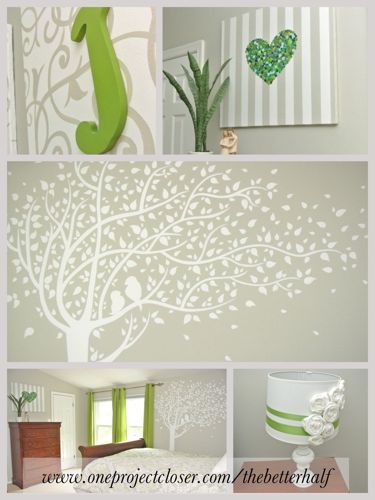 As I sat here on my couch to write about my big bedroom reveal, I was trying to figure out just how long I have been working on this project. 3 months….definitely longer than that. 6 months, maybe. 9 months, surely it hasn’t been that long. But Sadly, I think it was last summer that we painted and from there I made most of the decor. My head is hung in shame. For a project that I was so excited I literally dreamt about it, how could it take me almost a year?! Oh well, moving forward, I will aim for my next room redesign (the kitchen, hopefully) to take less time than that.

I had a hard time finding “before” pictures (not sure where they disappeared to), but here is our bedroom when we returned from our honeymoon to find our home pranked. 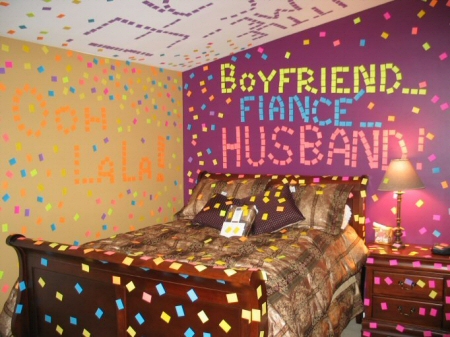 When Ethan and I first bought the house a few months before our wedding, Ethan moved in to work on it until I moved in after we got hitched. During that time, he and his friends tackled the big projects, like gutting the kitchen, and my girlfriends and I tackled the smaller, decor oriented projects like removing wallpaper (yuck!). The painting of the master bedroom was one of my favorite memories during that time because my girls, Kim, Amy, Leila, and Christy spent many a night at my soon to be home with a radio, a bottle of wine, and lots of laughs!

I had never been able to choose my wall color prior to this because I had rented, so I went a little crazy. Ethan and I picked out a rich, deep gold and purple bedspread (because it was all we could agree on), and I decided to paint the walls to match! Call me crazy because 3 walls were mustard/gold and the fourth was deep purple! At the time, we laughed at the suckers who would have to paint over that purple but turns out we were the suckers!  haha

We had spent many years in the dark cave of our bedroom, which we had envisioned being romantic, but really it was just dark. Now, years later, gray and white washed is in style, so I went with that!

I found this beautiful bedspread at Marshalls for CHEAP, I can’t remember now exactly how much, but I think around $40. I loved that it was nuetral in color, but had interest and a dash of green. Kelly Green is my FAVORITE color in the world, to wear and to design with, so I felt like this was the right fit. 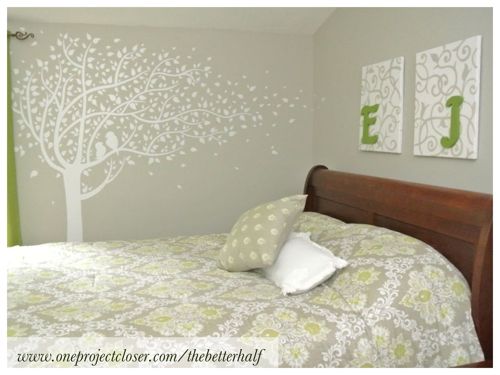 I also found these fabulous Kelly Green curtain panels for $16 each which I love! They add a pop of color in an otherwise very white and gray room. 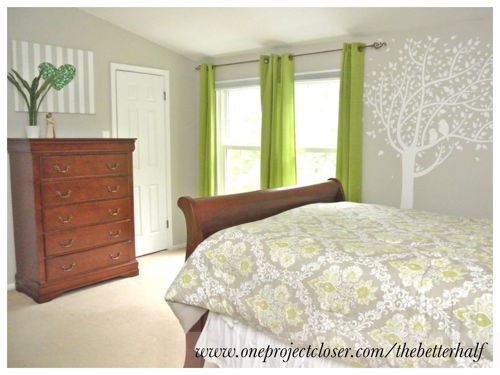 I wanted to paint the walls a light gray to match the bedspread and settled on Benjamin Moore Revere Pewter. We used the “Ben” line because it was the cheapest. I was very happy with the paint and how it covered the walls. We used one coat of primer on the purple wall, but otherwise only needed two coats of the Revere Pewter. Ethan and I and our very kind pastor knocked it all out in a day. Thanks, Mike! 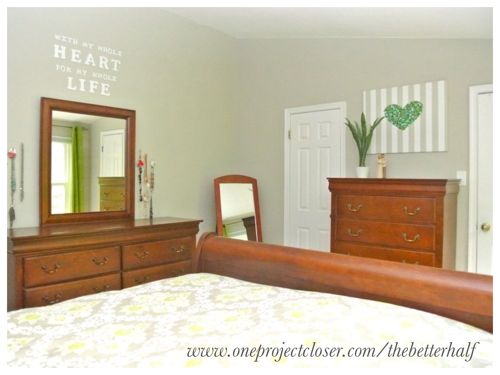 Next, I looked for a lamp for our bedside table but had a hard time finding something I liked that was’t super expensive. I decided to give the existing lamp a makeover instead. I spray painted the base white, bought a cheapo shade from Target, and then added flowers. I still love it to this day (almost a year later, lol!). Check out my previous post for a full tutorial on making your own DIY lampshade and  fabric flowers. 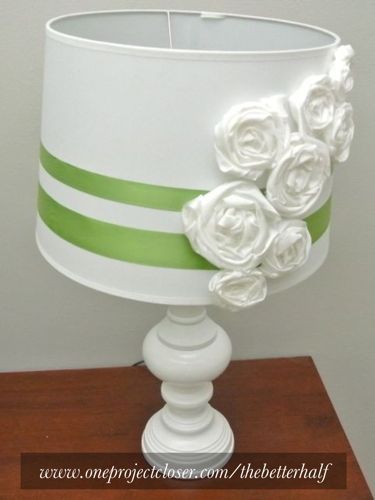 Not too long after the lamp, I found some $2 canvases at Goodwill (a rare steal) and transformed them into some amazing His and Hers Artwork! 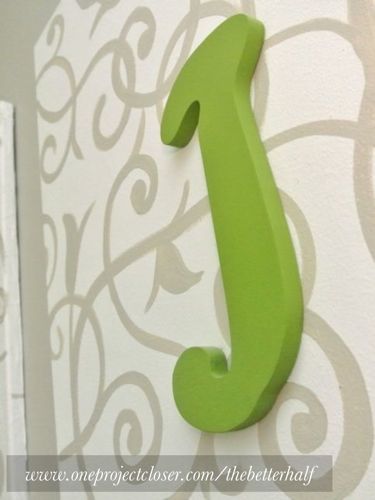 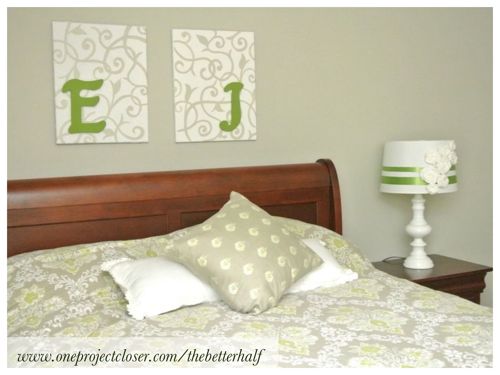 Then the holidays and the girls birthdays hit and I was sidetracked from working on the bedroom. Honestly I had somewhat lost motivation since the room was live-able and had something cute on the walls. But as I was thinking of what craft (and blog post) to do next, I started to plan more wall decor for our bedroom. I ended up making a button heart canvas (using another Goodwill find from the same day). It might be my favorite piece in the room! 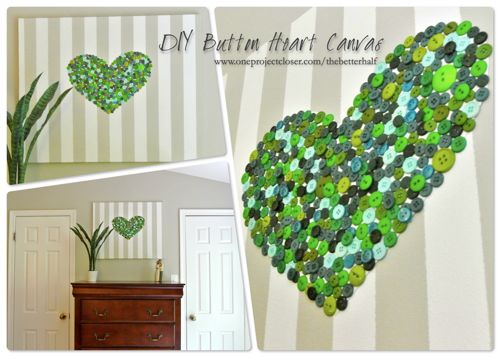 Originally I had planned on putting letters on that canvas instead of a button heart, but things didn’t work out. I still had the letters and wanted to do something with them, so I put them over my mirror using sticky tack. I found this saying on Pinterest from Girl Meets Life, “With my whole heart, for my whole life” and fell in love with it! 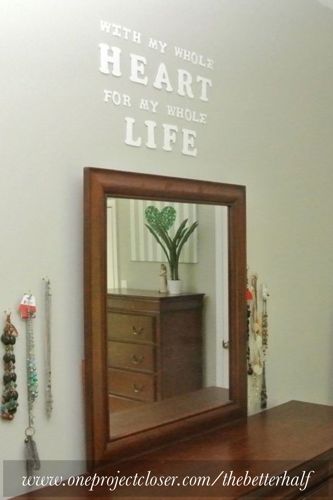 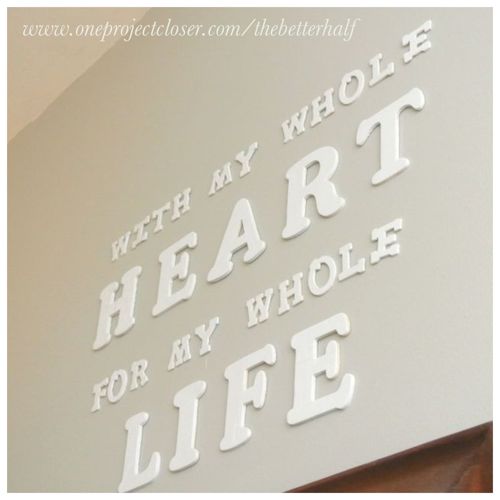 Finally, I had a vision for painting a tree on my wall. When I laid in bed and night and dreamed about it, it was a pleasant dream, skipping over all the long hours and tedium that was the reality! AHHH That tree just about drove me mad. Halfway through painting the leaves, I tried to make a stamp but it looked pretty horrible so I abandoned the idea. I free handed the trunk, branches and love birds onto the tree using for inspiration a wall decal I found on amazon. 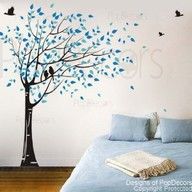 The wall decal cost $70 so I thought painting it would save me some money, plus I could customize the colors. Two weeks later I would have happily paid $70 if I could have bought the tree in white. Again, moving forward, I will choose to forget how much I hated painting this tree. lol! 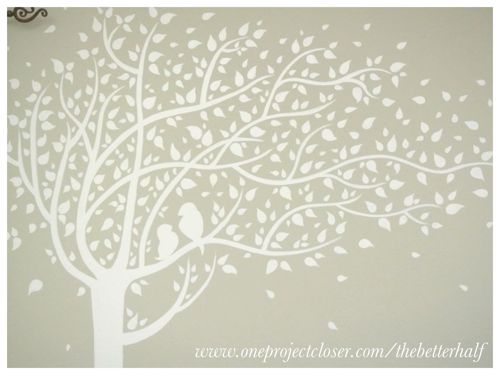 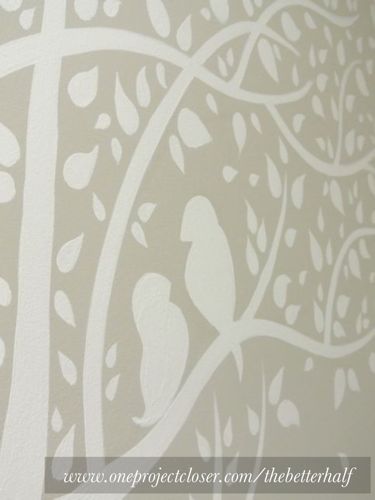 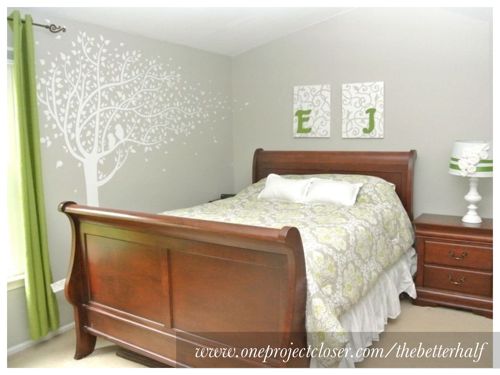 Now the room is finally DONE and I love it. The gray walls with accents of white and Kelly Green create a calm and fresh feel while also giving a flare of romance through the artwork.

What to do you think? What is your favorite design element? What should I do differently next time?