We recently installed a Frigidaire Gallery wall oven (model# FGEW3065KFA) from AJ Madison as part of our ongoing kitchen remodel (review of the oven itself is forthcoming). While branded Frigidaire, this model is actually manufactured by Electrolux, according to the manual.

We used the oven 3-4 times for baking, and then ran the self cleaning cycle to make sure everything was in order, and to clean up some of the mess from baking.

Immediately after running the self clean, the oven stopped working properly. Pre-heating the oven to 350 degrees took as long as two hours, and as soon as you opened the door, the temperature would drop 40-50 degrees and take another half hour to return to normal. This was a real bummer since it occurred just seven days before Christmas Eve when we were expecting the whole family for dinner!

We called Frigidaire’s warranty hotline and they directed us to three local repair shops. Of them, Metro Factory Service was the most helpful. Metro sent a guy out within 24 hours to take a look. He surmised the problem immediately: a blown thermal fuse in the back of the oven… or it could have been a relay in the control panel, but since he could hear the relays firing, the fuse was the most likely culprit. 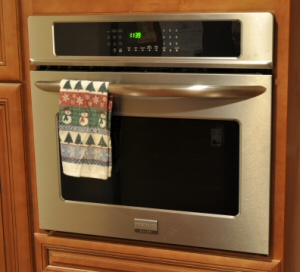 He ordered a new part from Frigidaire/Electrolux and scheduled a follow-up for the morning of Christmas Eve (great service from Metro, by the way!!). It turns out that the part he ordered wasn’t actually a fuse, it was a breaker and could have been reset just by pushing the button on it. The manual wasn’t clear on that point (he said many of them aren’t). The breaker is located under the metal housing in the very back of the oven. The repair man decided to replace the switch with the new one in case the other was too sensitive.

Remember, always turn power off at the main breaker panel when working on an appliance. 220 volts can be lethal.

He replaced the switch, reset it, flipped on the main breaker, and a working oven was restored.

In case you’re wondering why the oven heated up slowly as opposed to not at all, the reason is that the thermal breaker sits on only one leg of the 220v line. When it blows, you still have 110 volts coming in from the other half of the circuit, but this isn’t enough power to heat the oven up to really high temperatures. The 110V line that remains also powers the front panel and the circulating fan, so the oven “appears” to be working fine, even though half of the heating capacity is shed. We were somewhat surprised that Electrolux didn’t include some type of error code on the panel when this happens.

Here’s a close up shot of the switch in the back of the oven. (Sorry, angles weren’t good for a great picture here). 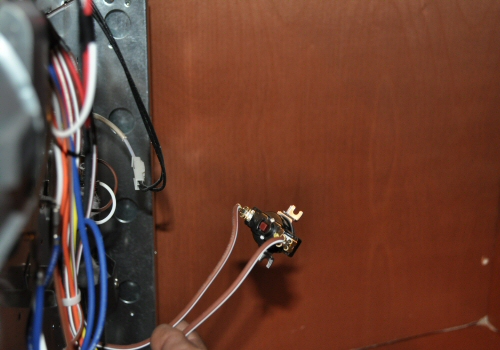 And here’s a real close up of the switch itself. 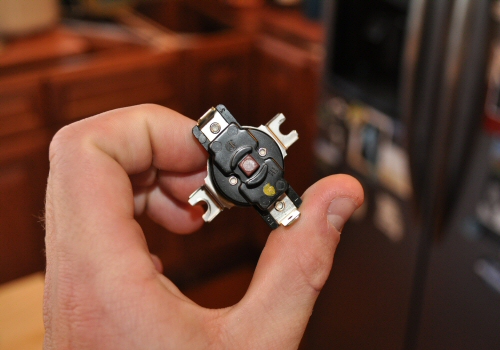 Hopefully this helps someone out there on the ‘net one day soon. I searched all over for an answer to the problem and couldn’t find a clear, concise one anywhere. If you end up in this situation, you can indeed turn off the breaker, pull the oven out, and press the button to reset it. Just be careful (and, as always, follow our advice at your own risk!)