How to Install a New Door Knob and Deadbolt 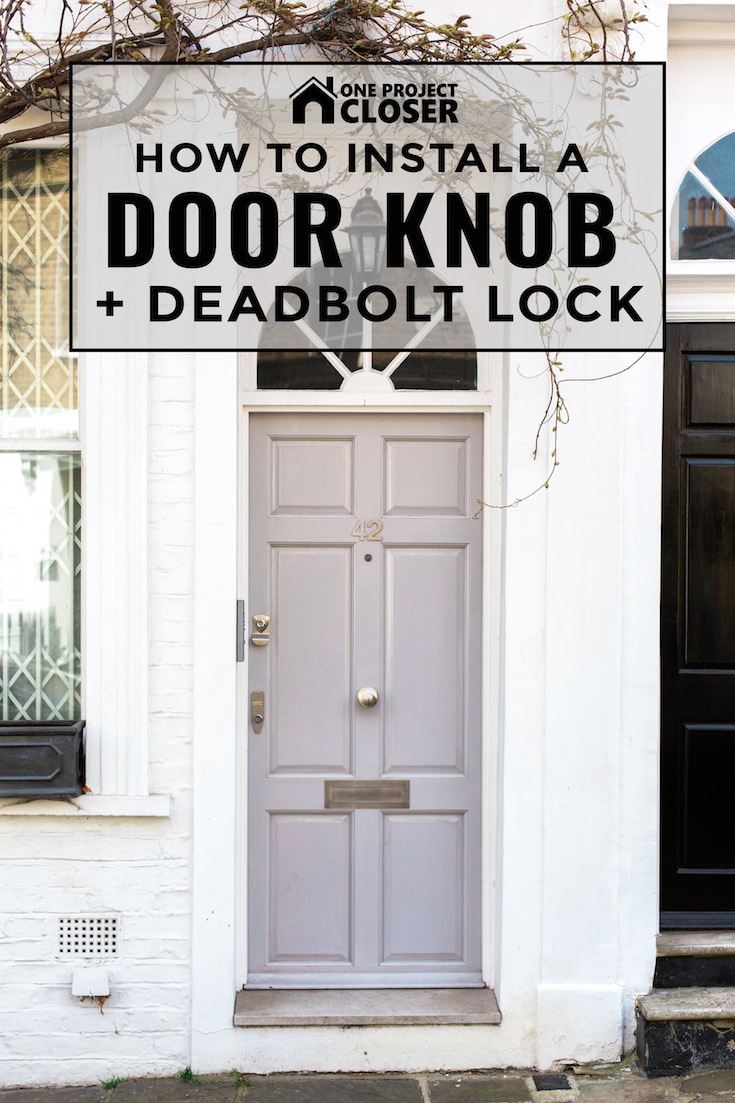 One of the questions readers are repeatedly asking us is how to install a door knob and deadbolt. Fortunately, replacing existing door hardware is an easy project because you don’t have to worry about mortising the door or door jamb (like you would for a first-time installation). Swapping in a new knob or deadbolt can be done in as little as 15 minutes if you know what you’re doing. I tackled this project last weekend, and I took a lot of pictures so you can know what to expect when you change out your hardware. 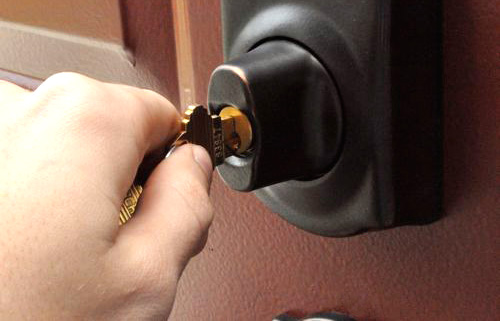 Remove the Old Knob or Deadbolt

Removing the old hardware is usually a simple process. Most manufacturers will have two screws that are accessible on the interior assembly. After you back those out, the interior and exterior assemblies can be removed. I’ve seen an older Schlage deadbolt that required the key to be turned part way before you could access the screws, and sometimes there are hidden releases or covers that conceal the fasteners. The latch or deadbolt is commonly secured with two screws into the end of the door. After you remove those, the latch should slide free. 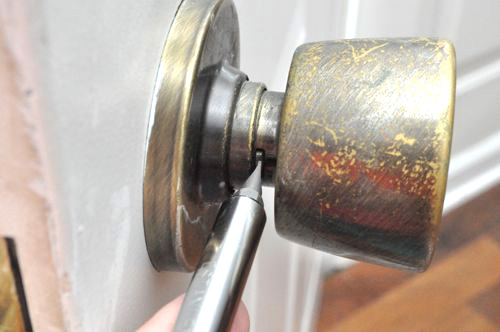 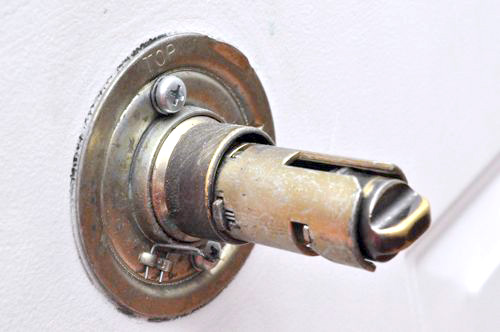 I’ve found it helpful to purchase new locks of the same brand as the old one to better avoid problems with hole size/ spacing. No matter what, here are some questions you should be able to answer:

Make sure the new hardware will work with the holes in your door, otherwise you’ll be making another trip to the home improvement center.

The pictures below show a Kwikset deadbolt and door knob. The process to install a Schlage or other competitors product is very similar. 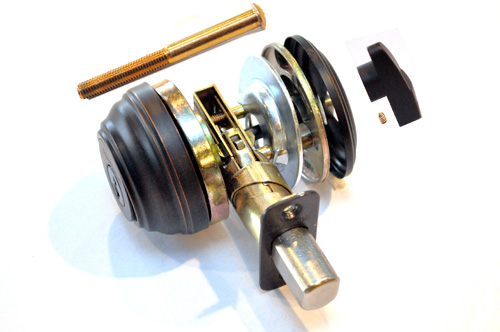 Deadbolts will have a “this end up” arrow (or even the word) stamped on the side that will let you know how it should be oriented, and many can be adjusted for either backset distance. For instance, on the deadbolt below, it’s a simple matter of rotating the face of the deadbolt to the other position. 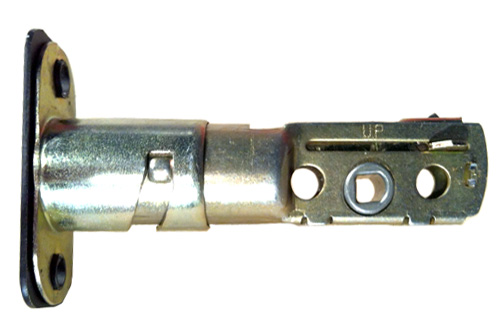 Once you have the deadbolt screwed in, slide the outer cylinder in place. That metal collar should only be used for 2-1/8″ holes. Discard it if the hole diameter is 1-1/2″. The rod that extends through the latch is asymmetrical so it only fits one way (the correct way). 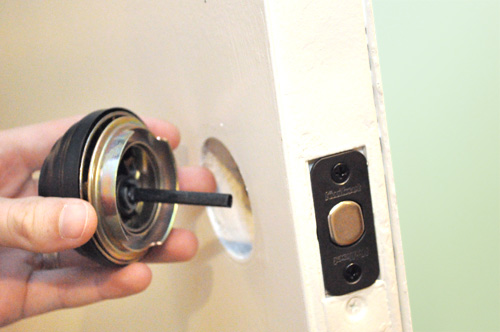 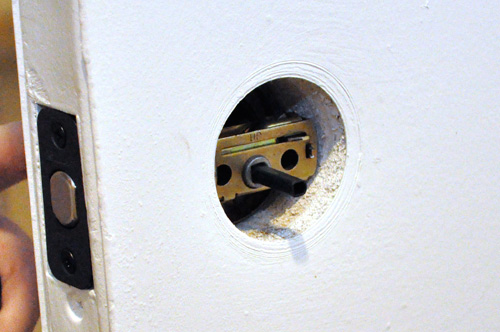 The inner assembly goes on with the silver-colored piece underneath, and it’s all held together with two long screws. If there’s a faceplate, that snaps on next. 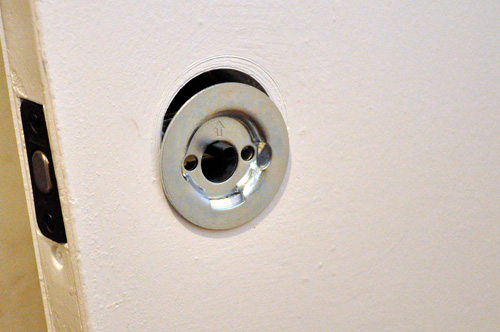 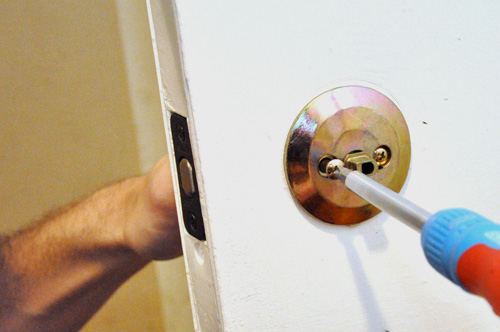 Kwikset often secures the thumb turn with a tiny set screw. Schlage keeps everything together as one piece and eliminates this step, but you’ll be able to see the screw heads. The last step for installing a deadbolt is to put the new strike plate on the door jamb. 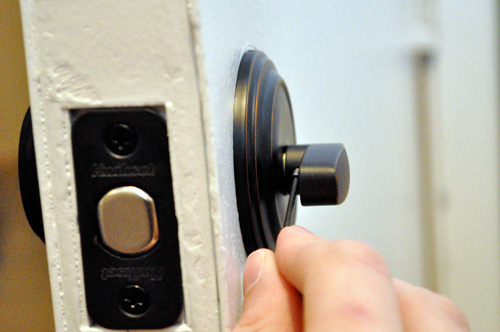 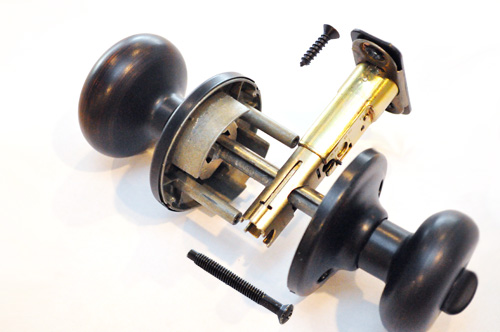 The steps to install a new door knob aren’t very different from a deadbolt. Start with setting the backset on the latch. Unlike a deadbolt, this is usually accomplished by flipping a pin to the correct position. When you put the latch into the door, make sure the face hits the strike plate and not the other way around. 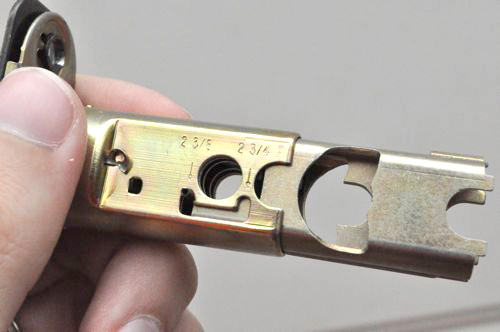 Put the outside knob on, feeding the rod through the latch. 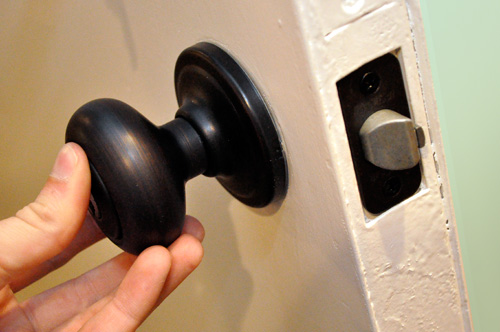 Now, slide the inside knob on and tighten down the two screws. Unlike the deadbolt, Kwikset keeps these screws easily accessible. Finish it off by installing the new strike plate on the door jamb. 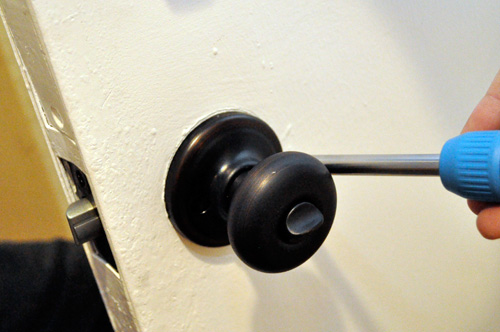 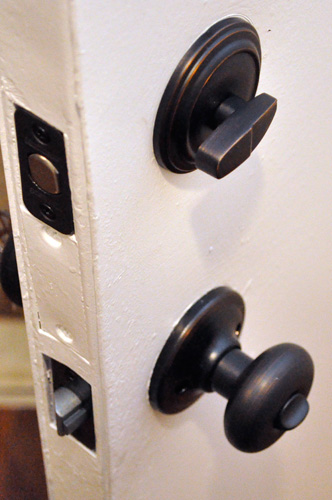 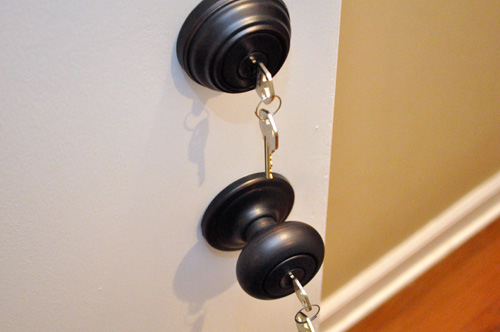 Kwikset offers re-keying technology (see link in related content section) that should help keep all your locks on one key. That’s another reason to select one manufacturer and stick with them because Kwikset and Schlage keys are not interchangeable.

Editors Note: Schlage has dicontinued its SecureKey technology that enabled homeowners to re-key locks. However, Schlage will continue to provide customer support and honor warranties on SecureKey locks.