How To Install a Rim Joist 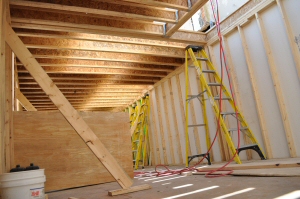 This week, we’ve been reviewing elements of the reconstruction of an end-unit townhome we worked with Habitat for Humanity in the Sandtown community of Baltimore, MD. The major project we supported was the installation of a second floor on the house, which included installing engineered wood I beam joists, and ultimately the installation of a plywood subfloor.

Between these two project steps was the installation of a solid 2×10 rim joist on the end of 2×10 engineered wood I beam joists, and an alternative I beam joist blocking solution that was required on the edge closest to the adjacent townhome where a rim joist could not be installed.

Rim board installation is relatively straightforward; however, the installation details vary by the materials selected for the joists and rim board. For instance, some rim board / joist combinations require 8d/10d nails, while others might dictate 12d/16d nails. Follow manufacturers instructions for the materials you are using and be sure your solution meets the code in your area. Always consult a professional for this type of work. You want the structure of your house to last forever. 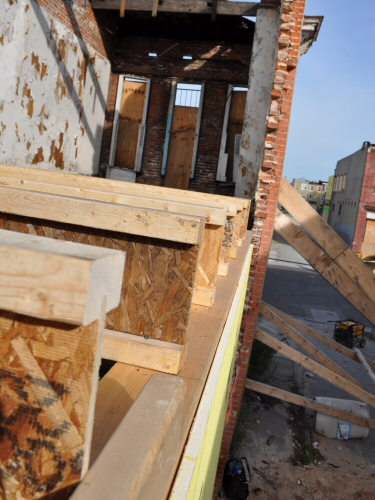 When you install the rim joist, it is imperative that the wood I beam joists are vertical and not leaning or twisting in any direction. These joists are designed to bear load only when installed vertically, and the rim board plays an important role in keeping these joists from twisting, and becoming weak. When plywood is added to the surface, after the rim joist is installed, the solution is an extremely strong and well-supported structure.

Cut and place the first rim board in place. It is likely that the rim board will need to be installed in a few sections (one piece of lumber will not be long enough). Butt joints should be made between wood I joists (as opposed to on them) to avoid nailing close to the edge of the joist top or bottom plate and splintering. When the rim board is in place, you can manually drive a few nails into the wood I beam joists to hold it in place. 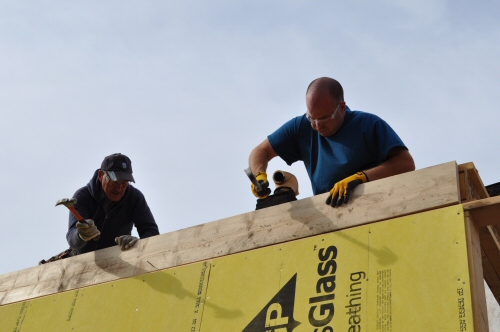 The rim joist should be toe nailed into the top plate below using the appropriate nail size (likely 12d or 16d nails, depending on the material). Toe nailing is accomplished by nailing through the face of the rim board diagonally down into the top of the wall plate. The concept is somewhat similar to blind nailing hardwood flooring.

At least one nail should be installed through the rim board into the top and bottom of each I beam joist. Some I joist manufacturers may allow for two nails. Finally, when then plywood is installed on the surface, subfloor nails (usually 8d) should be driven every six inches from the plywood down into the rim joist. Together, this nailing combination creates a very strong structure.

On the side of the house close to the existing townhome, we were unable to install a rim joist because it would be impossible to nail the board in place. (There is no access to the outside of the wall). To achieve a similar benefit, we installed wood I joist blocking between the existing joists. The goal of the wood blocking is to keep the wood I beam joists perfectly vertical, and so it is important that they are perfectly fit. 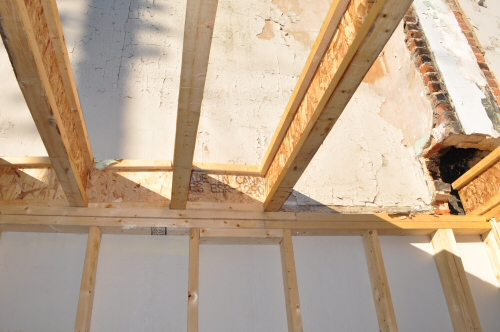 Note that this blocking required a lot of measurements and cuts, and should be securely fastened to the top plate of the wall, the joists on either side, and to the plywood on top (via nails every 6 inches). It is not an ideal solution because of the work involved, but it works to hold the I joists in place. Check with your local inspector / building code to see if this is an acceptable solution in your area.