Patching the Hole in my Shower

I mentioned in my last post that my plumber came out to reroute the shower controls. We had a separate hot & cold knob before but the new controls are combined- necessitating a few changes to the pipes. It was a job I was glad to pass along to a pro. The last thing I need is a leaky joint or an improperly installed rough-in. Plus, the job gets done a whole lot faster!

To gain access to the pipes, the plumber needed to cut a hole. There were two options. He could cut through the drywall in my hallway or remove shower tiles around the existing controls. I asked him to remove shower tiles because either choice resulted in replacing at least a few tiles. Here’s the hole that I need to patch. 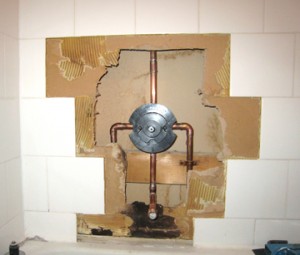 This is a tough hole to patch- wall studs are mostly obscured, irregular shaped hole, and I have to cut-out around the controls and faucet. I don’t want to remove more shower tiles only to replace them but I need to anchor my greenboard to something. After some thought (and a tip) I have this solution. Here it is, beautifully illustrated.

Step 1: Install 1 x 4’s
I’ll start by cutting some 1 x 4’s just short enough to maneuver into the hole. These will be attached to the backside of the existing greenboard by a combination of liquid nail and screws. 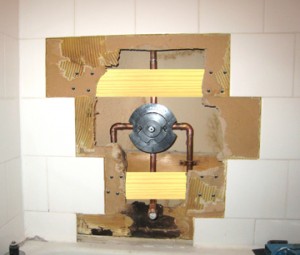 Step 2: Patch hole
I’ll fill the hole with (hopefully) one continuous piece of greenboard, screwed in place with mesh tape over the joints. 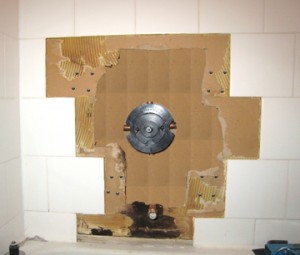 Step 3: Re-Tile
The last step will be to replace the missing shower tiles. Of course that means tiling, grouting, sealing, and caulking. I’ve already been over to Big Orange and found the same 6″ x 6″, bright white tiles. Finding matching tiles was my biggest concern. The caulk and grout will be easy to find. 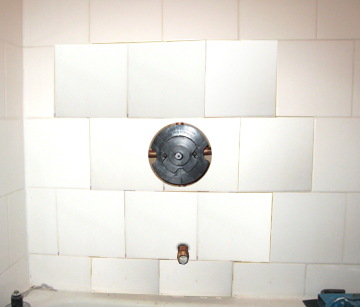 I’m not sure when I’ll begin this project but that’s my plan. Any readers have a better solution?

What do you think? Will my plan work?