Reader Question: What is the difference between plywood and oriented strand board (OSB)?  What are the appropriate uses for each? Is one better than the other for new home construction? — John

John, those are great questions.  Here’s the basic rundown on each material and suitable applications.

Plywood is made by cutting thin layers of a tree all the way around its circumference.  These boards are then laminated together using a hot press (basically a giant iron that fuses wood and glue together under heat). The first piece of wood is placed so that it rolls “up” while each subsequent layer is laid 90 degrees to the one below it, and upside-down. The result is that the tendency for the boards to warp into their original shape is diminished as each board is pressed against the other layers. As a result, thicker plywood (say, 5/8″ and above, which is made from 5 or more plies) is much less likely to warp than thinner plywood, such as 1/4″ or 3/8″. 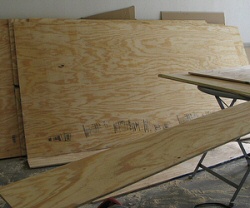 All plywood will still have some warp, especially because some layers have greater warp tendency than others (for instance, layers derived closer to the center of the tree).  Obviously, these forces are easily overcome by fasteners when the plywood is attached to studs or joists.

When exposed to water, over time plywood will delaminate.  It is important to avoid an extensive amount of water exposure during construction.  (Some water, however, will not damage the boards). We’ve had a number of readers ask about water exposure. The reality is that water and plywood don’t mix well, especially over time. If you leave plywood exposed to water, it will eventually rot and must be replaced.

Plywood is sold in nominal thicknesses, such as 3/4″. However, finished plywood is actually 1/32″ thinner than its nominal rating. For example, 3/4″ plywood is actually 23/32″ thick. The nominal length of plywood is true to its actual length (4′ x 8′ sheets are usually 4′ x 8′); however, even length and width can vary slightly due to imprecise cutting.

OSB is built by pressing smallers strands of wood together with glue and wax in a hot press.  OSB looks a lot like a collage of different wood chips. Unlike it’s plywood counterpart, OSB lacks the forces that tend the wood to warp, and so is easier to get perfect dimensions and avoid warping tendencies. 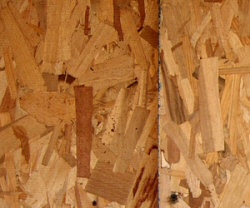 The one major disadvantage of OSB is its propensity to expand with moisture.  The edges of OSB will dramatically expand (>15%) when wet, and takes much longer to return to normal size.  If the moisture is allowed to remain in the OSB for some time, the boards may never return to their original dimensions.  The effects of water on OSB are much worse than plywood, although in both cases water and moisture should be avoided.

Applications for Plywood vs. OSB

When used as a subfloor, either product will work for many flooring surfaces, especially carpet where there will be no noticeable difference. For hardwoods, plywood is desirable because it holds nails slightly better than OSB.  Also, since the entire floor will be built with the same product, some care should be taken in deciding whether its worth it to risk potential moisture in bathrooms and kitchens that could cause OSB sub- flooring to buckle and rise at the joints.  For ceramic and stone tiles, either can be used as long as the product meets the deflection requirements of the installation.

Here’s an article using plywood and shingles to level a subfloor that may be of interest.

For roofs, plywood is preferable and required by code in many states.  Since roofing wood will be exposure to moisture, OSB will have a tendency to expand and warp which will both weaken the roof and may pry up the shingles, making any leak problem worse. However, for exterior buildings, such as sheds, OSB is an appropriate product.

Here’s an example of building a shed that uses OSB and Advantech, a material mentioned in the comments section below.

For wall sheating, OSB or plywood is acceptable, but again, plywood is preferable unless extreme cost savings is a concern.

Cost Savings for OSB vs. Plywood

The cost savings of OSB over plywood will be less than 2% of the total cost of most homes.  If we were building a new home, we’d choose plywood given only these two choices.  That said, Plywood and OSB aren’t your only options.  Our buddy Todd over at Home Construction Improvement swears by Advantech Sheathing, a next-generation surface that resists moisture much better than either plywood or OSB.  He built his whole house with it!