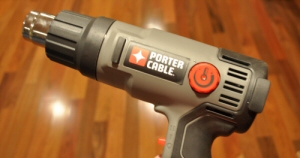 But even simple tools require a solid design and consistent manufacturing, and that’s what Porter Cable delivers in their latest PC1500HG Heat Gun (official site). Porter Cable shipped us a version of this tool for review. We gave it a test spin and like what we see.

The Lows: Hard to set an exact temperature, or to know what temperature the gun is set at.

The Verdict: A no-frills, get-the-job-done tool from Porter Cable. Just the way we like it.

Heating Performance: The PC1500HG heats up very quickly, reaching maximum heat in about 30 seconds. With more than 1500 watts of heating power, Porter Cable claims the gun reaches more than 1000 degrees F. Unfortunately, we don’t have test equipment that measures north of 540 degrees F available, but we think 1000 degrees is a reasonable expectation for the temperature at the front of the gun. The gun features a variable temperature control that allows the full range of temperatures to be set.

At the highest temperatures, the operator must be very careful not to accidentally ignite materials behind walls, or other nearby flammable materials. The heat gun is plenty hot enough to get a piece of paper to burst into flames. The manual includes good tips on getting started with a paint stripping project and the right technique. We plan to run a follow-up article reviewing a good technique for removing paint.

Heat Direction Tools: The gun normally ships with four attachments: a fan nozzle (for wider distribution on large surfaces, like doors); a glass protector (for working near glass); a cone nozzle (for precise heating); and, a spool reflector (evenly dispenses air around the whole object, for plumbing or electrical work). Our test unit did not ship with these attachments, so we weren’t able to test them.

Ergonomics: The PC1500HG grip is just right and the balance on the tool is good. It’s easy to sit the tool on a work surface without the hot metal tip contacting the surface, which is good design.

We like the PC1500HG and are anxious to use it on a more extensive project.

If you’re in the market for a Christmas gift for a do-it-yourselfer in your life, this might be one tool that person doesn’t already own!

Except to pay between $60-$80 for the Porter Cable PC1500HG Heat Gun. The tool  is available at many local retailers.