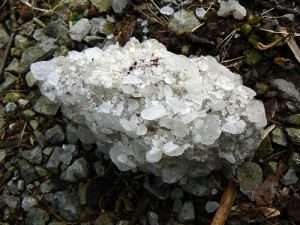 Well, Winter is around the corner and it’s time to get ready. But you might want to leave the rock salt behind.

Rock salt, also called Halite, is a form of sodium chloride. Halite is most commonly used to help manage ice. People spread it on roads, walkways, and driveways. The rock salt has a lower freezing point causing the ice to melt. Even a small amount will be effective.

So what options are around to avoid rock salt?

What do you think? What do you use to melt ice?
Image courtesy of Benimoto