About a month ago, I did a circ saw blade comparison, and it caused a little bit of a stir. DeWalt immediately arranged for a phone call to discuss their latest modifications and Bosch eagerly jumped into the ring with their Daredevil blade. Now that I’ve covered myself in sawdust twice, here’s how things stack up. 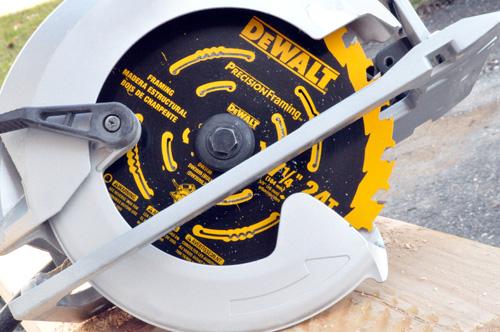 On my phone call with DeWalt they walked me through several features that they think makes their blade the best available. We talked about tooth geometry, proprietary carbide, vibration dampening resin, and more. Out of all the new changes, DeWalt is most excited about the new plate design.

When you cut with a circular saw, the friction creates a lot of heat and the blade actually expands. This can cause the blade to become warped. To counteract this, manufacturers often include expansion slots to dissipate the heat. Some manufacturers even work to raise the melting point of the metal so the blade remains flat and cuts true. If you’ve ever used a saw and feel like the blade is wobbling, odds are the blade has become warped. DeWalt is so energized because they boast their plate design can handle the heat better than anyone else resulting in a better feel of cut for the user.

DeWalt shared another interesting piece of information during our phone call. They revealed that the initial manufacturer sample lot (MSL) showed problems with the resin. I noted in my first comparison that the resin didn’t last long, and that’s because I reviewed a blade from the MSL. The resin on new blades is expected to last around a 100 cuts. 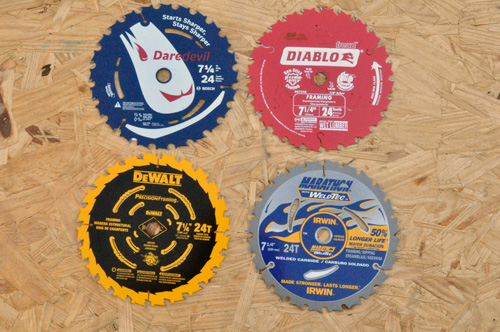 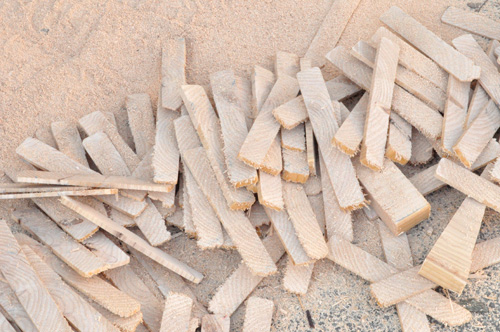 What does DeWalt mean when they their blade provides a better feel of cut? They’re basically saying that it takes less force to go through a material. Since that’s where DeWalt hangs their hat, that’s where I focused this second round of blade comparisons.

I grabbed a Marathon Weldtec (Irwin’s newest blade), a Freud Diablo, Bosch’s Daredevil and DeWalt’s new framing blade. Each is a 7-1/4″, 24T blade and I started cross cutting a 2 x 10. All together I estimate cutting about 25′ with each blade. Once I was finished, I was covered in sawdust, had a huge mess to clean up, and knew that the DeWalt outperformed the competition for the best feel of cut. I have no problem bashing DeWalt’s blade so you should know that I’m not BS’ing here. There really was a noticeable difference. Second place was a close tie between Bosch and Freud while Irwin brought up the rear.

Again, this second round of testing only measured feel of cut, however there are lots of characteristic to consider when purchasing a blade like staying sharp, longer life, clean cuts, and price tag. There was a brief discussion about re-sharpening carbide tips in the other blade comparison. It’s a valid point, but no one I’ve spoken to has actually ever taken the time.

A few weeks ago, Pop Sci compared the same Bosch and DeWalt circ saw blades to see which one could go longer. Their test involved asphalt shingle sandwiches. Check out their top pick here.