Late last month, Troy Bilt reached out to us and offered a sample unit of their new Troy Bilt FLEX Yard Care All-in-One System for our review. The concept behind the FLEX system is straightforward: use one engine system to power a number of large yard tool attachments (e.g., lawnmower, pressure washer, snowblower)  instead of owning each of these tools as standalone machines. The FLEX’s value proposition is two-fold: (1) save space and reduce clutter in your garage or shed by storing attachments (which are mostly smaller than standalone models); and (2) maintain only one engine, instead of two, three, or four, each of which may take a different types of fuel, have differing maintenance instructions, etc. Since the FLEX can be used year-round with tools for all four seasons, you can also avoid the steps required to prep an engine for long term storage as you would for a standalone lawnmower or snowblower each of which is used for half a year or less in most climates.

Troy Bilt let us pick two FLEX attachments for review. Since we already own a working lawnmower and were in need of a new pressure washer and snowblower, we selected those two. Because it’s still summer in Baltimore, this review focuses on the 3,000 PSI Max / 2.5 GPM Pressure Washer. Here’s two pictures of the unit–the first with the pressure washer attachment separated, and the second with the system hitched up and ready to go. 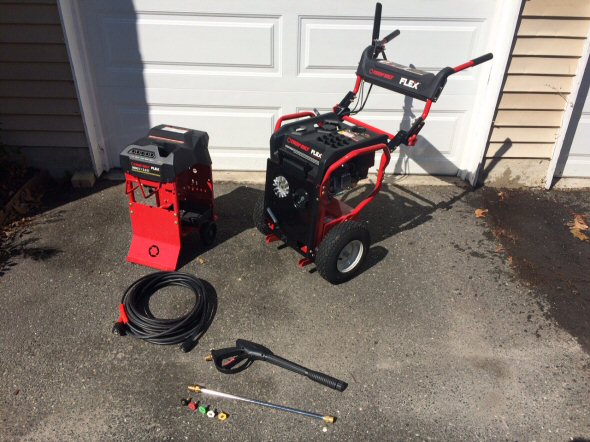 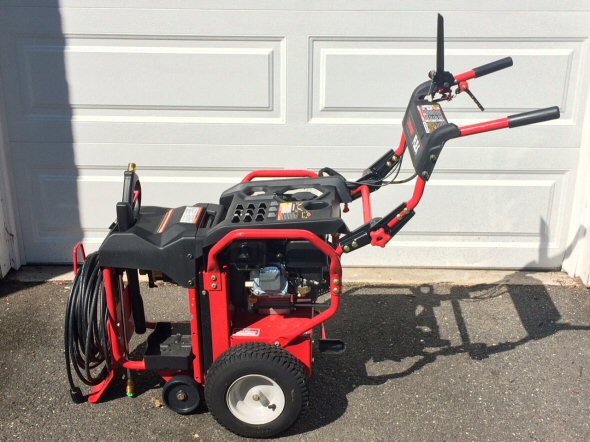 What Other Attachments Are Available with the FLEX?

Troy Bilt said they are working on developing additional attachments. We could easily see the usefulness of chipper/shredder similar to this standalone model.

The first thing we noticed right off the truck is that the Troy Bilt is solid–very solid. The frame is a thick gauge steel, the components look and feel sturdy, and nothing about it comes across as cheap. And it shouldn’t… as you’ll see below, this all-in-one comes with a sizable price tag, so we expected it to have a premium feel, and it does. It’s also pretty heavy–especially when an attachment is connected. But, because the attachments separate and can be lifted independently, two people can lift the FLEX and its components into the back of a pick-up truck without too much trouble. I view this as a pretty great feature. Having lifted a two-stage snowblower onto the truck with a friend, I can attest that the ability to divide the weight in half is great.

Setting up the FLEX

Setup was simple and straightforward, and the instructions were easy to follow. Setup consisted of removing some components used to secure items during shipping, adding oil, and adding gas. Probably the most important thing we ran into with the FLEX is that you should not start the engine with the pressure washer attached and water not attached and pre-bled through the lines. This can damage the pressure washer’s compressor. Easy enough to follow.

The FLEX is easy to start and by following instructions, we were able to start the engine on the first pull. (We had hoped to see an electric starter for the winter… The engine has a switch for starting when it’s colder than 32 degrees outside, so we’ll see how it performs this winter when it’s cold and engines typically have a harder time starting… It may in fact be fine.) 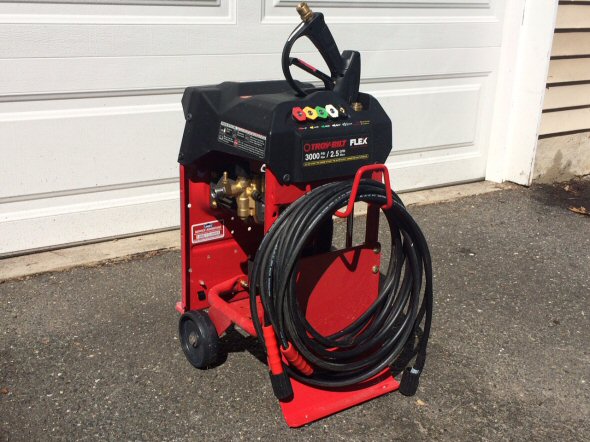 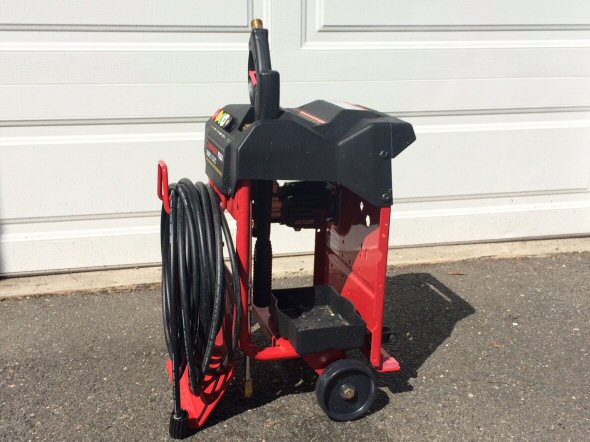 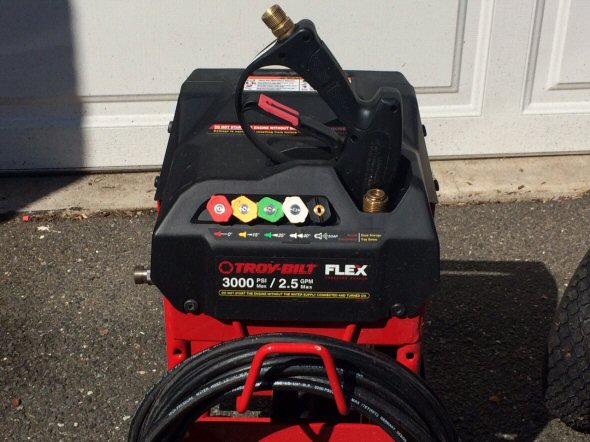 We used the washer on three surfaces: a brick front porch, siding, and an old concrete sidewalk. The washer performed great – and because it’s 3,000 PSI, we were able to use wider nozzles to make the jobs easy. Here’s a few pictures of the work and the results. The results on the brick were particularly dramatic as this stoop hadn’t been cleaned for a decade. 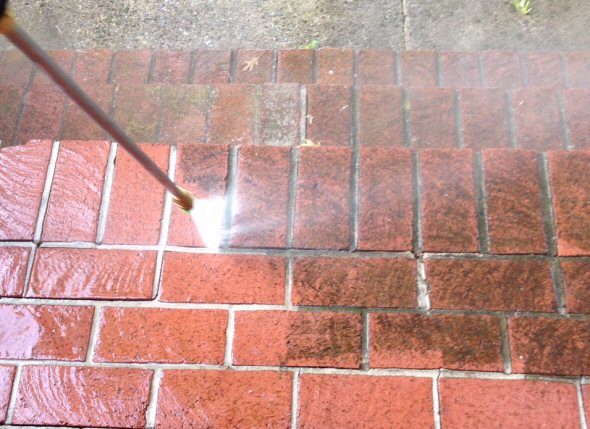 We were able to stand pretty far back from the siding, which is nice because it reduces splash. (And yes, that siding was melted by a “grilling incident” a few years back) 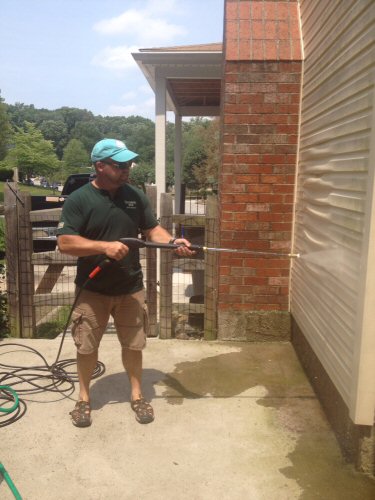 Here’s a top-down look at the sidewalk in front of our place. The pressure washer took out all the mildew and dirt for a much newer look. 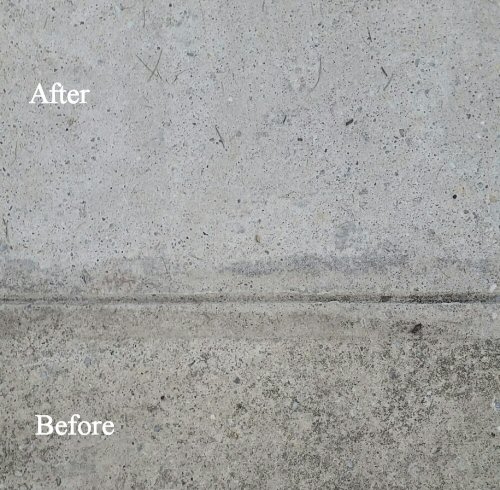 The FLEX system is priced such that if you are committed to the concept and buy at least three of the attachments, you’ll save a little over buying comparable equipment separately. Obviously, buying the base system and only one attachment will be much more expensive than buying a comparable standalone tool, but that would defeat the purpose of the FLEX system.

(All prices and links are to Lowes.com)

Who is the FLEX Right For?