Video: How to Wire a Half-Switched Outlet

In this example, the power comes from the breaker panel, then to the switch box, and then on to the outlet. After the video and a few pictures, I explain an alternative method that can be used to achieve a half switched outlet when power comes to the outlet first.

If the video moved too quickly, these pictures should make the wiring setup clear. 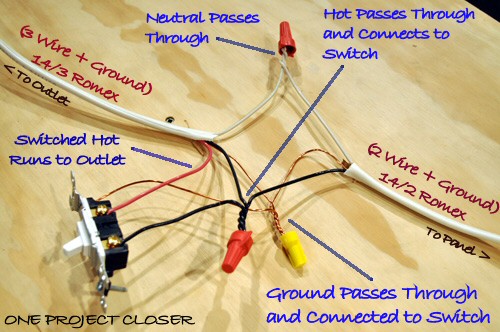 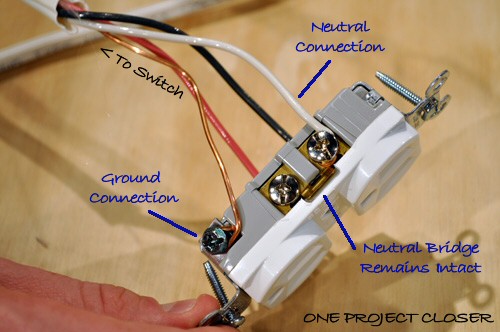 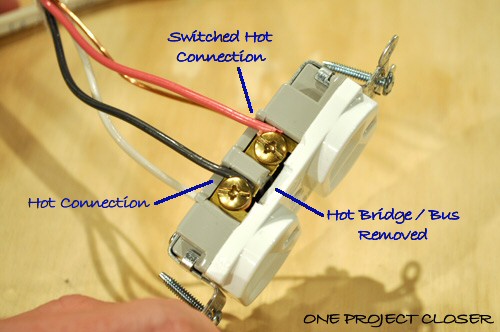 In the approach in the video, power enters first at the switch. If power enters first at the outlet, it is possible to achieve a half-switched outlet by branching a switch wire. This is achieved by running two-wire cable from the outlet box to the switch box. Power leaves the outlet box on the white wire (which should be wrapped with black or red electrical tape to indicate that it is being used to carry “hot” to the switch”), then in the switch box the black and white wires are connected to the switch, effectively making the black wire “switched hot”, which runs back in the same cable to the outlet. Using some pigtails, you can attach both hot and switched hot to the top and bottom of the outlet.

Dave Rongey has a decent set of wiring diagrams for both methods of half-switched wiring. (There are a number of ads on this page… but I did think Dave’s drawings were a very good look at both wiring methods.) Note that recent changes in the National Electrical Code require a neutral wire be present in all switch boxes, which means the alternate method (where power enters into the outlet rather than the switch) is no longer acceptable, unless three-wire cable is run from the outlet to the switch, which provides no cost savings, and so isn’t a great solution.