Why is One Side of an Outlet/Plug Larger than the Other? 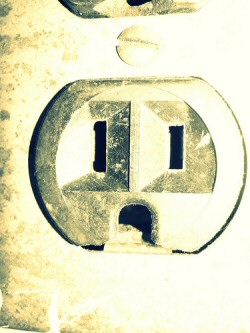 You’ve probably noticed that in all homes built since the early 80s, the standard configuration for a receptacle is a large slot on the left, a smaller slot on the right, and a roughly circular hole in the middle underneath the two of them.

You probably know that the center hole at the bottom is the ground wire, but probably don’t know why one slot is larger than the other, or how grounding works exactly.

Remember that in order for an electrical appliance to run, a complete circuit must exist through the appliance.  This means a switch could be placed anywhere in the circuit and still prevent the appliance from running.  For example, on a toaster, the switch could be placed either before or after the heating wires in the circuit and it would be equally effective.  However, it would not be equally safe.

Let’s say that we have a toaster with a switch installed after the heating wires.  A piece of bread gets stuck in the toaster and you (unwisely) start rooting around inside of it with a metal fork.  Since those wires are electrified (they are connected to the hot wire), as soon as you provide an alternate path for the electrical current to exit–e.g., through the fork, through your body, out your feet to the ground–you get shocked.

Take the same toaster and put the switch before those heating wires.  Now, when you go rooting with a form, the wires aren’t electrified at all, and you won’t get shocked.

If it isn’t obvious already, the reason one side of a plug is larger than the other (a.k.a. polarized) is to make sure that the switch inside a device is always in the circuit before the motor or heating wires or other electrical parts.  This is a safety mechanism just in case you accidentally provide an alternate exit path for the current.

Now you know about polarization.  Stay tuned for how grounding works and why we need it.