We’re kicking off this week with our next Pro-Follow!

But before I get started with all the details of Day 1, I wanted to let you know that Steve Wartman and his crew are continuing to work on the deck build we covered last week. We’ve had some difficult weather for exterior remodeling over the last few days, so Steve’s crew is focusing on several indoor projects at that home. Next up on the deck project is the installation of Trex trim and the railing system. As those sub-projects unfold, I’ll be bringing you the usual day-by-day coverage. Look for the next deck update in a few days, with the final How To Build a Deck article likely to run next week.

(You can see all of our in-progress pro-follows, including the deck project, right here).

And now, let me introduce you to a new, exciting Pro-Follow series: A Complete Basement Remodel. If you’ve been with us since last November, you’ll remember Joe Bianco, President of SDG Home Solutions, from our guide to build a concrete patio. I’m back with Joe as he starts work finishing a large, completely unfinished basement. Here’s Joe with a few details about this project. (Note: this video was shot at the beginning of Day 2, but we’re covering Day 1 below… so some of what Joe says you won’t know about yet).

Video Recap: Joe shares that his crew is well underway with the basement remodel. The framers have already finished, and right now the plumber is roughing-in the bathroom. This basement will have a large entertaining area, a bedroom, multiple closets, and a small wet-bar.

Here’s a diagram showing how the basement will be laid out. In the upper left there’s a small closet for the electrical panel and telco system (telephone, data, alarm). Moving counter-clockwise, there’s an entertainment area, followed by a bedroom with a large window. On the lower right, the HVAC closet is an unfinished space where the sump-pump and furnace are already located. The original builder provided rough-in plumbing for a half-bath, and to add the shower and wet-bar will require a bit of additional plumbing that I’ll be covering in Day 2. In the upper-right, you’ll notice an existing elevator and a doorway leading to another unfinished area. 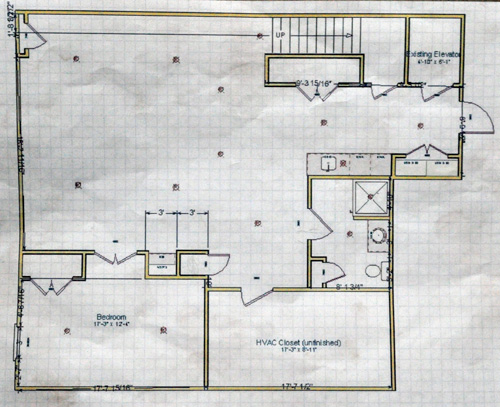 Pro-tip: For inspection purposes, it’s important to designate spaces in drawings appropriately. For instance, the bedroom is allowed to be labeled a bedroom because it features a large window which can serve as an emergency exit (or “egress”), a code requirement in most areas. The “closet” with the electrical panel is not labeled as a closet because the expectation is that nothing will be stored in that space, as that would constitute a fire hazard.

Step 1: Framing the Walls and Bulkheads

Before the framers arrived, Joe marked the concrete slab with a chalk line to identify the location of all walls and door openings. During this step, it’s important that lines are accurate, because the framers won’t be checking if corners are square or walls are parallel. They simply follow the guides marked on the floor. Joe checks and double checks these lines before the framers arrive. 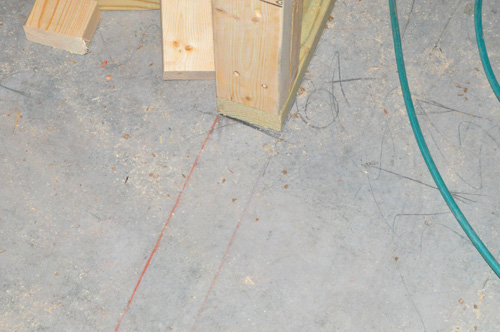 I was really impressed with the framers. Four guys framed out this entire basement in about five hours. For a typical do-it-yourselfer, framing can be a multiple-day/multiple-week activity. The speed and efficiency with which these guys worked was impressive.

The crew built all the walls on the ground before standing them up. All the bottom plates are pressure-treated lumber to properly handle wicking moisture from the concrete slab. All studs are 16″ on center (oc). Placing studs 16 oc ensures that drywall joints will occur in the middle of a stud. 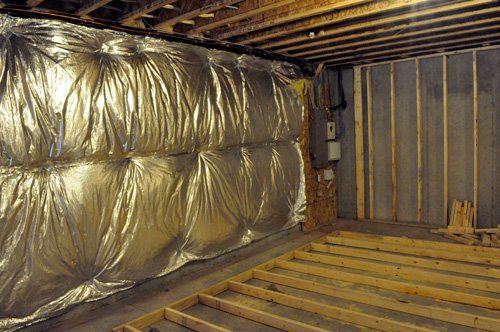 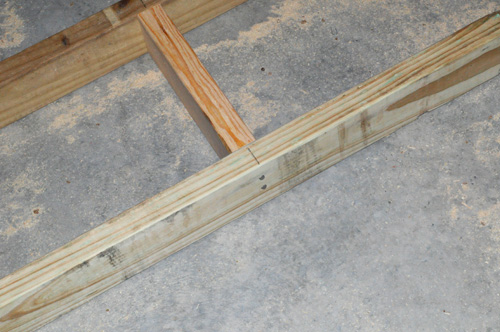 The crew drove cut nails to fasten the walls to the concrete floor. 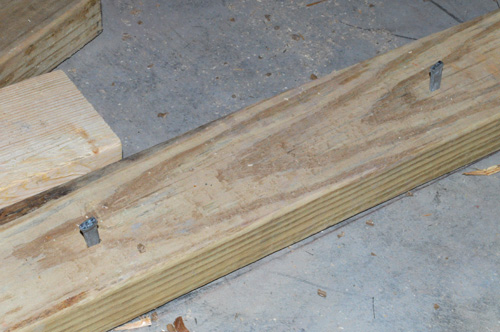 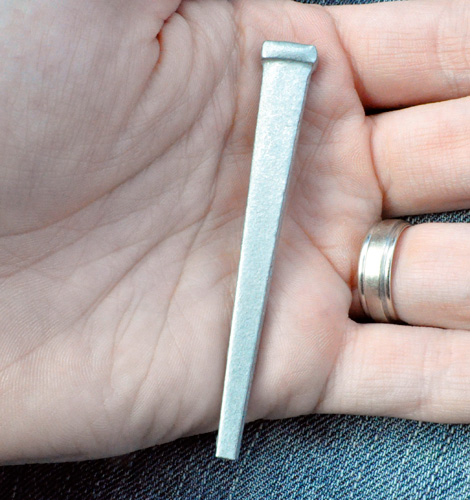 Pro-Tip: Powder actuated nailers are great tools for driving fasteners into concrete, especially when there isn’t room to swing a hammer. You can find powder-actuated nailers at your local home improvement store. Here’s a more thorough explanation of powder nailers. 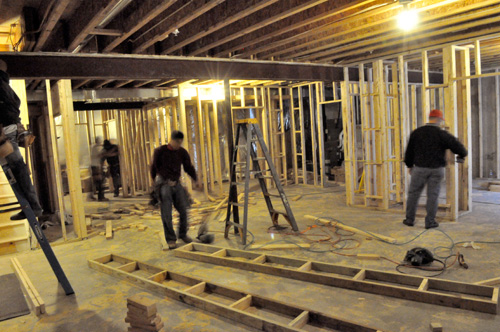 None of the walls in this basement will be load bearing, which eliminates any concern for building structural headers over doors or the lone window in the space. 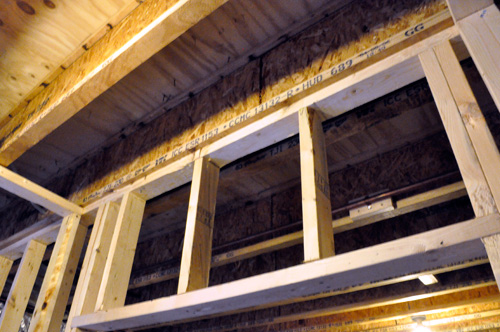 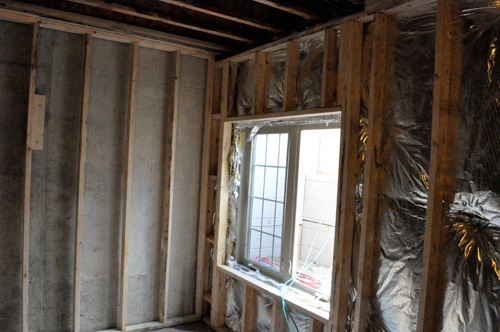 Pro-Talk: If you followed our shed-build series, you know that the short 2×4’s above and below windows and doors are called “cripple studs”, and the 2×4’s supporting the horizontal cross-member are called “jack studs”. All of the full length 2×4’s are called “king studs” or “common studs”.

The crew also built several bulkheads (also called soffits) to conceal duct work and other utilities. Pictured below is a small bulkhead they built around freon lines that travel between the indoor air handler and exterior HVAC unit. 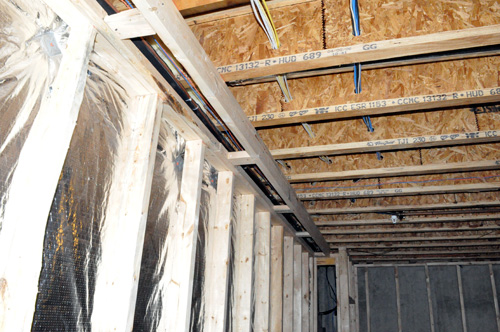 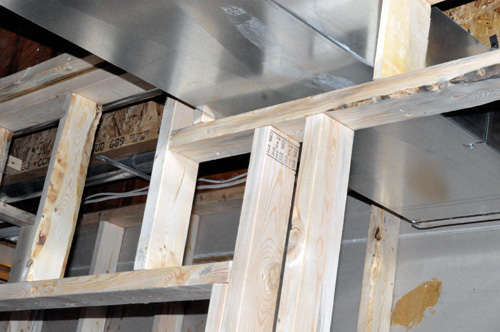 An important part of framing a room is providing a nailing surface for drywall, especially at each edge. That’s why you’ll see boards like the one in between the two joists pictured below. 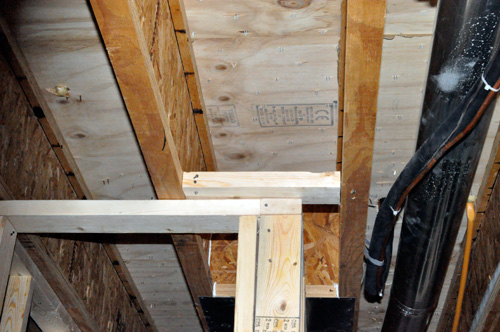 Pro-Talk: In framing, the term “nailer” is used to describe a board that provides an exposed edge. These are commonly seen on inside corners where drywall can be fastened.

There are a couple of other things the framers did that I found interesting. If you look at the picture below, you’ll see horizontal 2×4’s at the intersection of an adjacent wall. 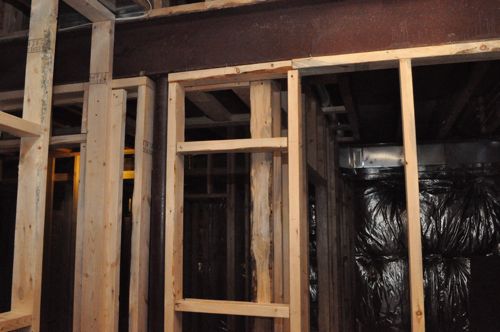 When I asked why they did that, they said it’s more efficient, because it uses fewer studs. They use the horizontal boards to make the adjacent wall flush instead of stacking 2×4’s (long-wise) next to each other.

Another trick they use is to turn the last stud on an inside corner perpendicular to the rest, as shown below. Again, this saves them from having to use a second 2×4 in the corner as a nailer. 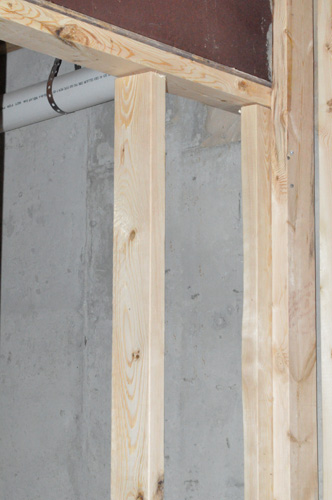 Here’s the basement framed out after they cleaned up. You can see in the picture immediately below that a major bulkhead was built around the HVAC equipment. The sides of that bulkhead were built on the ground and then lifted and screwed to the joists above. The boards that connect the two sides together are actually arranged horizontally, rather than vertically, to maximize clearance. These horizontal members are toe-nailed into the edge of the bottom board on the sides. 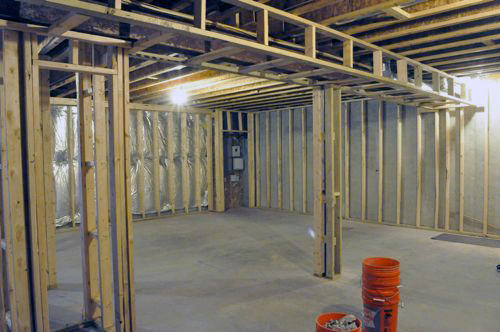 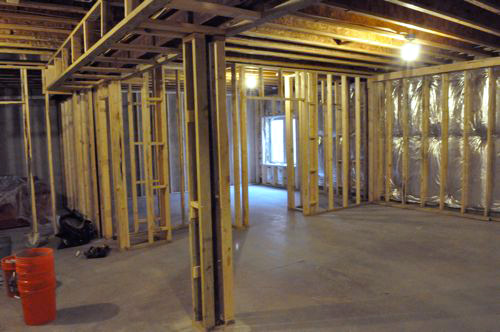 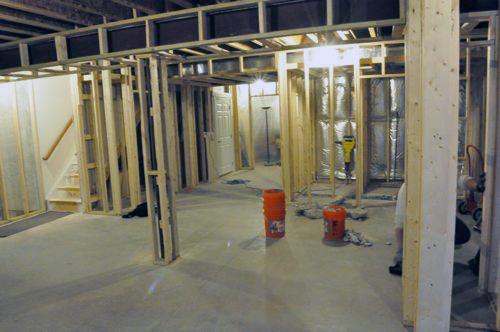 As you might have guessed, the next step will be plumbing the bathroom and wet bar. This is an interesting process because they’ll need to jack-hammer the concrete floor to move a drain.

Stay current with all of our Pro-Follow series by subscribing via email or RSS!