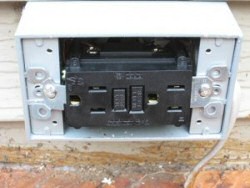 Over the last two weeks we’ve told you how polarized outlets and grounded electrical circuits increase the safety of the electrical systems in our homes.  This week we’re going to focus on a third electrical safety enhancement we enjoy: the ground fault circuit interrupt, or GFCI.

You’ll recall from both of the previous articles in our series that in the normal operation of electric devices, electricity flows from the hot side of the outlet, through the appliance, and back out the neutral (common) side.  In this scenario, the amount of current flowing over the hot and neutral sides of the circuit are equal.  GFCI protection takes advantage of this normal operating situation and uses precision circuits to measure the current flowing in and out of the appliance. If at any time the current measurements on either side of the circuit are mismatched, the GFCI trips and the flow of electricity is (nearly) instantly shut off.

You may be asking, so why are GFCIs required when we already have breakers? That’s a good question because the devices appear to function similarly. Breakers and fuses are designed to cut off a circuit only when an over-current state is reached.  A standard 15 or 20 amp breaker trips only when the current rises over 15 or 20 amps.  The goal is to prevent the wiring in your house from overheating and causing a fire when you plug in too many devices.  GFCIs trip as soon as the current in does not equal the current out.

Consider this scenario: Let’s say you short circuit an appliance that has no GFCI protection.  The current running through your body reaches 15 amps on a 20 amp circuit.  The breaker in the box isn’t going to flip and you are going to get a very serious shock until you let go of the source.  If instead this circuit were protected with a GFCI, as soon as you shorted the circuit, the GFCI would trip, leaving you with a much less serious shock.  GFCIs trip within thousandths of a second, virtually eliminating current flowing across a short.

It’s worth noting that GFCIs work only when you create a short circuit (or path to ground).  If you complete the circuit and the electricity flows through your body (or hand, or foot) back to the neutral wire, the GFCI won’t help you.  Only when an over-current situation is reached will the breaker trip.  This is a very unusual scenario, however, because the odds of you perfectly bridging the circuit a relatively small.

Almost everyone has seen the typical GFCI receptacle somewhere in their home.  It’s important to note that on a single electrical circuit only one GFCI outlet is required to protect the whole circuit. This outlet must be installed first in the line of circuits. It will have line and load terminals. The line terminals connect to the breaker or fuse box, and load terminals go to the branches further down the line. This way, the GFCI can measure current in and current out across the entire remainder of the circuit.

An alternative to a receptacle-based GFCI is a breaker-based GFCI. In this scenario, the GFCI circuitry is built right into the breaker. These breakers are more expensive, and since GFCI circuitry can go bad over time, they are fairly uncommon for 15 and 20 amp circuits. Replacing a failed GFCI receptacle requires that you turn off the associated breaker.  Replacing a breaker, on the other hand, will require you to open the electrical panel and kill the main for the house (if you are going to do it safely!)

Because GFCI circuits can fail, they should be tested at least monthly (using the “test” button on the receptacle or the breaker).  When the GFCI circuitry goes bad it no longer adds the additional protection.  Consider adding it to your family calendar on a monthly (or at least quarterly) basis to help you remember to check it.

Here’s our instructions for installing and testing a GFCI. It’s very simple and the cost is around $15.00 for the receptacle.