How to Repair an Underground Water Pipe

We’re back with our next Pro-Follow, and this one hits close to home. If you entered Fred’s Husky Tool Tote Giveaway, you probably read the brief update at the end where he shares that today’s Pro-Follow comes to you from my house.

Earlier this month, Jocie and I noticed that our water bill was significantly higher than usual.

Seeing nothing amiss in our home, we called the utility company expecting there had been a clerical error or perhaps a malfunctioning water meter. Instead, they suggested we might have an underground leak between our house and the meter, and they were right. I called a plumber I trust, and this article explains how he and his crew repaired the underground leak.

All of our Pro-Follow articles showcase professional contractors on actual job sites, and we share how they tackle home improvement projects with tips along the way. If you like learning from the pros, become an email subscriber and never miss an update.

The plumbers presented two strategies for fixing the leak. One approach would be to replace the entire length of copper pipe between my house and the meter by securing a cable at one end and pulling the old pipe and a new one (attached at the other end) through the ground. This would require minimal digging and less labor; however, copper is expensive and this solution would be too. I opted for the second approach, which was to dig down to the pipe at the leak location and replace a small section of the pipe.

Pro-Tip: On newer construction, you may see black, high-density polyethylene (HDPE) pipe in lieu of copper, because it is less expensive.

Pro-Tip: Copper water pipe has an expected lifespan of 50-60 years.

Step 1: Have All Underground Utilities Marked

Upon closer inspection of my yard, the general location of the leak was pretty obvious because of the mud, but before work could start, the plumbers needed all the underground lines located. Here in Maryland, we call Miss Utility before every dig. An Emergency Excavation Notice was filed, and within a few hours, all underground communications, gas, and power were marked. 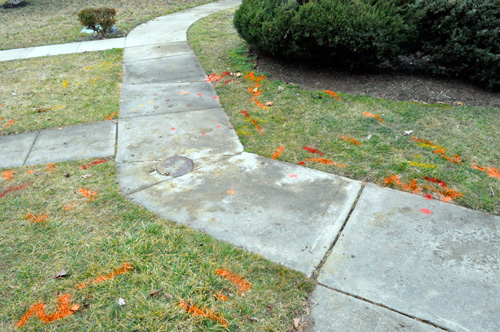 Step 2: Turn off Water at the Main on the Street

First, they needed to turn off the water supply at the meter found at the sidewalk. This picture shows the meter, which has been completely submerged by the leak. Judging by how fast the meter was moving, the leak was sizable.

[See also: How to Turn off the Water at the Street] 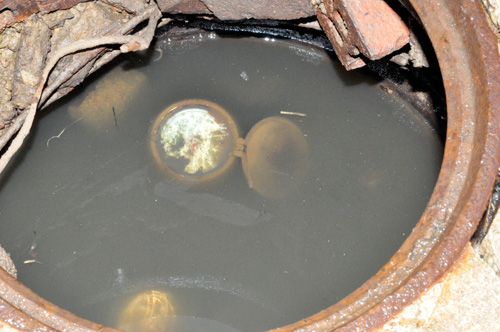 Step 3: Hand Dig Down to the Leak Location

Unfortunately, power, water and communications all enter my house at about the same point (right around the leak), which meant that they needed to dig very slowly and carefully to avoid damaging anything. 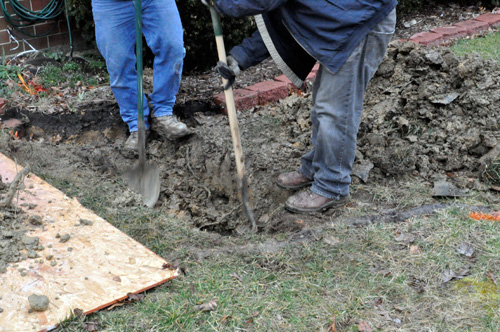 Pro-Tip: Communication lines like phone and cable service are usually found within 24″ of the surface. Water supply lines are typically buried 36-42″ deep, or deeper if you live in an extremely cold climate.

Pro-Tip: When digging, orient your shovel along the buried line (rather than across) until it has been fully exposed. You’re much less likely to inadvertently cause damage. It should go without saying: never use mechanical tools to dig near underground utilities. 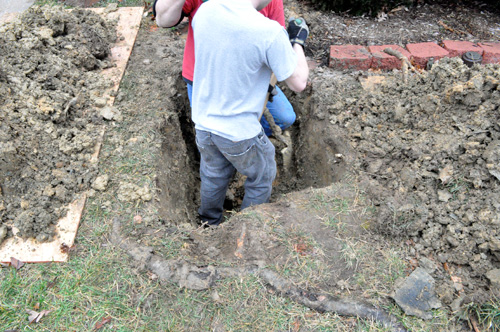 In time, they found black power lines, and they excavated around them to provide adequate clearance. 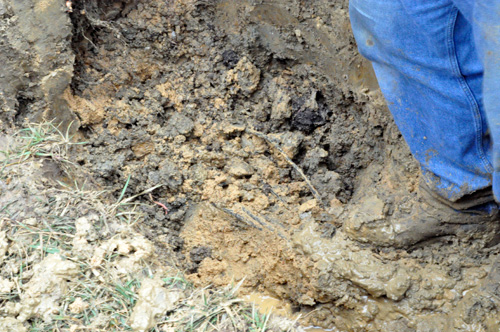 Step 4: Pinpoint the Location of the Leak

The plumbers would turn on the water supply for brief moments to help determine the location of the leak. 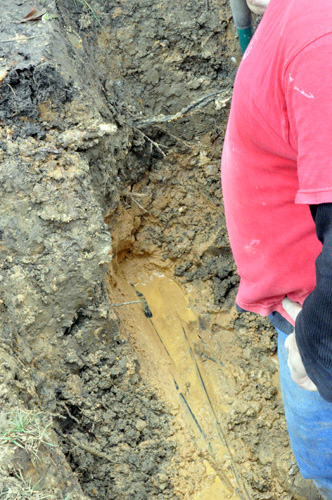 Eventually, they found the water line within a PVC sleeve. Builders would often run water supply lines through a short segment of PVC as it passed through the foundation, so it was odd that we should find the sleeve extended about 7′ away from the house. Upon turning on the water supply, it was found that the leak occurred somewhere inside this PVC sleeve.

Pro-Tip: While not the case in this home, in the late 80s builders frequently used a material called polybutylene for water piping. This material was once thought of as “the pipe of the future” because it was flexible, easy to work with, and cheap. Unfortunately, the lifespan of polybutylene turned out to be relatively short (15 years). One repair method for failed polybutylene pipe is to run copper piping through the polybutylene. If you run into a leak in an underground supply pipe that looks like PVC, and your house was in the 80s, you should be aware of this potential situation. 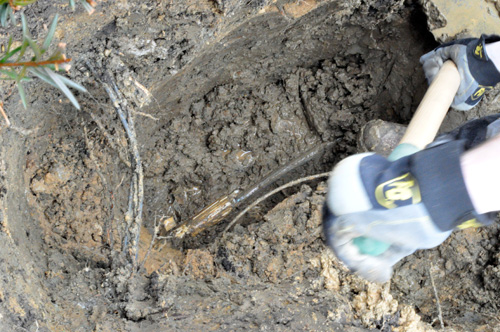 Step 5: Cut Away and Remove the Old Pipe, Install the New Pipe

This close to the house, they determined it would be best to replace an 8′ section going all the way inside. They cut the pipe just before the PVC sleeve, and we headed inside to cut and remove the old pipe. 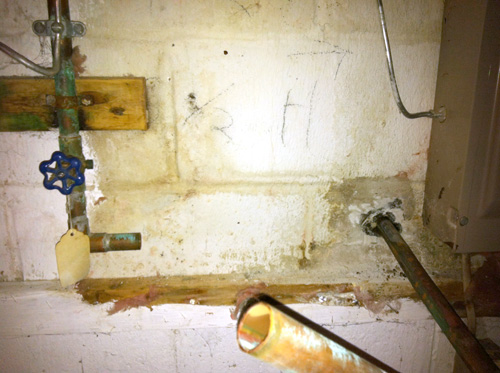 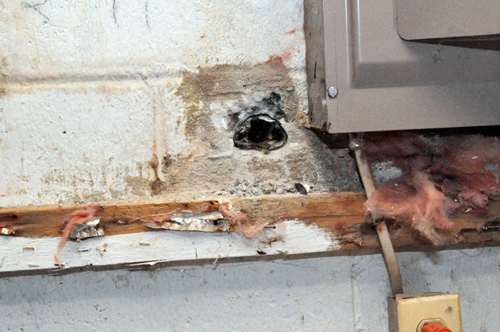 The crew attempted to push a new piece of copper pipe through the hole and PVC sleeve, but it would not go. To feed the new line, they snaked a cable through the PVC sleeve. The plan was to solder a softer, more flexible copper pipe onto the cable and pull it through (much like the alternative approach I shared at the beginning.) 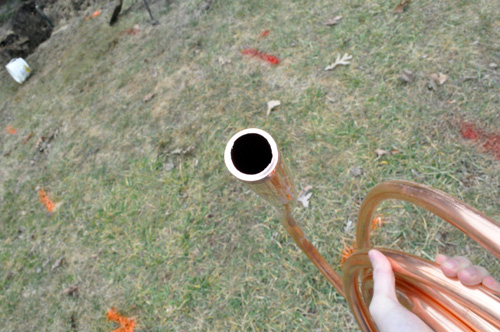 Pro-Talk: Copper pipe wall thickness is designated by letter K, L or M. Type K copper pipe is much thicker than L or M. Type L is the second thickest.

They soldered the pipe to a coupling fitted on the cable, and setup a winch outside to pull the pipe through. 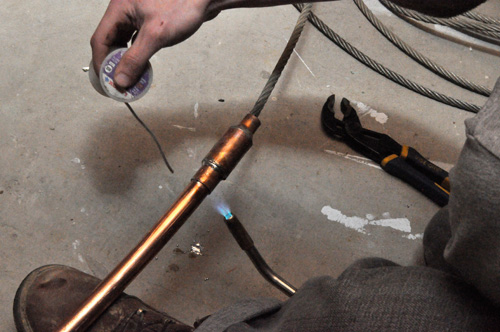 Pro-Tip: See our full tutorial to learn how to solder copper pipe. 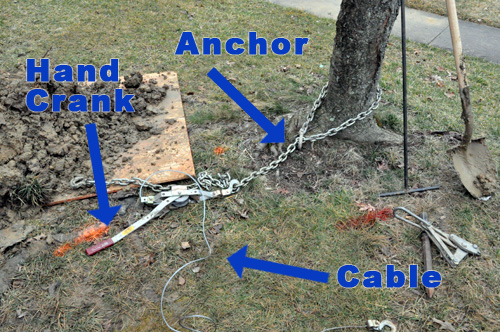 When everything was set, the crew began pulling the pipe through, and it actually dislodged the PVC sleeve. If you look closely at the picture below, you’ll see a sharp bend in the PVC. The plumbers are not sure how that occurred, but that is definitely the reason why they could not feed the replacement pipe through by hand. 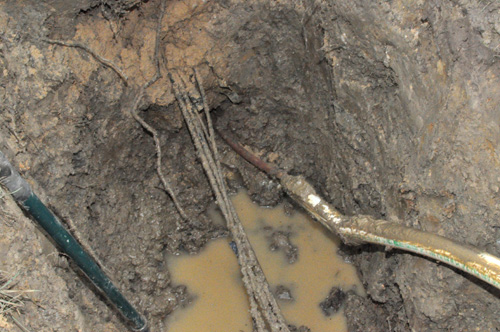 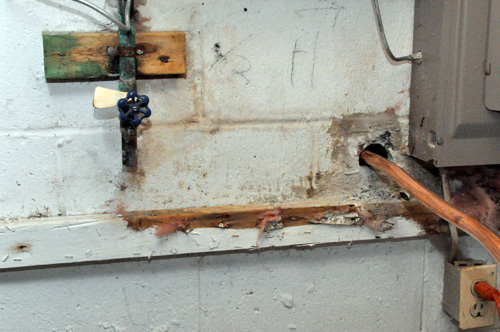 A solder joint isn’t appropriate for a buried line, so instead they used a pack-joint coupling to connect the new pipe to the existing supply line in the ground outside. Unfortunately, I don’t have a picture of this step, but you can Google for pack-joint coupling and find a good amount of information on it. Next, they turned on the water to flush out any dirt or debris.

Next, the crew went about connecting the new line inside my house, which involved simple copper soldering. If you’re curious about that fitting in the middle, it’s a compression fitting called a SharkBite. When they installed the new, 90° elbows, one of the joints wasn’t properly soldered. When they turned on the water, a small pin-hole leak was evident. Unfortunately, it’s impossible solder a pipe when it’s full of water. To address this, they cut the pipe in the middle, drained the water, re-soldered the elbow and then used a SharkBite (which doesn’t require soldering) to repair the cut. In Maryland, SharkBite fittings are fully code-compliant for indoor use. 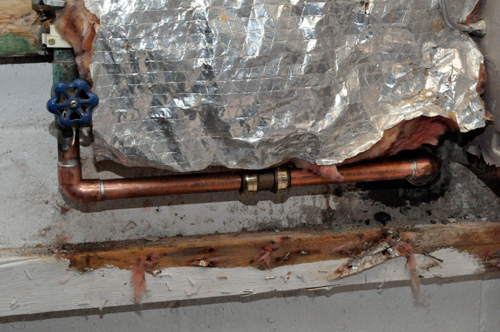 Step 7: Seal up the Pipe Entrance Points into the House to Prevent Leaks

Here’s a closeup showing where the pipe enters my house. You can see the plumbers placed a new PVC sleeve that extends a few inches beyond the foundation, and they used a clear, silicone sealant to fill the space around the copper pipe. They also used a hydraulic cement to repair the area around the PVC sleeve. 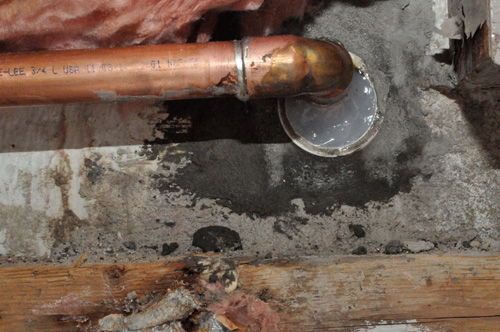 Step 8: Check and Confirm That the Pipes Are Leak-Free

The crew re-tested the line and confirmed that the pipes were leak-free.

Of course, they repaired the front lawn, and I’ll be reseeding the area in the next few days.

If you enjoyed this article, check out some of the other Pro-Follows we have going on right now.