If you’ve been following along, we’re about 3/4 of the way through the installation of radiant flooring in the basement. We’ve divided the basement into 4 roughly equal-sized areas which will each be 1 heating zone with its own thermostat.

To control the floor, we chose OJ Microline Programmable Thermostats at the recommendation of the radiant flooring vendor. These thermostats use a temperature probe embedded between the radiant wires in the substrate to detect the heat of the finished floor, allowing the thermostat to cycle on and off based on the temperature of the floor, rather than the ambient temperature in the room. 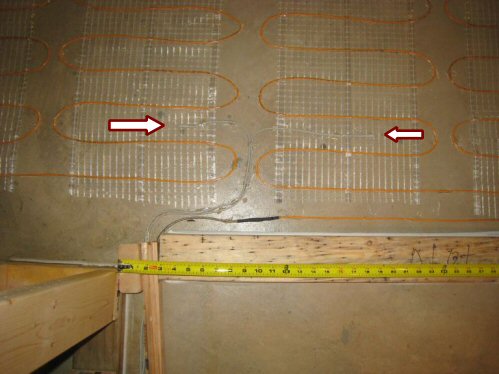 While unlikely, it is possible that a temperature probe could go bad. If that were to happen, the repair/replacement job would be extremely difficult. Our floor will eventually be built of several layers that will culminate in stone tile. Digging through the layers without damaging the flooring wires to relay a sensor would be a challenge to say the least.

As a result, we chose to install redundant backup sensors in each zone (a total of 4 extra sensors). The total cost for all 4 sensors was about $75 after shipping. Considering the total installation of the floor will cost more than $5000, and a repair could cost several hundred, we think it’s a small price to pay for added piece of mind.

We followed OJ’s instructions for testing and installing the temperature probes, which essentially involves a resistance test at room temperature to ensure the correct value is returned to the thermostat. We installed the probes in separate radiant wire loops, although they could have been installed right next to one another in the same loop. Both probes run back to the wall, through the baseboard, and up to the thermostat. Only one probe can be attached at any time; so the back-up wire will just sit in the box unless it’s needed.

What do you think? Would you install the back-up sensors?  Have you ever had to repair a bad sensor?