Editors Note: Today we’re featuring a guest contribution by Joe, one of our regular readers.

Originally, our house had landscape lighting and a sconce next to the front door, and the garage lacked any decorative lighting. I recently replaced the fixture next to the front door, and it looks much better. Unfortunately, we rarely use that door so the light isn’t used too much. We like having the landscape lights on at night (when we remember to turn them on and off) so we decided to install a timer and LED bulbs (to keep energy usage down).

I was really pleased with the timer, and I felt the garage could use some sconces flanking the garage door. Rather than install another time, I opted to use the same timer as the landscape lights.

I wont address every single aspect of the project, because they have already been covered here on OPC. I started with a new circuit coming from the sub panel in my garage. Everything related to wiring a new circuit can be found in this article Ethan wrote.

The timer I used is the Honeywell econoswitch, it automatically adjusts for sunrise and sunset times, as well as daylight savings, etc. You just input your location (in the form of latitude and longitude) and it takes care of the rest (obviously you need to set the time and your desired program). It also has a manual override. 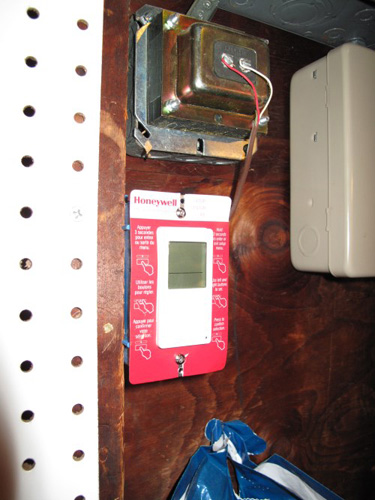 I wired this switch to an outlet, to plug in the landscape lighting transformer, and from that outlet I wired up the sconces. I had to have a direct run from the outlet to each sconce because the boxes I used are basically pancake boxes, and should really only have a single wire coming into them.

The boxes I used to mount the lights are really nice. Instead of having to modify the siding to fit the box you can just put the box OVER the siding, and (if you have normal siding) it will just match right up to it without any gap. It also has an integrated electrical box so the only penetration you need in the wall is for a single piece of wire. The boxes are made by Arlington, and have many styles for different types of siding. I chose the flat one because my siding has a very large lap (7/8″?) and very tall “boards”. The fit isn’t perfect, but its good enough.

I decided to center the sconces on the short wall on either side of the garage door, so I measured the wall for where I needed to drill for the wire based on where the knockout on the box was. If I had to do this again I would NOT have used the center knockout. I would have used one of the offsets. The center knockout put the wires right behind the mounting bar for the fixture, and put a screw right near the wire, making it more difficult to wire. 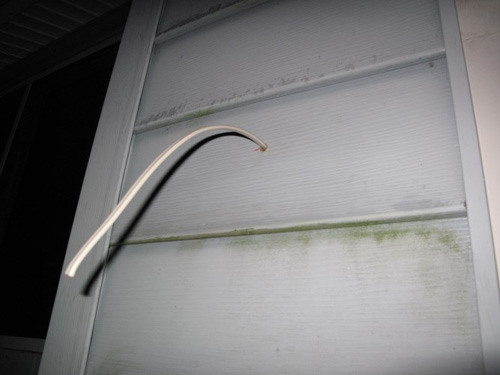 I pulled the wire through the wall and caulked around it, then I put the cable clamp in the knockout and pulled the cable into the box and mounted the box to the wall using the provided hardware. My house has plywood sheathing so I didn’t have to worry about mounting it on a stud. 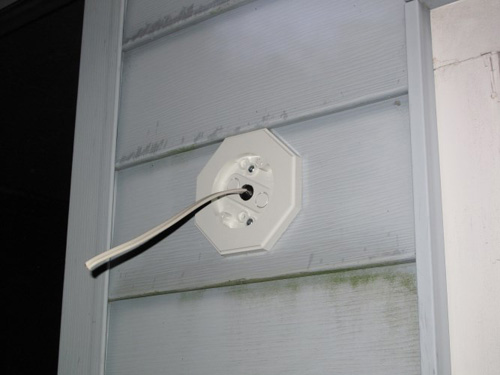 I stripped the jacket off the wire and attached the mounting bracket for the light, then I had to wire up the fixture. I found that if I temporary mounted the fixture incorrectly, I could leave the wiring exposed and make my connections without having to hold the fixture myself. 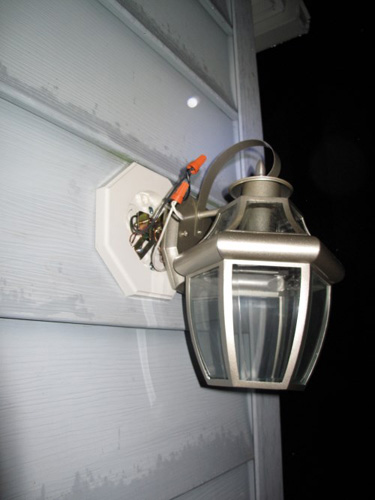 You can also see how that mounting bracket for the fixture is right over the cable coming into the box.

After making the connection I mounted the fixture properly and caulked around the top of it, leaving the bottom open to let any water out. the only thing left to do was plug in the landscape lights and put bulbs in the sconces. 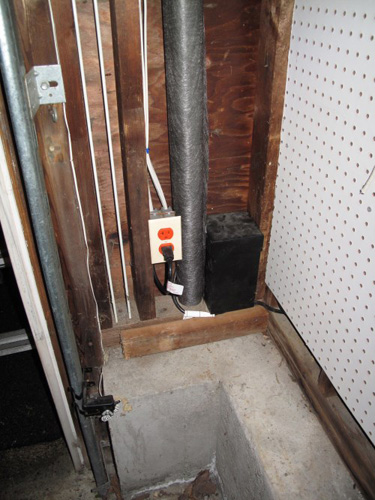 The bulbs I used are LED bulbs that actually look GOOD exposed in clear fixtures, they have a glass globe and grey base, and a plastic light diffuser in the middle of the bulb. They’re not that bright, but I only wanted them as an accent light, so its perfect (they claim to be equivalent to a 25w bulb). 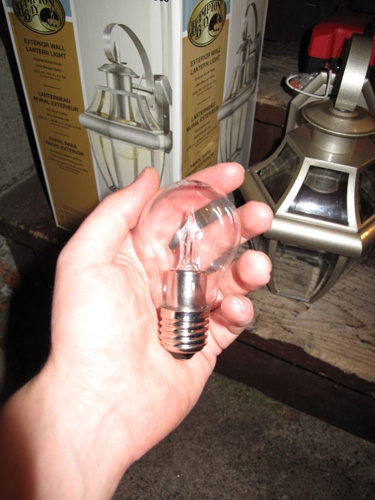 After turning everything on and programming the timer, all that I had to do was admire my work (oh, and that cleanup stuff). 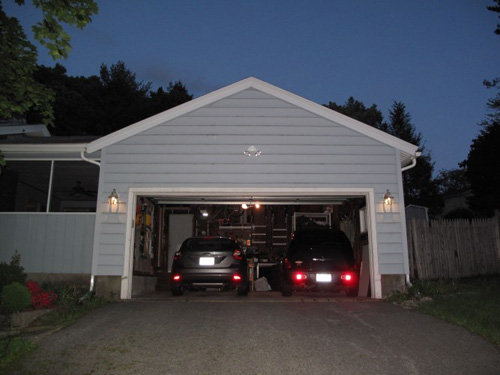