Pro-Follow Update: Before I jump into today’s article, I wanted to share that the composite deck we’ve been following has been completed, and I expect the full How to Build a Deck write-up to be published tomorrow! It should be a great guide for anyone considering building a deck or simply wanting to learn more about what to expect. I sincerely appreciate all the questions and comments you’ve written so far, as I’ll be able to incorporate those into the final article. Keep ’em coming!

The basement remodel is also making progress. The drywall has been hung, and the mudding and taping should be completed sometime this week. Look for a full Pro-Follow update on the basement early next week.

Mike is one of the carpenters that works for Steve Wartman at Wartman Home Improvements. As I shadowed Steve’s crew during the shed build, I noticed that Mike always kept a tape measure, pencil, utility knife and level close at hand. He’s used an Empire level for several years; however, it is no longer accurate and its magnets are coming loose.

To help Mike out, we reached out to one of our past partners, Johnson Level & Tool, and asked if they’d be interested in providing a replacement. They were quick to offer up this 48″ version of their “Classic” 9500 Series Magnetic Aluminum Box Levels. 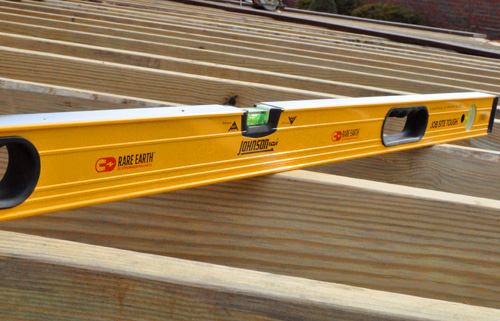 Levels are not fancy tools, but that doesn’t mean they’re unimportant. A level determines whether a wall is straight, a window is square, or a deck is properly sloped. Because of its critical role, first and foremost a level needs to be accurate and durable. Perks like rare earth magnets and anti-shock bumpers are nice, but secondary to this goal. 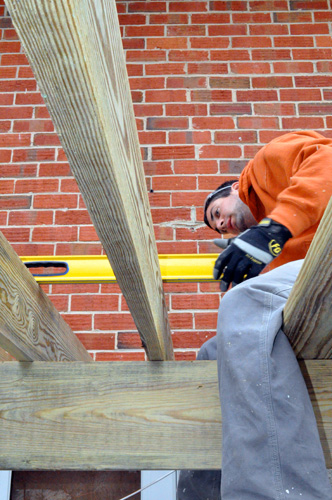 Levels are also useful as a straight-edge for marking lines. A frustration we’ve had here at OPC, and that Mike echoed, is that Empire levels have beveled edges on both sides that make it near impossible to scribe a plumb, level line with a pencil. Fortunately, Johnson levels have 90 degree edges, which makes them perfectly suited for line drawing. 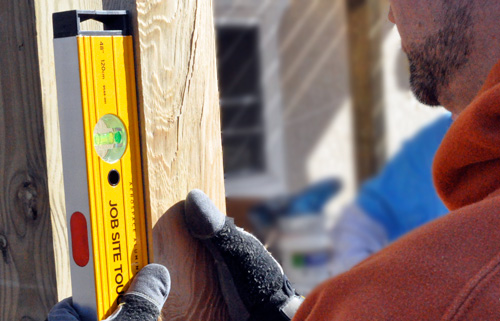 Mike used the Johnson level on the deck build project for constructing stairs, checking deck posts, and planning joist slopes. Based on his experience, he offered a few thoughts on the level.

The Johnson 9500 is accurate and straight. Mike was impressed with the rare earth magnets which delivered a powerful hold. The magnets were very convenient when he was installing the deck rail system. He also said the heavy-duty, aluminum frame feels solid, and that based on its rugged feel, he expects this level to last a long time. 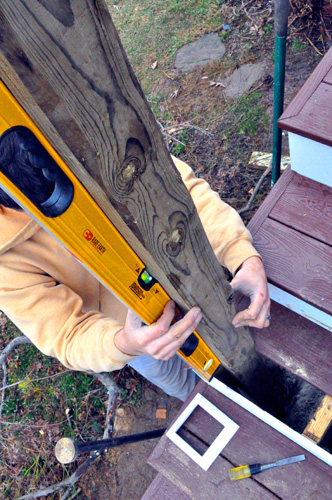 All of the levels in the 9500 series include these additional features: solid block acrylic vials that won’t fog, leak or break; precision milled edges; rubber hand grips; and, anti-shock removable end caps.

This level is available in 24″, 48″ and 78″ lengths. If you want to see more details, check out the product page link in the Related Content section below.

Pricing & Where to Buy

Johnson levels are priced competitively with other contractor-grade precision aluminum levels. They are sold at dozens of home improvement stores, including Home Depot, Menards, Sears, and more. Here’s what you can expect to pay.