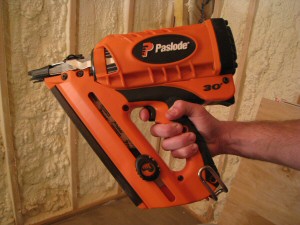 If there ever were a tool that would create envy in the hearts of contractors and DIYers alike, it’s Paslode’s new CF325 Cordless Framing Nailer.

The CF325 brings the power of a traditional round head framing nailer without the associated compressor and hoses. Instead, it uses compact fuel cells and a rechargeable battery to drive nails.

Paslode recently sent us the CF325 to review. We used the nailer in our recent remodel to attach a few extra studs to existing framing members to serve as drywall nailing surfaces.

We also tested the nailer on spare pine lumber in a few different configurations, including side-side and side-top, the most common framing configurations.

The Verdict: Paslode delivers big on the marketing hype. Love it. 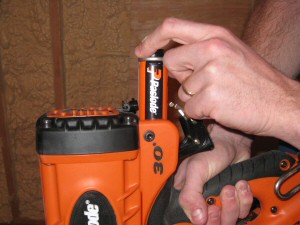 As the second generation of Paslode’s cordless framing technology, the Paslode is packed with features:

How Well Does the Paslode Framing Nailer Work?

We found the nailer had no trouble sinking 3″ x .120 (10D) nails in side-side and side-top configurations when we used two hands on the nailer and ensured some force against the board.

When firing in a side-top configuration (the most common for framing), you can actually apply much less pressure (just one hand) and the nail sinks every time. When fastening two boards side-side, you must keep pressure on the nailer to ensure the nail fully sinks.

The nailer fires very fast. In fact, we fired nail after nail into dimensional lumber with no problems. The nailer also includes a tool-less depth adjustment mechanism.

Of course, the best feature of this nailer is its portability. With no compressor and no hoses, you can tote this nailer quickly to the job site, get it up an running in seconds, and put it away quickly. You don’t have to move a compressor or have an extremely long hose to keep moving on the job. One thing we really liked about this was the ease of use on small jobs (e.g., you can fire 2-3 nails in 20 seconds with no need to haul, charge, and drain a compressor – a 20 minute commitment at minimum).

Nail, battery, and fuel cell loading are simple. We were up and running and firing nails in just 10 minutes (after allowing the battery to charge).

Overall, we are very impressed with Paslode’s CF325. If you’re in the market for a framing nailer, we think the CF325 makes an excellent choice.

Price & What Does the Paslode Kit Include?

The Paslode CF325 Cordless Framing Nailer retails for a little under $399 on Amazon (at that link). Amazon’s prices are competitive with the typical local purchase joints and you can sometimes avoid sales tax purchasing online. You can also find the kit at Home Depot, Lowes, and right on paslode.com.

The Paslode CF325 ships with:

What do you think? Got a question about the tool? Do you own the Paslode CF325? Let us know your experience in the comments.