Rebuilding Together Baltimore: One Day Makes a Big Difference

Six out of the last seven years, Fred and I have volunteered for Rebuilding Together Day – a single day in April when groups of volunteers from across the greater metropolitan area come together and improve the homes of the truly needy in a community. The event is sponsored and staffed by local and national corporations and organized by a local chapter of Rebuilding Together — in our case, Rebuilding Together Baltimore.

Rebuilding Together’s mantra is Safer, Warmer, Dryer. Since we only have one day to make a difference in these homes, it’s important to come with the right mindset, know the mission, and avoid scope creep. In many cases, the improvements we perform would be seen as sub-par to the average homeowner because they don’t place a heavy emphasis on cosmetics. 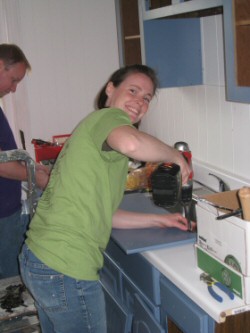 For example, this year one of the projects our house team tackled was installation of a new kitchen. We used salvaged, painted kitchen cabinets from The Loading Dock, new laminate countertops from a local home improvement store, and a mixture of salvaged and new hardware. Our budget didn’t permit replacement of the gas stove or refrigerator, both of which were well worn but still functional and adequate.

The new kitchen we installed would hardly qualify for a blog post on this site (except perhaps as a Before picture in our Before and After series). In the final kitchen, the cabinet lines aren’t always even, the drop ceiling above is still old, and the floor still has dips in it… But to look at it in this way would be to look using the wrong set of eyes.

See, the Before pictures in our kitchen makeover story were much worse than anything we normally encounter. The existing cabinets were quite literally falling apart. The drawers were sitting on top of an ancient, crumbling countertop, and the floor was severely delaminating. Food could no longer be stored or prepared safely in the kitchen. It was awful… something you might expect to see in an abandoned house.

So, for the homeowner we helped this year, our kitchen makeover was a huge improvement–a functional, safe, and dry kitchen! And, even though it wasn’t cosmetically perfect, it was 100 times better than when we started. Mission accomplished.

Our Main Rebuilding Together Project

Fred and I helped with the kitchen only at the end of the day, though. The bulk of our time was spent on the upstairs bedrooms. Our job was to work with a team to remove heavily pet-soiled carpet, a large amount of trash, and broken furniture. Unfortunately, we didn’t snap a before picture to show what the place looked like. But, we did get several during pictures and some after shots to share.

The goal of our project is to make this area safer and dryer. We’re removing the carpet which is filled with years of allergens and is unsanitary due to the pets. We’re caulking open joints in the walls to reduce draft and using enzyme products on the floor to dissuade the pets from choosing the same location for future bathroom breaks.

Here’s the master bedroom with the carpet removed. You can see that the padding is disintegrating into pieces. 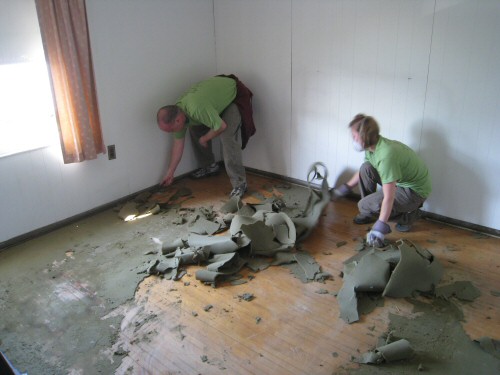 In the most soiled areas, we have to scrape to get the padding to come off of the hardwoods. 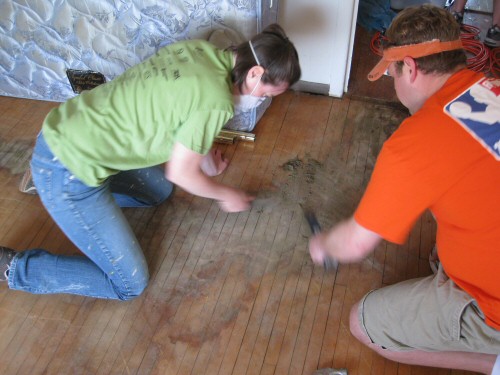 Once we got everything up we could, we scrubbed the floor on our hands and knees, and then removed the remaining dirt and dust with a mop and Murphy’s Oil Soap. 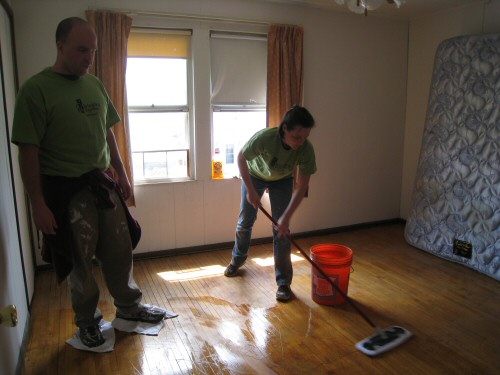 Even with our efforts, the floors aren’t going to be perfect. These are beautiful floors at their core, and with a week’s worth of effort, they could be sanded down and completely refinished. But, that’s out of scope for Rebuilding Together. It can’t be completed in a day…

The finished product looks pretty good, though. We bought the homeowner a new area rug that can be taken out and washed. The best part is what these pictures can’t show you–how fresh the air feels with the allergens removed and the enzymes doing their work on the soiled areas of the floor. 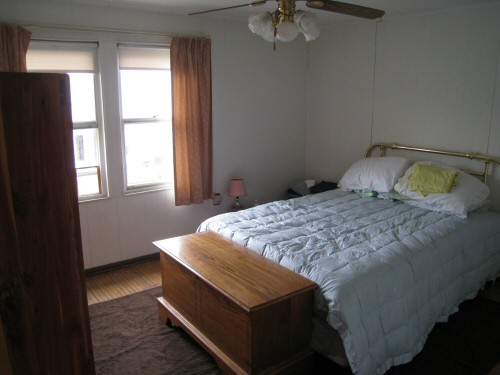 We also worked on the homeowner’s second bedroom. We removed broken and dirty furniture, took up old rugs, cleaned, and repurposed the room as storage for the homeowner’s many Rubbermaid tubs. Here’s the before and after photos: 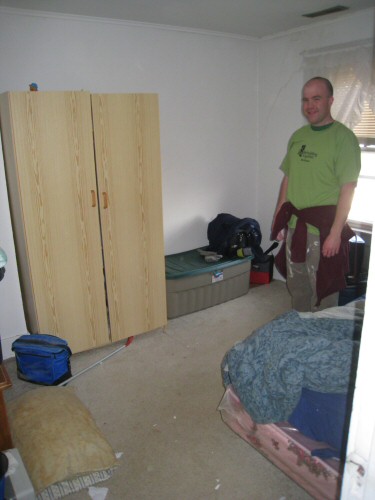 In this case, too, the most dramatic difference is in the air quality. Also, you can’t see it here but that cabinet sitting against the back wall was only holding together because it was leaning against the left wall. When we put any pressure against it, it nearly flattened. It had never been properly glued and some of the components were falling apart. Here’s the after shot of the room. 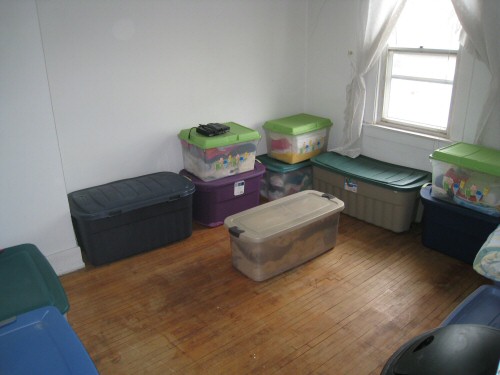 At the end of the day, when the homeowner walked upstairs, it was very moving. You could see how grateful she was for our help and how much she liked all of the improvements we made. She even called one of house captains after we all left to express her gratitude for our work.

There’s no greater reward for work than that.

Getting Involved with Rebuilding Together

If you’re interested in helping out in a Rebuilding Together project, visit the web site to learn more information about projects in your area. It’s a great way to spend a Spring Saturday. There are few things in life more rewarding then helping someone who is truly in need and grateful for the assistance.