Run Decking Boards Perpendicular to a House (Parallel to the Joists)

Why Decking Boards Usually Run Parallel to a House?

Let’s start with this question: Why do decking boards usually run parallel to a house in the first place?

The reason is that in standard installations, a ledger board is mounted to the rim joist of the house and flashed to prevent water from leaking into the house. Joists hanger are attached to the ledger board so that the joists can be run perpendicular to the house out to a girder where the joists rest, as shown in this photo. Decking boards are installed across the joists (either at a 90 degrees or 45 degrees to the joists), eliminating the possibility for installation at a right angle to the house.

There are two ways to change this deck design to allow for perpendicular decking board installation.

Install Two Sets of Girders Perpendicular to the House

The first way to change the design is to install two sets of girders perpendicular to the house (rather than one parallel to the house). The girders will rest on posts similar to those in the picture above. Joists rest on top of the girders and run parallel to the house. Rim joists cap both ends of the deck and the joist closest to the house is also fastened to the house using through-bolts. This joist functions like a ledger board, but it provides only lateral stability since other joists do not hang from it. This essentially creates a freestanding deck that is attached to the house on one side.

The disadvantage of this setup is that the girders must run all the way to the edge of the last joist, and posts will be required close to both the house and the outer edge of the deck (no more than 2 feet away). Construction is usually more expensive because more posts are required since the house cannot be used as a support.

Install 2×4 Blocking Between the Joists

Another innovative approach is to install 2×4 blocking between the joists. CTD 2005 posted some excellent photos of their deck that employs this methodology. 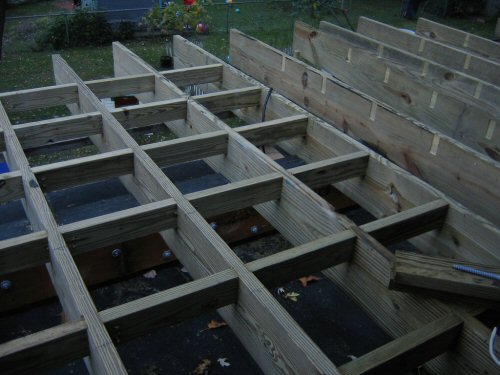 Construction begins like a standard deck, with ledger board fastened to the house and joists running perpendicular. Each joist is routed on the sides every 16 inches on center, 1/16″ deep in the shape of a 2×4. The 2x4s are pocket-hole screwed into the joists (using a tool like the Kreg Jig K4).

The result: the ability to run decking boards perpendicular to the house. This method also preserves the ability to put a rounded front on the deck (as CTD 2005 did). 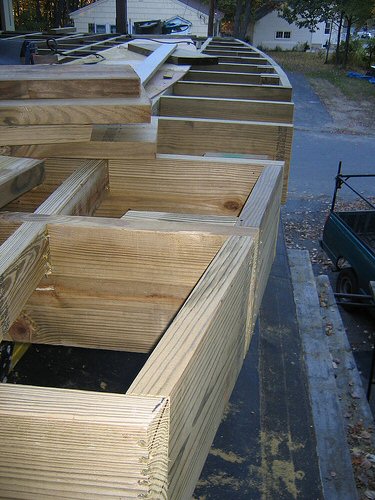 And here’s a picture of the (almost) final product, that also includes deck railing posts fastened inside the rim joist (our preferred method for installation). 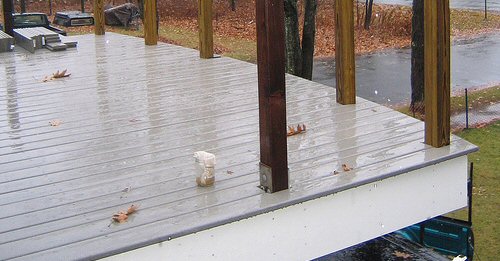 Remember, if you’re planning on building a deck, you should always contact a licensed structural engineer prior to construction to confirm the safety of the deck design. Hundreds of decks collapse every year due to poor construction. Don’t be a victim! Get the plans approved first.

photo credit: RO/LU for the standard deck in the first picture; and CDS 2005 for the last three.