On the heels of their recent lithium ion drill driver combo release, SKIL is back at it with two brand new offerings in the woodworking / capentry department: the RAS800 and RAS900 Smart Design Router Tables (official site).

SKIL let us test drive the nicer of the two tables, the RAS900.  After using the tool for one Sunday afternoon, we think their design is, indeed, smart. It’s so smart, in fact, that it made us feel a little more like professional carpenters even though we don’t do woodworking jobs on a regular basis.

Both of SKIL’s router tables were designed for the junior and mid-level woodworker–someone who wants the capabilities of a router table without the usual $300-500+ price tag.  As a bonus, for those of us without much tool storage space, both tables fold to less than 10 inches high and store neatly on a workbench or garage shelf.  Keep reading below for our full review.

Getting started with SKIL’s RAS900 table was a pretty simple task.  Total setup time was about 30 minutes, and most of that time was spent understanding all of the components that ship with the table and how they work together to perform various routing tasks.  The first major step after unpacking: mount the router.

Mounting a router: To mount a router, the table features a quick clamp mount and mounting plate designed to be compatible with all major routers (we used a 1-3/4 HP fixed-base SKIL Router).  The picture sequence below shows the mounting plate on the router and the quick clamp bracket on the underside of the table.  Once you get the hang of router installation and removal, the task can be accomplished in under 10 seconds.  Installing and removing bits requires the router to be removed from the table due to the plastic and metal skirting, so the quick-change mechanism is much appreciated. 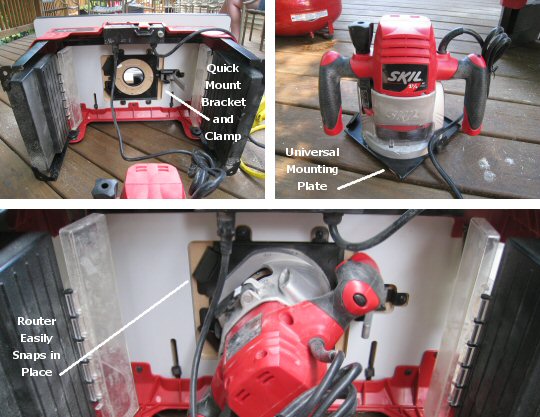 Adjusting Router Height – Once the router is in place, the height of the router bit is adjusted using the router itself (rather than the tabl).  The SKIL fixed-base router includes both a rough and fine adjustment mechanism to get the bit to the correct height.  Some more expensive tables include an automatic lift mechanism, which is a nice feature but costs hundreds more.

Performing a Channel Route – From opening the box to performing our first route took about 45 minutes.  We set up the table to cut a channel using a 1/4 inch straight flute routing bit.  The RAS900 includes vertical and horizontal guides that ensure the wood is held tightly in place. 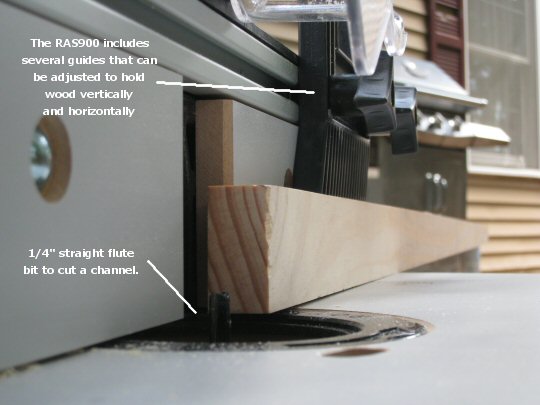 For our first route, we held the board only vertically and had acceptable results. The 1/4″ channel was uniform throughout most of the board. That said, we saw sway of about 1/32″ in some places, and the edges were not smooth.  To gain better results, we could install the horizontal guides.  Had we been working a real project instead of a test, we certainly would have done this.  Here’s an up-close look at the results:

Trying Various Edge and Channel Routes Together – We swapped bits in and out and turned a 5 ft. piece of maple several times to see how complicated of a look we could create with a few simple edge and channel routes.  We were pleased with the results, which were very uniform.  Smoothness was not perfect; however, that has much to do with the bits we employed. 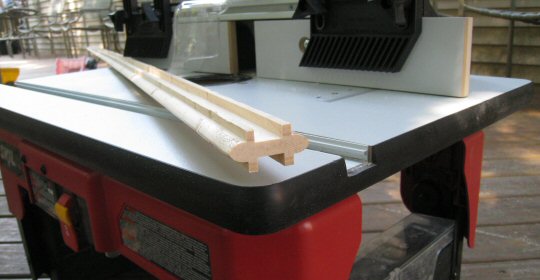 Making Simple Edge Molding: Finally, we decided to try our hand at putting a simple Ogee edge on a piece of 5 ft. stock.  The results were very good for the pretty simple route, resulting in a smooth, uniform cut.  Note that we had the bit lowered too far down into the table, so while the results were uniform, we effectively highlight the need to try a test board to confirm the router settings before routing your boards!

Performing More Complicated Routes: We’re planning to use the router table to make more complicated channels and routes, including building a coffee table and designing some custom molding using larger, fancier bits.  After test driving the RAS900, we’re confident it will be up to the task.

Perhaps the smartest part of SKIL’s RAS900 Smart Design Router Table is how the system folds up for storage.  The router guides and accessories store in the leg-based compartments, and the guide rail stores underneath the folded legs.  This keeps everything in one neatly-organized place for your next job, while the entire folding frame fits on a cabinet shelf.  Take a look:

We think the SKIL RAS900 makes a great addition to an amateur or occasional woodworker’s shop.  It offers a great combination of affordability and capability that is tough to beat in the router table market.

Other Features of the RAS900 We Didn’t Review:

What do you think? Do you own the RAS800 or 900?  Leave a comment below and let us know your experience!