Kobalt’s new Double Drive masquerades as a typical screwdriver, but under the hood, the Double Drive is actually a very innovative take on the ratcheting driver that’s been around for decades.

The Double Drive’s claim to fame is its ability to drive a screw either forward or backward, regardless of which direction the operator turns the handle. As a result, the Double Drive can drive a screw twice as fast as a traditional ratcheting driver. 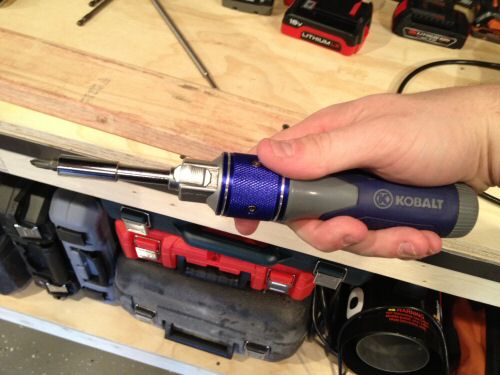 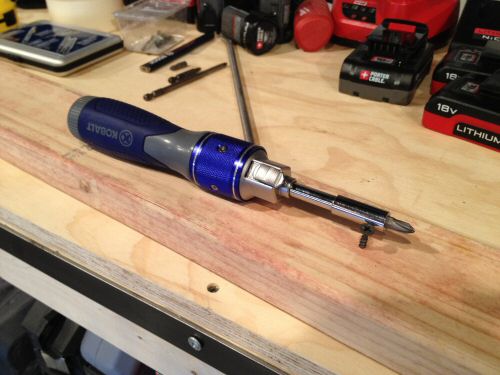 It seems like the laws of physics would prevent a screwdriver from turning the bit clockwise while the operator turns their hand counterclockwise. The way the Double Drive overcomes this limitation is by requiring a two-hand hold. For right-handed folks, this means holding the Double Drive just like you would a regular screwdriver with your right hand, and holding the blue collar around the middle of the Double Drive with your left hand. When you turn the handle clockwise while holding the collar steady, a reversing gear in the body turns the bit counterclockwise. If you let go of the blue collar, the drivers acts just like a regular ratcheting screwdriver, putting force on the bit only in the desired direction.

A directional switch towards the front of the screwdriver enables the driver to work in either forward or reverse modes, just like a traditional ratcheting driver. 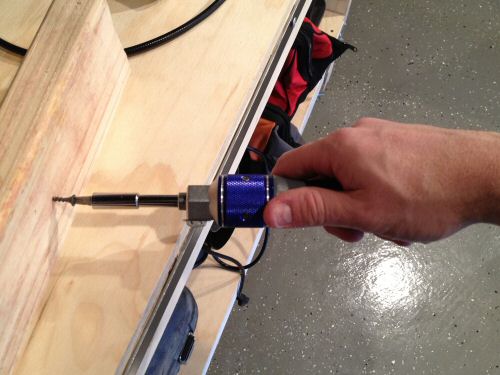 We’ve used the Double Drive on a variety of tasks, and it performs pretty well. Here’s what we liked about it:

While there were no significant drawbacks to the Double Drive, here’s some things we think you should know before purchasing:

The Double Drive is sold exclusively at Lowe’s. Pricing is $19.95 for a kit that includes the Double Drive, bits, and a flexible angle-drive attachment (that could help overcome some of the length issue by allowing you to drive at an angle). Before buying, check out our Lowes Coupon page for the latest deals and discounts for Lowe’s.

We think the Double Drive makes a great gift idea, especially since the typical enthusiast won’t already own one.

More on the Double Drive…