Two weekends ago we sealed our deck for the first time.  At the recommendation of friends, we chose Behr Premium Transparent Weatherproofing Wood Finish for Decks, Fences, and Siding.  Our primary goal in sealing the deck was to prevent cracks and splinters from developing.  A secondary, yet still important goal was to maintain the deck’s overall natural southern yellow pine look.

After reading through Behr’s weatherproofing pamphlet, we decided their Premium Weatherproofer line was the best value for our job.  Behr claims their Premium Weatherproofing Wood Finish lasts up to 4 years on decks, and 6 years on fences when two coats are applied. After examining Behr’s color choices, we decided to go with Behr’s Natural Finish (#500 in premium, #400 in non-premium).  As you can see from the picture on the right, Behr Natural #500 promises a relatively light, natural color that preserves the authentic look of a pine deck.

Editor’s Update, November, 2010: This article was originally published on June 16, 2008. We published a follow-up review on April 6, 2010 that detailed our experience with this product over time. We ultimately stripped Behr off this deck in November, 2010. The remainder of this article is contains our original review. 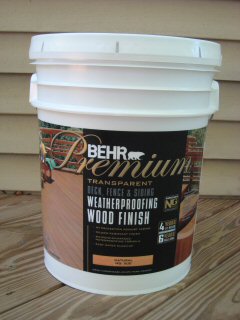 Behr Premium weatherproofer requires the deck to be completely clean of foreign debris, mold and mildew, and previous sealers.  Our deck was built 8 months ago, had never been sealed, and was relatively clean.  Kim powerwashed the deck to remove a minimal amount of residue and to restore its natural yellow pine color.  She did this without using a chemical stripper or cleaning agent.

For new and older decks that were previously stained or sealed, Behr recommends their own #64 Premium Stain and Finish Stripper.   To brighten the finish, they recommend Behr No. 63 Premium 2-in-1 Wood Prep.  For serious stains, they offer a heavy-duty stain remover: Behr #62 Premium Mildew Stain Remover.  We opted not to use any of these preparation products as our deck was in extremely good, clean condition after Kim finished powerwashing.  As a result, preparation was tedious only to the extent of the power washing.

Environment Requirements: Behr requires that the sealer be applied when outside temperatures are between 40 deg. and 90 deg., and when no rain is expected within 24 hours of the application of the final coat.  We applied the sealer over a 48 hour period.  All three days were in the mid-80s, and rain free.

Coating/Coverage Experience: The first coat is quickly absorbed into the boards and thus much more tedious to apply.  The second floats on top of the first and is thus much easier to spread.  Behr claims 300-360 sq. ft. coverage for the first coat and 600-700 sq. ft. coverage for the second.  Their estimates were accurate.  We used about 4.5 gallons to cover 1000 sq. ft. + railings. 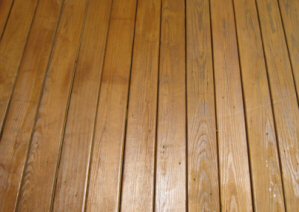 The color on the side of the 5 gallon container of Behr Natural No. 500 shows a very authentic yellow-pine wood look. This is simply incorrect. Behr Natural No. 500 dries an auburn / orange color that gets incrementally darker with the second coat. This was a major disappointment to us. When we first started applying the sealer, under a bright sun and with only a small area covered, we did not realize how auburn / dark orange it would look. We’ve since grown accustomed to the color and have gotten over the “un-natural” look. Behr certainly needs to update their color on the 5-gallon container to more accurately reflect the resulting color.

We bought Behr’s Premium Weatherproofer for $125 / 5 gallon container (or $25/gallon). This was about 30% more expensive than comparable weatherproofers, but most of those sealers only provide 2 years of protection. 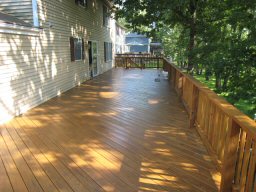 When we purchased Behr Premium Transparent Weatherproofer, we were shopping for three things: durability, authentic color, and a reasonable price. In this case, we haven’t had enough time to evaluate durability, but assuming Behr meets it’s claim of 4 years of protection, it will be very good. Behr clearly fails for color. The Natural No. 500 simply isn’t true to the color on the container. The price was high, but reasonable for a product that protects for 4 years.

Bottom line: If we had to do it again, we wouldn’t choose Behr Natural No. 500. Since Behr doesn’t make a more transparent/yellow color, we would be forced to choose another brand.

What do you think? Have you had a good experience with Behr or another deck sealer?