Here in Maryland it’s really starting to feel like summer, and that means muggy, 100° weather. It’s tough working outside, but that’s the way it goes for Steve Wartman and his crew. In today’s Pro-Follow, the guys are beginning the rough framing for the addition, and I really enjoy this part because you start the see the project take shape.

If you missed it, I’ve been shadowing contractor Steve Wartman as he tackles an in-law addition. Here’s the progress so far:

Since the last course of block had to be removed, the top of the foundation wasn’t completely level. The guys needed to re-site everything, and they ripped / planed a second bottom plate to ensure the foundation was at the same height and level. 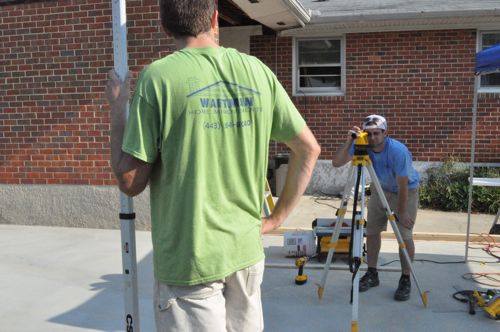 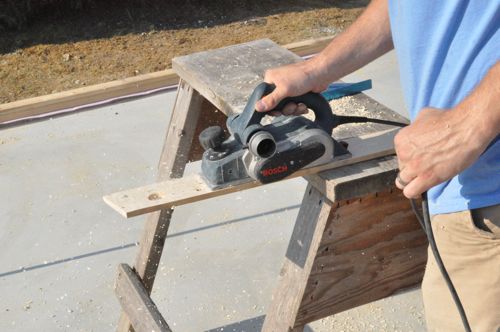 This also allowed them to conceal the j-bolts below the surface of the bottom plate. 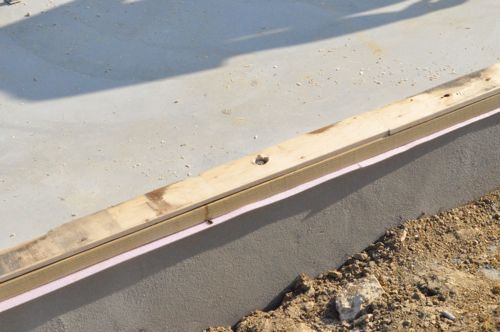 The drawings show several windows, and Steve’s crew needed to determine their exact location to build the walls accordingly.

Pro-Tip: Blueprints are typically 1/4″ or 1/8″ to a foot, and the scale is indicated on the drawings. 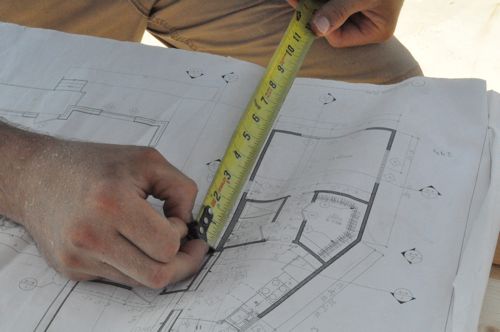 Next, the guys selected a (relatively) straight bottom plate and began marking out the location for studs 16″ on center (oc). 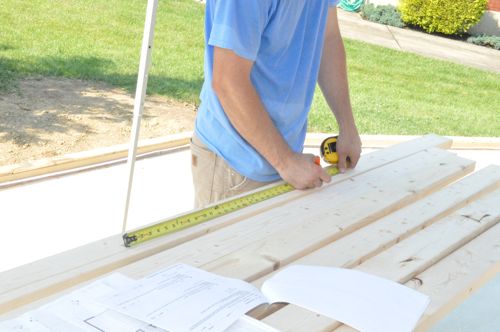 Using a square, they scribed the lines onto the top plate as well. Steve’s crew likes to indicate kings studs with a “X”, jack studs with a “J” and cripple studs with a “C” to help avoid confusion. 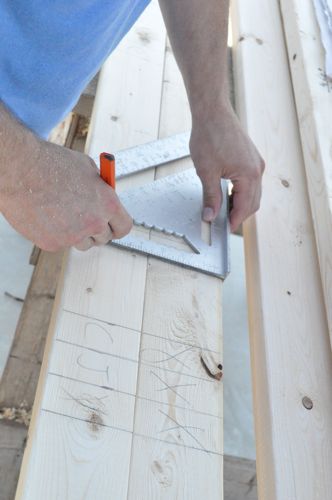 With the top and bottom plate marked out, the guys began laying out studs and making necessary cuts. They checked each board for a crown and placed the boards in the same orientation.

For big jobs like this, Steve purchases pre-cut 2 x 4″ studs to eliminate the need to cut them to size. These studs measure 92-5/8″. Adding 4-1/2″ for the three bottom plates means the walls measure 97-1/8″. When you subtract the thickness of the floor, you get 8′ ceilings. 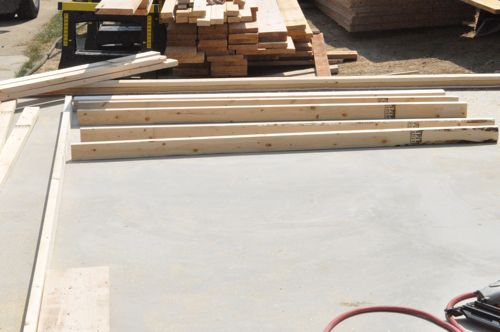 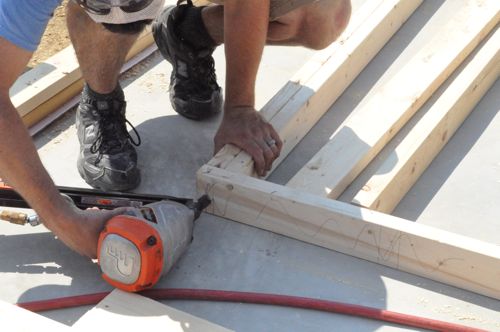 Some of the studs were slightly warped, and Steve’s crew used a Stanley FuBar to bend them into place. 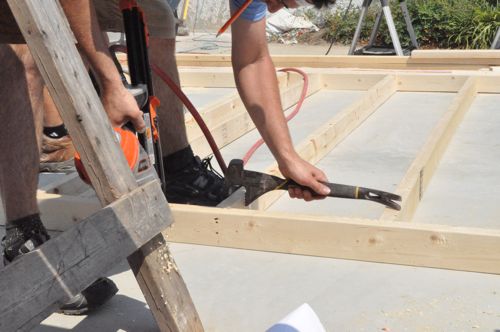 At the same time another member of Steve’s crew was building headers. To accomplish this, he would sandwich 1/2″ OSB between two 2 x 10″. The resulting thickness is 3-1/2″ which matches the width of the studs. 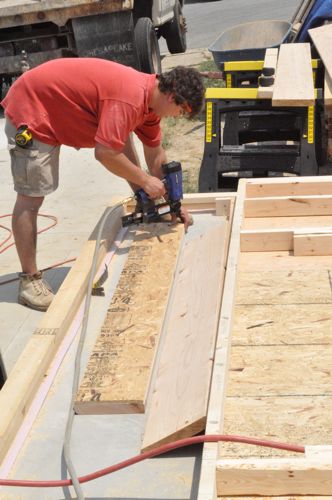 Here’s a picture of Steve nailing the header to an adjacent king stud, and you can see the jack stud supports. 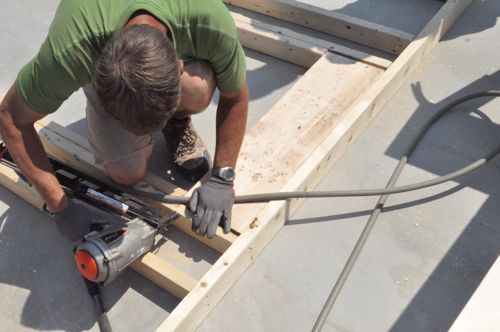 The guys worked to square the wall framing because otherwise, the sheathing wouldn’t line up with the studs. In the picture you can see that the first piece of sheathing is plywood while the second piece is OSB. Steve likes to use CDX plywood on all the corners for increased stability. 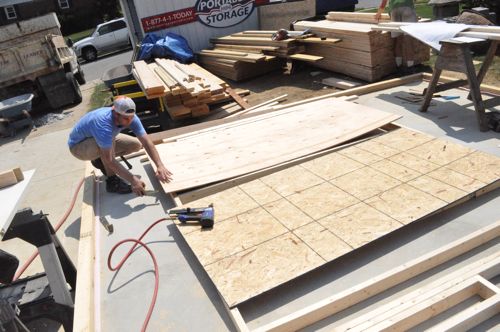 The OSB has lines, but the plywood does not. To mark studs, the guys snapped chalk lines. 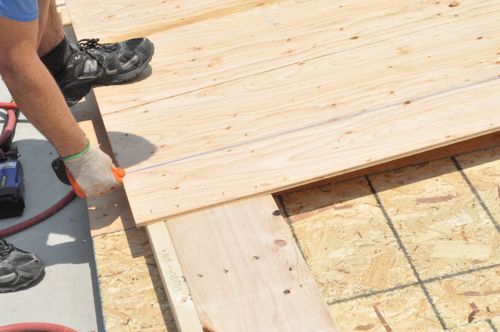 Steve’s crew staples the sheathing rather than nailing it because it provides a better hold. 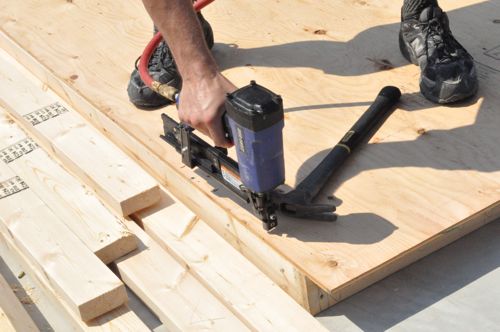 The overhang allows the sheathing to cover over the bottom plates and/or the corners. 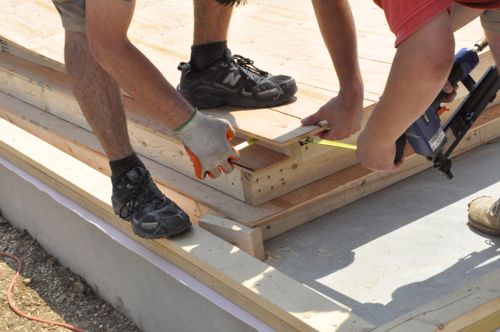 Step 5: Repeat for Other Walls

Altogether, they framed three walls in a similar fashion. In the picture below you can see they are nailing a stud perpendicular from the rest, and this is the junction for an inside wall. 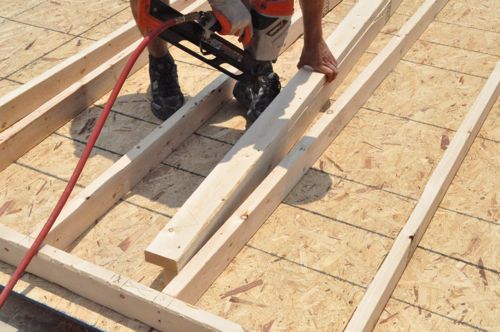 This same wall also features a triple window, and to better support the header, they doubled the jack studs on either side. 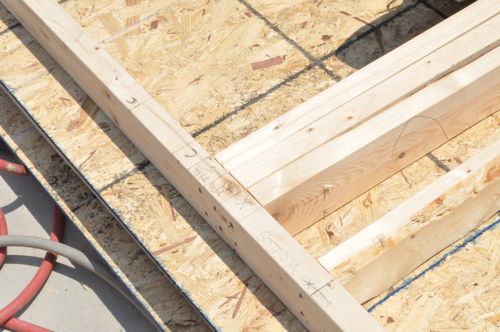 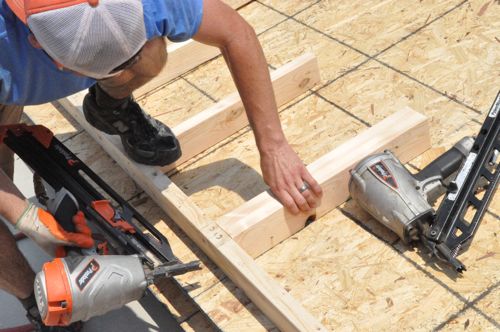 Steve’s crew built each wall (stacked) with the bottom positioned so they could easily lift it into place. 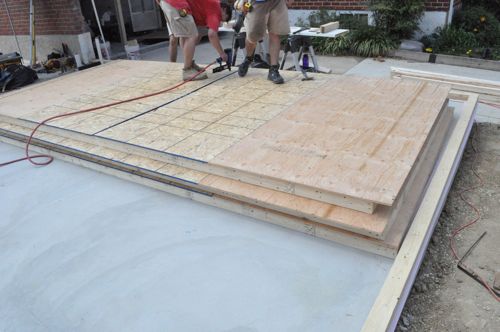 After the framing was finished, the guys carried the walls into place. 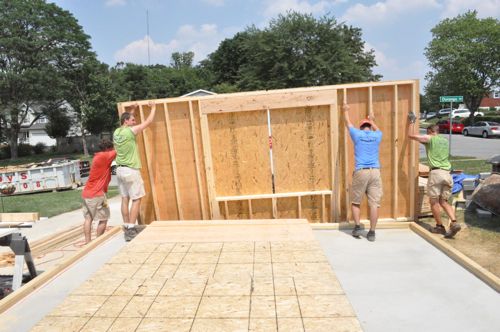 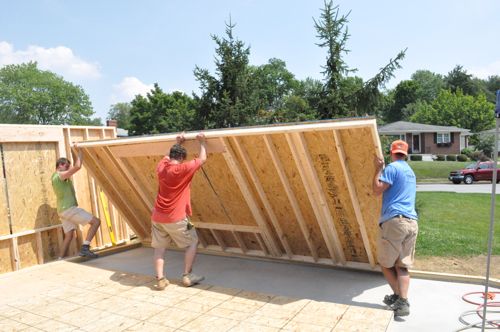 They secured each wall by driving nails into the bottom plate. 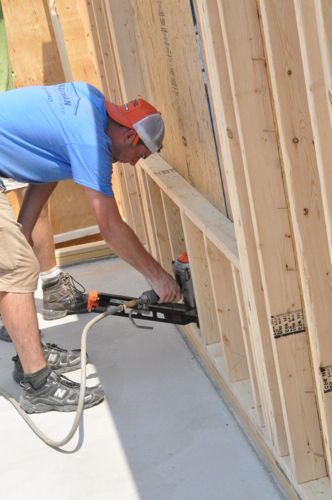 Next, the guys setup a support beam. They checked the wall for level and then nailed it to keep the wall from moving. 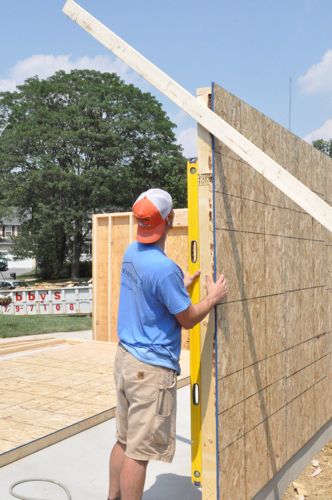 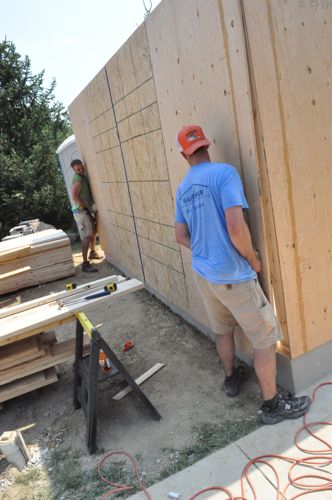 That’s all for today’s Pro-Follow. Tomorrow the guys will continue the rough framing and soon they’ll be starting on the roof. Stick with us!