There’s really nothing worse on a hot, humid Summer day than to have your central air conditioner give out.  Unfortunately, that’s just what happened to us about three weeks ago right after our hardwood flooring installation.  The temperature in the house started climbing steadily beginning around 6:00pm, rising from a relatively cool 73 degrees up into the mid-80s.

While I’m not an air conditioner tech, I can check the basics of an air conditioning system (air filter, blown fuses, ice build-up, etc).  The skill comes in handy when you contact an HVAC technician. It’s much better to be able to tell them, “I’ve got ice built up on the inside unit” than to simply say, “It’s starting to get hot in the house.”  They’ll be able to give you some potential causes of the problem and expected costs for repair.

So I started checking what I knew to check. Step one was to pull out the air filter, which was soaking wet and was stuck on something inside the unit.  In fact, it was so stuck it wouldn’t come free and I thought continuing to struggle with it might rip it apart.  I decided to open the upper access panel that houses the interior air coil and here’s what I saw.  Problem identified. 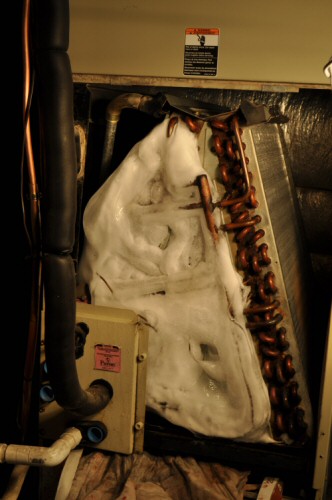 We’re no stranger to frozen outdoor air conditioner compressors. In the Winter, it’s not uncommon for an outside compressor unit to freeze up if the defrost cycle on the unit is set to run too infrequently. Freeze-up can also take place if freezing rain or snow accumulates on the fan blades, or is allowed to sit on the exterior of the unit.  Fixing an outdoor frozen heat pump can be as easy as setting the defrost cycle to run a little more frequently, which did the trick for us.

Of course, in the Summer the situation is reversed. The system extracts heat from the inside of the house and moves it outside. In this scenario, the air coils inside the interior air handler get very cold, with evaporated freon moving through them.  Air passes over these coils and most of the time, you get cool air conditioning in your home.

So what causes an interior air handler to freeze up instead of operating normally?

There are two common causes for freeze-up, and one is less expensive to fix than the other.  The first cause is a freon leak in the system. When a freon leak is present, the coils can cool unevenly with some parts of the coil staying extremely cold for a long time.  This leads to build-up of ice on the coil from the moisture extracted from humid air passing over it.  Once the ice starts to build up, it easily persists because it acts as an insulator on the coil, preventing air from passing over the coil and warming it up.

Since we had just finished that hardwood project, we figured the dust blown around in the house was probably the culprit, and at least worth checking before making a call to the technician.

How to Fix a Frozen Air Handler

The easiest way to melt the ice is to allow the fan to run without the air conditioning on for 24-48 hours.  You must let ALL the ice melt before turning the A/C back on, otherwise the problem will quickly return.

Unfortunately, we were in the middle of a terrible heat wave and didn’t want to wait 24 hours for a solution. So we used the faster method: a hair dryer and two 500-watt halogen lights. The process took 2 hours to get the air handler completely dry.

Note: You should always turn off the breaker to the HVAC unit before working on it.  Also, using a hair dryer and/or heat lights could be a fire risk if you aren’t careful.  So be careful and do this at your own risk!

It is imperative that you don’t disturb or break the coils inside the unit.  One broken coil will mean a much more expensive fix. 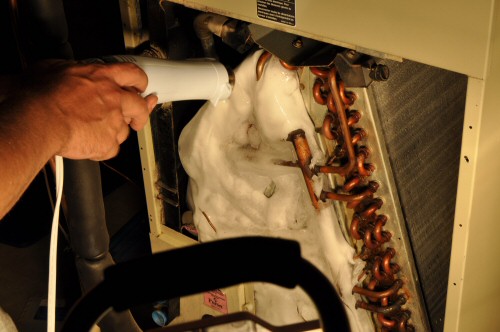 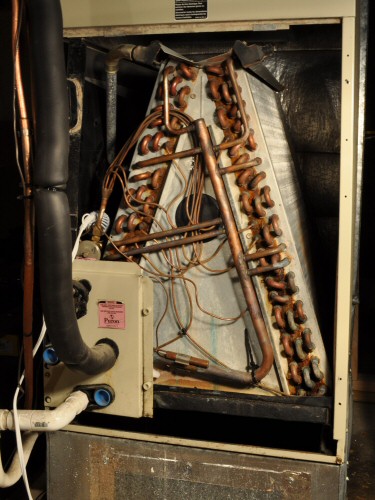 We turned the unit back on and nearly instantly the cold air came rushing through the house.

In the three weeks since the event, we’ve had no recurrence.  It looks like the air filter did the trick, saving an expensive HVAC technician call and confirming that we probably do not have a freon leak. Had the unit frozen back up, we would’ve called our local air conditioning contractor to come take a look.