How to Make a Felt Advent Calendar 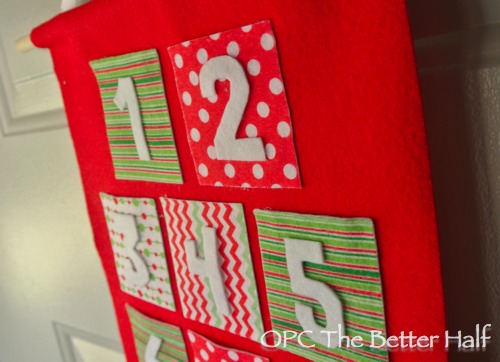 Last year I made a paper advent calendar. It was really a special time for our family that we used to move the focus of Christmas away from presents on onto Jesus, family, and togetherness. Each day we would read the Christmas story and act it out using the plastic Nativity set from my mom. Then, we would read that day’s activity from the calendar. Izzie LOVED it. Seriously, about once a month since last Christmas she asks when it will be #6 with hot chocolate!  lol! I guess that was her favorite advent activity. 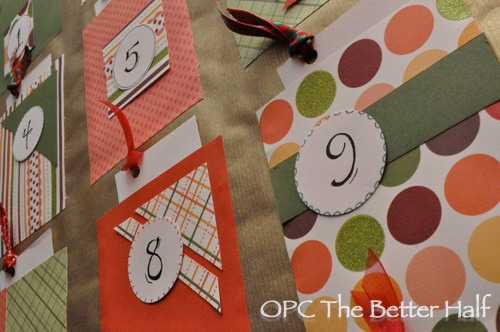 While the paper advent calendar worked in a pinch and was super cheap), I wanted a calendar a bit smaller, more colorful, and still cheap! haha Don’t worry, the paper calendar isn’t being sent out to pasture; it will be going to love with my cousin.

This felt advent calendar took slightly more time than the paper calendar since I cut out all the felt numbers but the time was comparable. And while a little more expensive, it still only cost about $5 to make, maybe less.

In addition to the large piece of felt, I bought a holiday pack of felt with assorted colors and patterns. I think it came with around 20 sheets, but I only used 5 – 4 patterned for the pockets and 1 white sheet for the numbers. (If I used the same color for the pockets, I would have only used about 3 sheets of felt.) 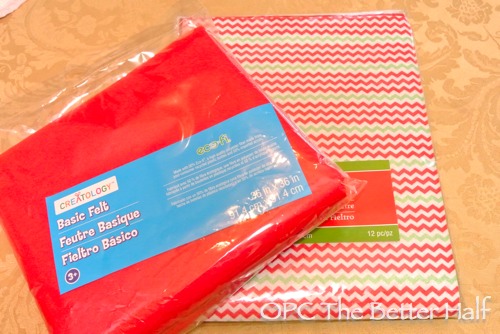 Once I determined the general shape and layout for my calendar, I started cutting the pockets. The size of the pockets (felt rectangles) didn’t matter much as long as they were all the same size. I eye-balled it, cutting one template and using that to cut the rest the same size. The pockets ended up being about 2.5 x 3 inches. I cut 25 of these using 4 different patterns. 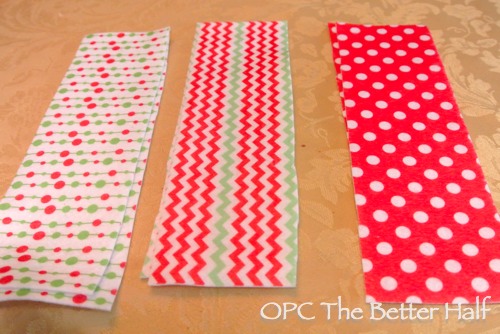 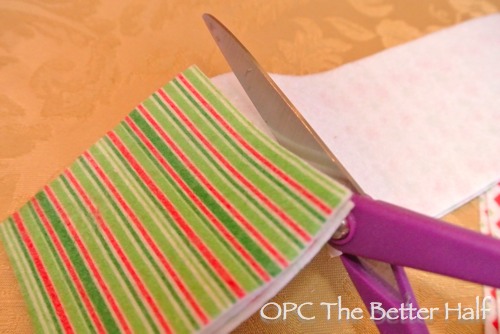 After the rectangle felt pieces were cut, I went about cutting out numbers. Michael’s sells pre-cut felt numbers along with letters, but I would have had to buy multiple packages to get enough of the frequently used numbers (1 and 2). So to save some money, I just cut them out myself. This was definitely the most time-consuming part, although easier than expected.

I cut small rectangular pieces of white felt approximately 1.5 x 2″, enough for numbers 1 – 25. I used these felt rectangles as the general shape of the numbers so that they were all the same size.

After A LOT of cutting and little pieces of felt all over the dining room, I laid out the pockets and numbers on the red 36 x 36″ felt, giving special attention to the spacing of the pockets and the pattern of the different pockets. I also left a large space at the top and bottom for the dowel pocket. 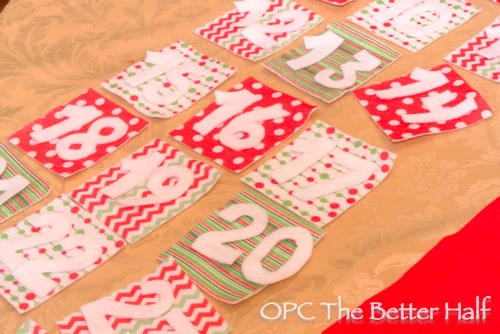 Then, I started gluing. I started with Elmer’s because I didn’t have any felt glue on hand. It didn’t work great – some parts stuck and others didn’t, so I ended up going back and using hot glue, especially on the pockets. 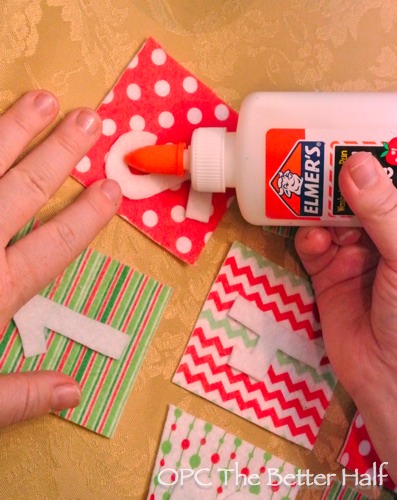 When gluing the pockets, I glued back of the felt rectangles only on the two vertical sides and along the bottom, using the felt backing as the back on the pocket. 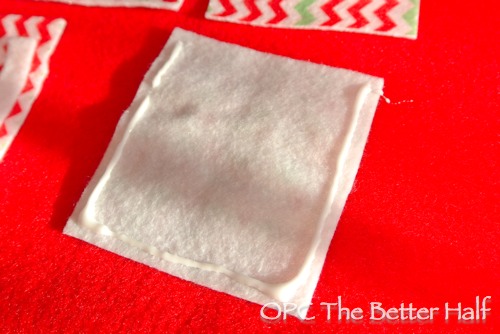 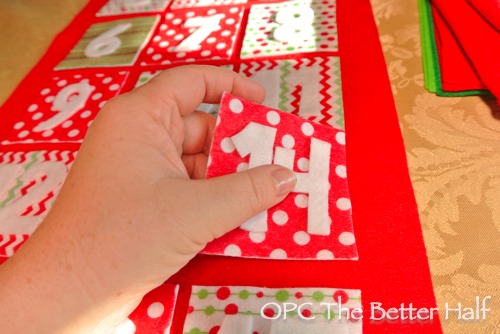 Once the pockets and numbers were glued and dry, I cut the red base felt on the sides so there was a 2 inch margin on each side – about 12 inches wide.

I then grabbed a hand saw and cut the dowel into two pieces about 15 inches each. I then placed the dowel at the bottom of the red felt (face down). I then wrapped the felt up around the dowel to create a pocket and hot glued the bottom edge in place. I did the same process for the top. 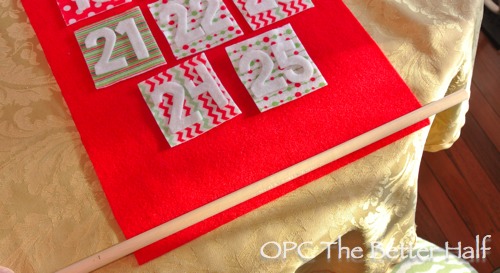 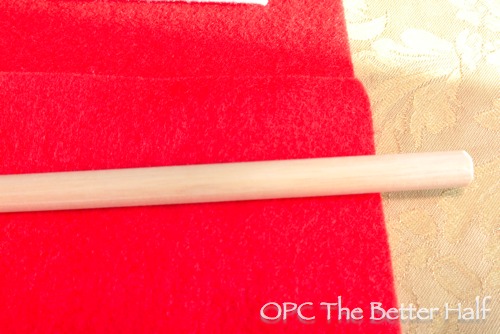 Finally I added a ribbon and hung it up! Right now, its hanging on our door because I waiting on a trip to the store to get some more Command hooks. 🙂 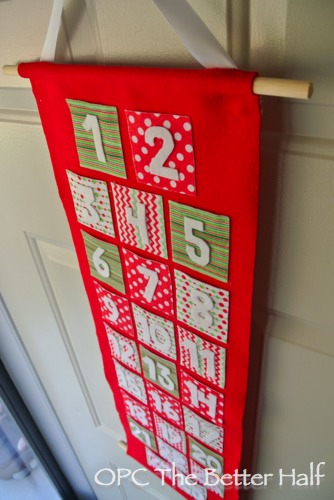 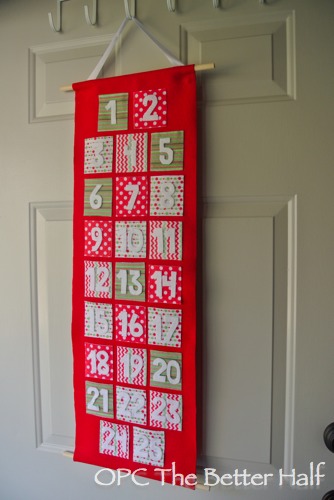 I filled the pockets with daily advent activities for the season and now its ready for December 1st. For all our advent activities, check last year’s post and making the paper advent calendar. 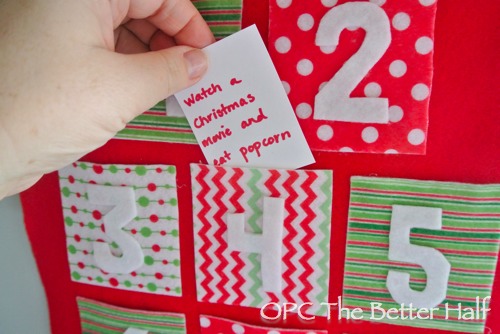 Do you do an advent calendar? If so, what kind and did you make it?