How to Get New Grass to Grow in the Heat of Summer: Seed With Potting Soil

The best time for seeding your yard is very early spring or else mid-fall.  However, we are working on re-vitalizing our rental property this month, and it is neither of those times.  So I used a tip I’d heard to get our grass to grow even as the sun bakes the yard every day.

Pets are Hard on Grass 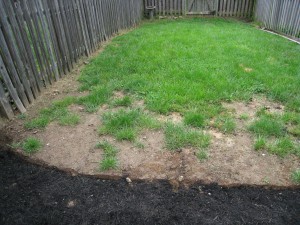 I mentioned in a prior post that our renters had pets and that one of the hard-hit areas was the back yard.  After 5 years of dog droppings, the lawn was full of bare patches, and the area closest to the patio was completely dead.  Knowing that the soil in these spots was probably saturated with urine even after I picked up the (Walmart shopping bag full of) poop, I decided not to try to get the new grass to grow in the existing soil.  Not at first anyway. 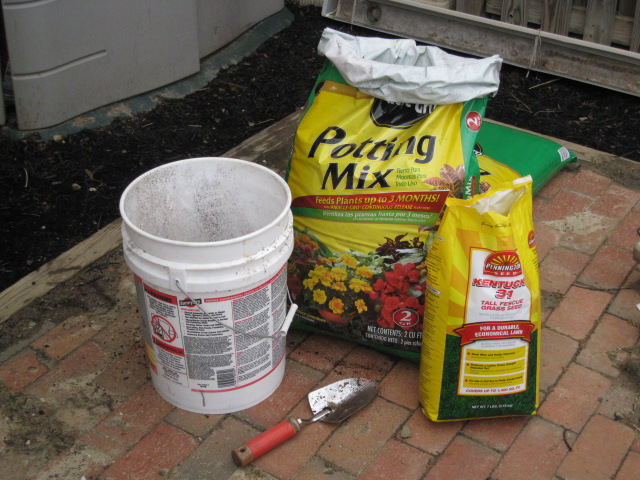 I purchased a bag of seed and another larger one of potting soil and used a 5-gallon paint bucket and a trowel to mix the two together. (Potting soil has two benefits over topsoil, which is most commonly used: it contains fertilizer, and it tends to retain moisture a little better after watering. Both help the the new roots’ growth.)

Spread the Mix Over the Bare Spots 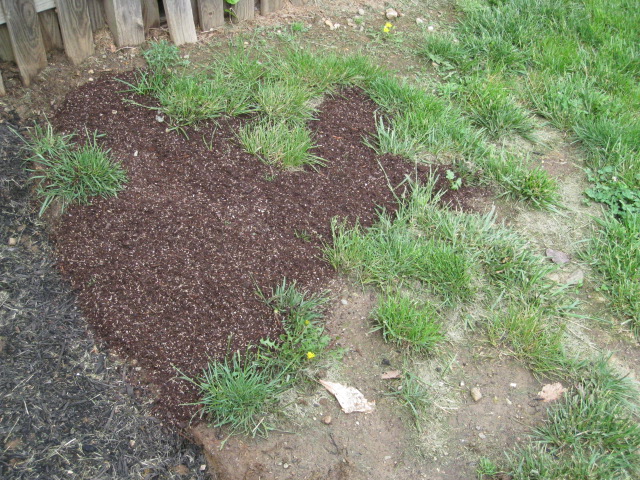 I mixed five trowel-scoops of seed into about 4 gallons’ worth of soil in my bucket, then spread the mix about 1/2 inch deep over every bald spot.  For anyone looking to replicate this in your yard, you can probably use less seed.  As I was mixing, I noticed that the neighborhood birds were starting to gather on the fenceline, so I over-indulged, figuring there’d be some left for my yard even after they were done picking away as was clearly their intention. 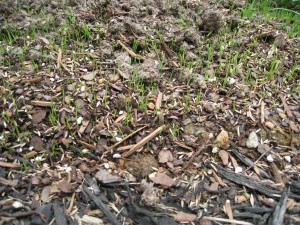 After spreading the mix, I returned every day to water the yard.  For the better part of the first week, I saw nothing.  Then, on day 7, very tiny grass “stubble” broke the surface.

Grass will Grow in 7 Days 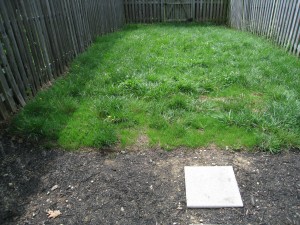 In the second week, that grass has grown two inches!  So has all the old grass around it, so we’re going to need to mow very soon.  For THAT process, we’ll set the mower’s blade at its highest setting and then continue the daily watering for at least the first few days thereafter.  Then I’ll switch to less frequent watering until the grass seems to be sturdy.  The goal is to make it as easy as possible for the new root structures to grow down deeply enough to sustain the grass even through summer dry spells.

Aside from the hassle of driving over to water the grass every day, this was a pretty simple and inexpensive process.  So if you don’t mind the hose-vigilance (and you’re not living under a county water ban), seed those bare patches!  It’s great to see the change in a relatively short period of time! Click here to learn more about controlling weeds in your lawn and how to spread weed and feed.