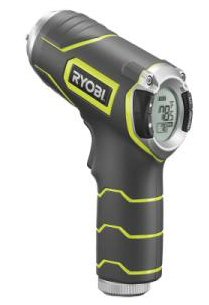 In September and October we told you about Ryobi’s Durashot Tek4 digital camera and Tek4 Professional Multimeter, two of ten tools that comprise Ryobi’s latest line of 4V Li-Ion gadgets.

As I wrote in the digital camera review, the concept behind Ryobi’s latest tool line is simple: build tools that would normally be powered by double-A or triple-A batteries and equip them for a universal, rechargeable 4v Li-Ion cell instead. Ryobi claims each one of their Tek4 Li-Ion batteries can be recharged 2000 times, for a savings of more than 4000 traditional alkaline batteries.

As part of the test kit Ryobi shipped us for review, they also included the Tek4 digital infrared thermometer (official site). The thermometer measures the heat of an object across the room by sending an infrared beam and measuring the variations in its reflection. The result: the ability to quickly measure temperatures at a distance.

Basic Features: The thermometer itself is very simple to use: just point and click. As long as the trigger is held, the thermometer will take a measurement about every 1/2 second. To help identify the target, the Tek4 is equipped with a red laser beam positioned above the infrared beam. Measurements are reported in Fahrenheit or Celsius at the user’s option.

Besides reporting the temperature of the target, the thermometer will record the minimum or maximum of all the temperatures scanned since the trigger was pressed– a feature useful for finding the coldest or hottest point of an object by moving the laser beam across its surface.

Advanced features: Beyond the basics, the Tek4 includes a memory/logging function that will record up to ten temperatures. We found the function to be a bit difficult to use. When you record a temperature, the previous recordings are moved down in the log by one slot. If you were taking a series of temperatures, you’d have to remember exactly how many you took to be sure you were reading the log correctly. The log cannot be cleared to reset the unused numbers to blank. We’d prefer a different system that allowed for clearing the memory and select the log # to store the measurement, but we’re also just as content to record our measurements on paper.

Accuracy of Measured Temperature: The Tek4 claims an accuracy of +/- two degrees Fahrenheit. We made several measurements on approximately-known temperatures (for instance, our refrigerator and freezer which self-report temperature), and found it to be accurate within this threshold. The thermometer was consistent when we expected it to be (down to the degree on re-measurement of objects in the same time period).

One issue we encountered was a dilution of accuracy at distances when measuring non-uniform objects. This occurs because the infrared beam spreads out as it travels further from the gun, while the laser does not. The laser gives the impression of a point measurement when at 12 feet, the measured surface area may exceed a few inches and an average measurement is returned. This flaw is characteristic of all but the most expensive IR thermometers, for which the Tek4 is not a competitor.

Much like every IR thermometer, accuracy will vary within temperature ranges. We did have not the equipment to determine the variations, but for almost every practical use, the exact temperature is irrelevant anyway.

Battery Life: Battery life was good (in fact, we never ran the batteries out – probably because the thermometer doesn’t draw very much juice). The batteries can be swapped with other Tek4 products and can be recharged in 5 hours using the standard charger (included), or 36 minutes in the optional quick-charger.

Ergonomics: Much like the other Tek4 tools, the infrared thermometer is rugged and easy-on-the hands. The grip is great, especially for medium-to-large hands (and actually, our 5-year old boys had no trouble mastering the technique with their smaller ones). 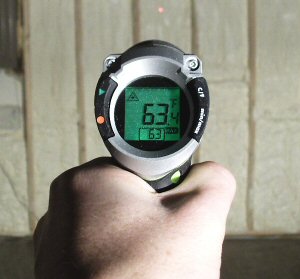 These types of thermometers are old hat for HVAC technicians measuring the temperature at vents and radiators, and are great for this purpose.

Besides novel uses for homeowners like determining the heat of a CFL light bulb (185 degrees F at the hottest spot by our measurement), or of a halogen work lamps (538 degrees), we think this thermometer is great for identifying the major causes of heat loss in your home.

For instance, on cold winter nights, you can point this thermometer around the room and see the areas of wall that are the coldest and should be better insulated, or the source of drafts that could be plugged (e.g., around doors and windows, near outlets, or at attic door entries).

We also used the Tek4 to determine the temperatures of our refrigerator and freezer, and to find the coldest and warmest spots in both (the top was about 5 degrees warmer, and the variation became more dramatic as the door remained open.)

At $69.97, the Tek4 IR thermometer is priced firmly middle-of-the-pack. If you’re in need of an IR thermometer, we think this one makes a lot of sense, especially if you plan to purchase other Tek4 products and can swap the batteries between them. Tek4 products are sold exclusively at Home Depot.

What do you think? Have you experienced this IR thermometer? Let us know in the comments.

Note: Ryobi provided us this Tek4 product free as part of a test kit. Our reviews are objective and we are not compensated for a positive review.