We just received our energy bill for December and January; this is the first bill that shows the full effect of installing spray foam insulation in our basement.

Recall that last year our basement was entirely uninsulated. The only thing between us and the elements were cinder blocks with basement waterproof sealer applied to them.

Our first floor flooring was freezing, and the entire house was drafty. Ultimately, we selected closed cell spray foam from a variety of basement wall insulation options.

We had a local spray foam contractor install the insulation and our subjective experience since then has been great. (In fact, the basement is now the warmest room in our house). Until now, we didn’t have any objective proof that the investment was worth it.

This energy bill confirms our subjective experience with facts. Take a look (click the picture to enlarge and make the numbers legible)… 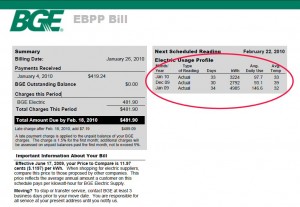 Last January (2009), you can see that our average energy use for the house was a whopping 146.6 KWh / day! This January (2010), our energy use drops to an average of 97.7 KWh / day. This represents about a 33% energy savings, despite the fact that this year’s daily temperature average was 1 degree colder.

Our house is in approximately the same shape as last year, with the same number of people living in it. There are a few differences in the house:

Other than these two differences, the house is in approximately the same shape as last year, with the same number of inhabitants. In other words, we think the bulk of the 33% savings is directly attributable to the spray foam insulation.

The best part: 30% of the cost of the insulation material will be refunded to us this year through the U.S. Government’s tax credits for energy program.

This makes our payback period for the insulation less than 3 years, and potentially even less than 24 months, depending on how the foam performs in the Winter.