We’re following professional contractor Steve Wartman as he walks us through the process of building a deck. In the first installment of this series, we covered planning, digging, and pouring concrete footers, as well as securing the ledger board to the house. Today’s article covers setting two rows of posts, running support beams between the posts, and installing the joists.

Since we left off, the local building inspector came to the work site to inspect the footers. In this jurisdiction, this is the only required interim inspection. The inspection included checking that:

The inspection went very smoothly, and now Steve’s crew is ready to start on the posts. The crew is using pressure treated 6x6s for posts on this deck. These 6x6s are rated for “ground contact”, which, as you might expect, means they can be buried directly in the ground.

Tip: The size of posts required for a deck installation depends on the span being supported by the post, as well as the height of the deck. Steve’s crew prefers 6×6 posts for their sturdiness; however, 4x4s may be used in certain low-height installations. In certain very tall installations, cross-members may be required between the posts for added support and to prevent racking. In the final How To we produce from this deck build, we’ll provide several resources that can help you understand the support structure requirements based on a specific deck design. 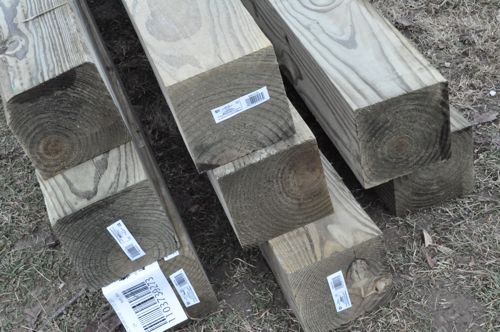 The challenges with installing deck posts include keeping each post:

The crew moved the first post into place and marked a line indicating the very top of the post. The reference point on the ledger board is where the floor joists will sit. (The post should be no taller than the joist.) 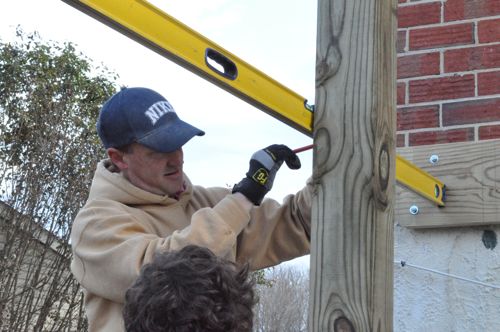 Using a circular saw, they cut the post to the proper height, based on the previous measurement. 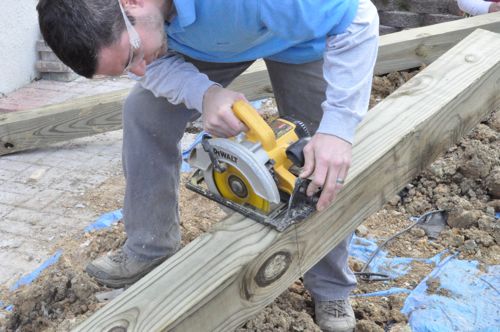 Using a reciprocating saw, the crew cut a notch for the support beam. 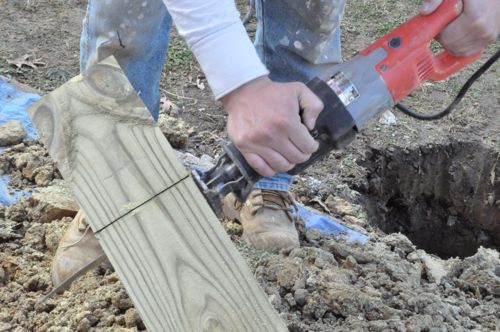 The support beams consists of two, 2×8 boards nailed (and later bolted) together. These boards sit side-by-side in this notch. 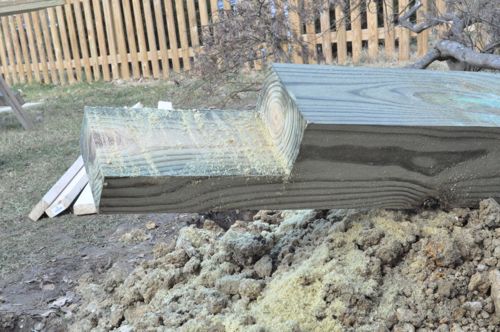 Tip: You may see support beams where the deck post is sandwiched between two pieces of 2x material. The method we describe here is better, because when the two boards are touching, they act as a single board. Furthermore, separating the 2x material requires additional blocking in between the joists to support bolting, and therefore, longer bolts.

Now that the post is cut to the appropriate dimensions, the crew moves it into place, and secures it with temporary boards. This is a somewhat tedious activity that requires several pairs of hands and repeated measurements. 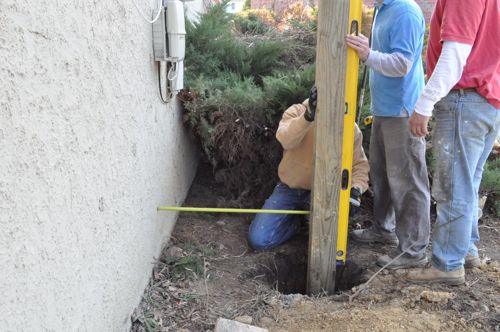 The crew repeats the process for the middle post, and, after it’s in place, adds one of the 2x10s that will be a part of the support beam. This allows them to double-check level and distance from the house across the entire gap, and make adjustments as needed to each post. Again, this process is tedious, but extremely important for the finished product. 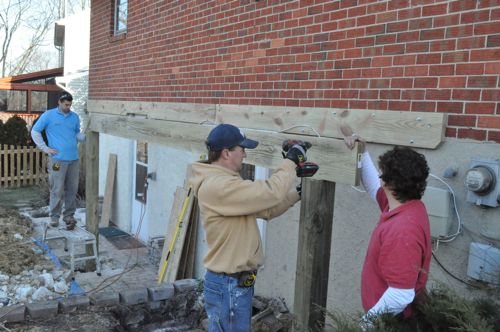 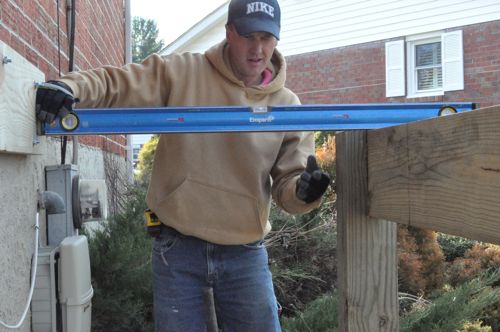 This process goes on for all five posts in the first row, which is the row closest to the house. The middle post is also where two support beams butt against each other. The transition is accomplished by equally dividing the space in the notch between the two beams. 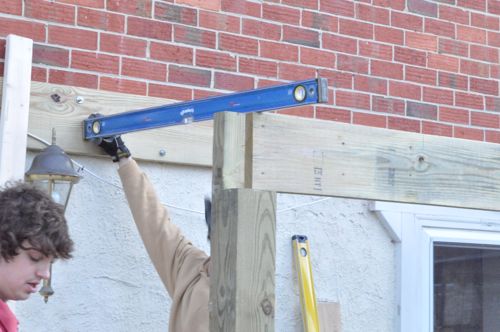 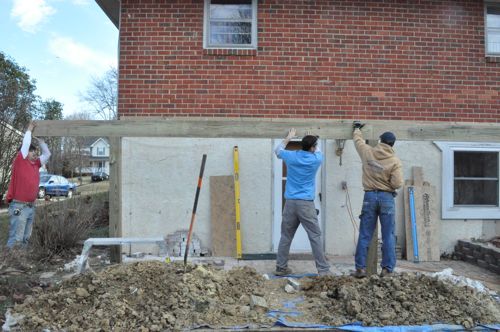 In this picture, you can see all the temporary boards that keep the posts and support beam in place. 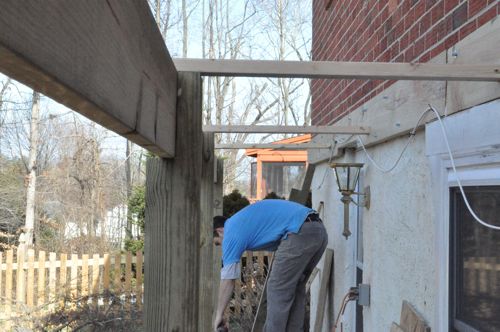 Once the crew is satisfied with the entire row, they back fill the dirt and tamp it down, ensuring not to move the post. Any movement requires additional measurements to ensure nothing has moved out of square with the house or the other posts, and that the post is still at the proper height. 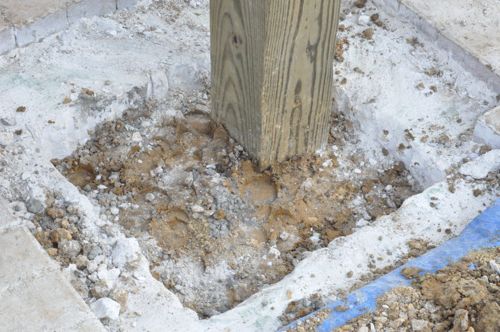 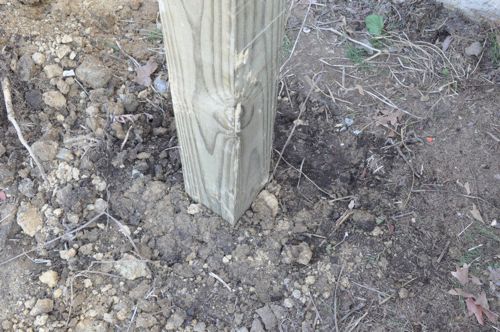 The second row of posts goes in much the same fashion except for one thing. Since the crew has the ledger and first row finished, they can add a few joists and run a string guide to make it easier to setup the rest of the posts. It’s also important to note that they established a 3/8″ slope that will direct water away from the house. 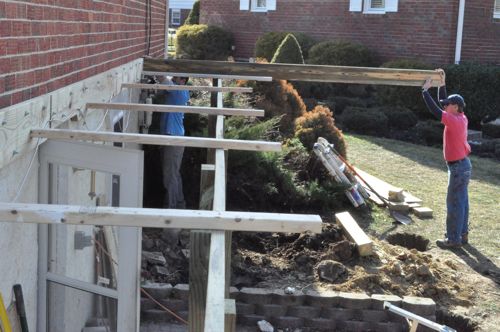 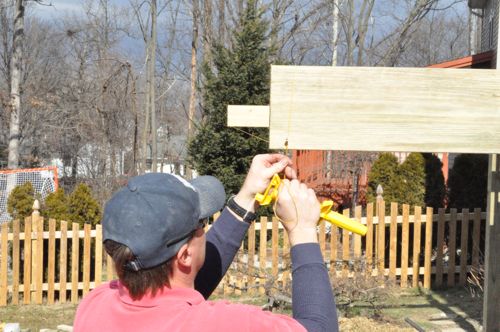 Once the crew set a few more posts, they ran a tape measure along the diagonals to make sure the deck was square. 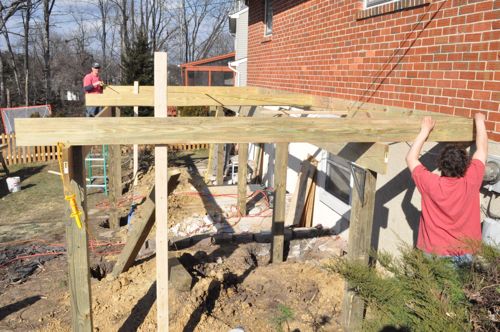 Here’s a picture of a crew member adding that second 2×10″ to form the support beam. 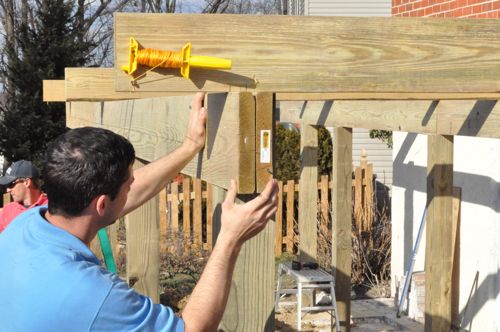 These two beam components were later secured with staggered carriage bolts through the post. 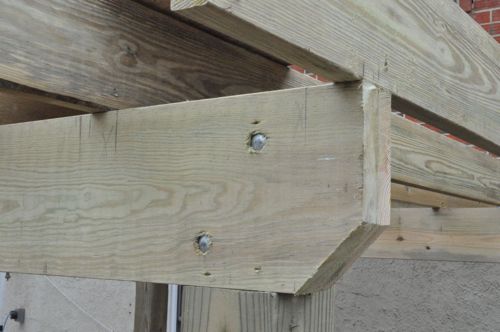 Since the ledger was already marked during Day 1, lining up the joists was not a difficult task. 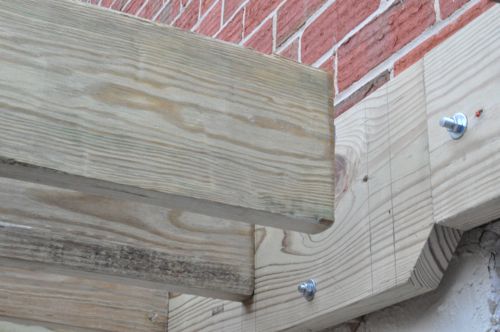 Here you can see the crew once again making sure the joist is square to the ledger. The importance of re-checking square measurements cannot be overstated in a deck build. If components start out of square, it will be hard to make the deck look good at the end. 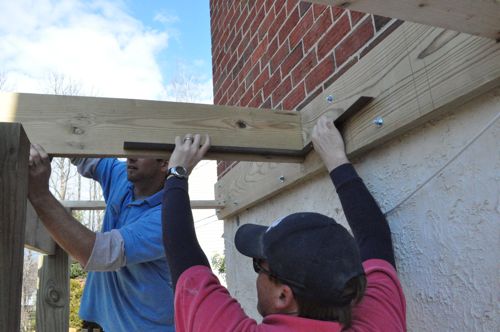 Tip: Joists should always be placed “crown up” in an installation. All joists must be oriented identically in this manner to ensure the deck won’t have waves between the joists. In our tutorial on How to Build a Shed, we provide a video on checking and marking dimension lumber to identify the crown.

The crew did break out a planer at one point because they found a few boards were thicker than the others.

Tip: Double-check board dimensions, because you may find some variation in your lumber package. Never assume that all joists are exactly the same dimensions. 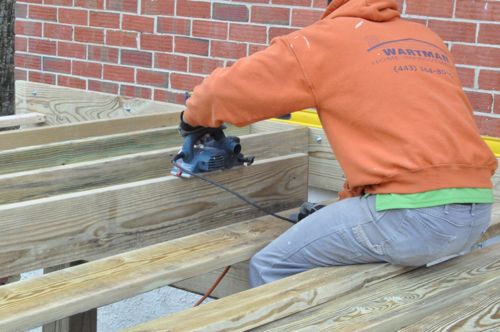 The crew toe nailed each joist in place with four nails, and then added a hanger tie. 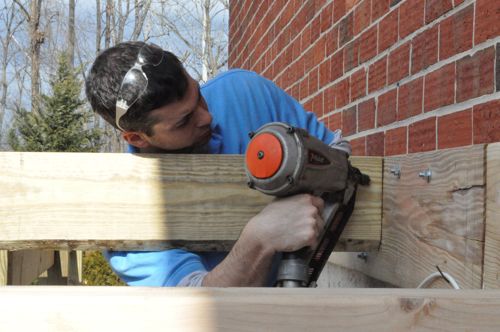 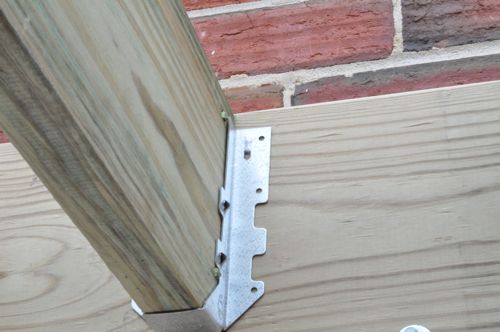 It was fun to see the crew use this palm nailer for fastening the hanger ties. It made driving the 10 nails into the hanger very quick–much quicker than could be achieved with a regular hammer, which is an acceptable (albeit much slower) alternative. 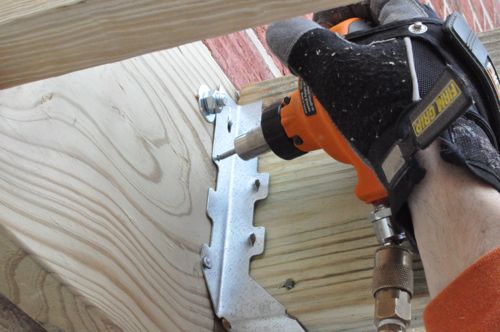 These are the nails used with the hanger ties. The shorter nails (N10) are for securing the hanger to the ledger, while the longer nails (10d) are for the angled slots. Using the correct nails for hanger ties is very important, as the strength of the hanger is dependent on using the appropriate hardware. 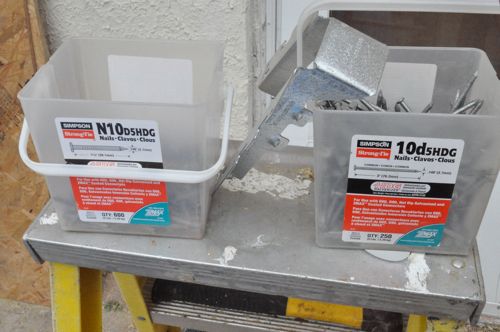 As you may remember from Day 1, the crew planned the joist spacing at 12″ oc since they’ll be installing a manufactured composite decking surface. For traditional 5/4 pressure treated wood surface deck, 16″ oc is more common. Joist spacing depends on both surface material as well as spanning distance between the posts.

Terminology Fact: The term “5/4 lumber” is shorthand for lumber that is nominally 1.25″ thick (or 5/4s of an inch).  5/4 lumber is actually finished to 1-1/16″. The type of 5/4 lumber used on decks has rounded edges and is known as “decking board”. Composite decking material is generally the same size as 5/4 lumber (or close to it). 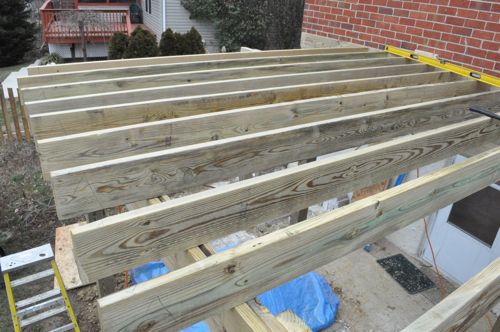 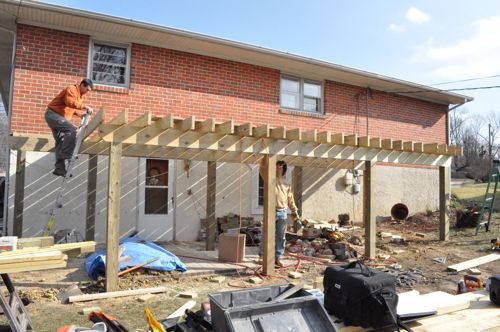 This deck is starting to really come together! In my next update, I’ll be sharing how the crew installed the band board, added blocking between the joists, and built the stairs.

As we get closer to completing this project, I’d love to have Steve field any questions you have. Feel free to ask them in the comments.